We use cookies to provide you with a better experience. By continuing to browse the site you are agreeing to our use of cookies in accordance with our Cookie Policy.
Home » iba 2018 booth previews

MUNICH — With an expected crowd of about 80,000 attendees, this year’s iba, scheduled for Sept. 15-20 in Munich, is stacking up to be the biggest yet. With 12 separate exhibit halls, the seemingly limitless expanse of show floor can make a person’s head spin. But in one hall, bakers from the United States will find a welcome respite.

The show’s U.S. pavilion hosts 39 exhibitors from the United States in the B1 exhibit hall. The American Bakers Association (A.B.A.), BEMA and the numerous North American companies are planning events and establishing spaces for bakers to interact with U.S. suppliers. There also will be educational experiences presenting consumer and trend data from around the world. It’s a home away from home for American bakers who have traveled to the international show.

The A.B.A. and BEMA are hosting the IBIE Lounge, which has grown significantly since the previous iba in 2015. Kerwin Brown, president and chief executive officer of BEMA, said the lounge was designed to inspire collaboration. It’s a space where visitors can schedule meetings and take a few minutes to rest, recharge and get refreshments. And the location of the U.S. pavilion, next to the west entrance of the convention center, will create a lot of traffic for the booths.

“I think the excellent location and the success of past exhibitors continues to fuel the growth of the pavilion,” Mr. Brown said.

Mr. Brown said he and Robb MacKie, president and c.e.o. of the A.B.A., expect the entire IBIE committee to attend the show and that the lounge will be a hub of activity.

“U.S. manufacturing has always been known for quality, and being in the pavilion helps attendees find world-class U.S. suppliers,” Mr. Brown said. 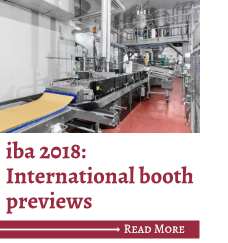 panies first exhibited at iba in the 1990s. In 2006, GHM Gesellschaft für Handwerksmessen mbH took over organizing iba and has since continued to expand the show’s relationship with U.S. companies. Over the years, the number of exhibitors and size of the occupied space have grown continuously. Claudia Weidner, project manager iba, GHM Gesellschaft für Handwerksmessen mbH, said U.S. companies have a key role to play in one of the leading trade shows for the industry.

“Nowhere else is there an opportunity for U.S. companies to get in touch with so many decision-­makers in the industry and to build and deepen international business relationships,” Ms. Weidner said.

Mr. MacKie said more than 30 A.B.A. members will be attending iba to visit the more than 1,270 exhibitors. He said the relationships established at iba ­directly feed into IBIE.

“A lot of the U.S. bakers attend iba to take a look at equipment and have conversations so that when European suppliers come to IBIE the following year, they’re ready to make a purchasing decision,” Mr. MacKie said.

Click here to preview innovations that will be on display at the U.S. pavilion at iba 2018.