We use cookies to provide you with a better experience. By continuing to browse the site you are agreeing to our use of cookies in accordance with our Cookie Policy.
Home » Merchandising for variety packs evolving

Over the years, variety packs have changed a lot in their delivery. Opportunities abound for baking and snack producers to create cost-­effective, user-friendly packaging such as bags with “suitcase” handles.

From an operational perspective, boxes are often preferred because of their ease in automation.

“Placing a product in a carton or box is easier to automate,” said Jim Campbell, north central regional sales manager, Blueprint Automation. “The norm is to have a single carton pass by multiple loading zones for different flavors, so the count is important.”

Cost is also a big factor in considering the type of secondary packaging for variety packs. For example, corrugated cartons, although they stack quite nicely on the retail shelves, come at a higher cost than a bag.

“You would get a flowwrap of a granola bar, and then it would go into another one, where you get three layers — two layers, three long — for six total wraps,” he said. “That’s an inexpensive way to do it.” 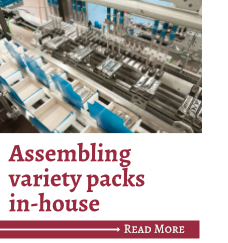 He also suggested that flowwrapped variety packs transport better in shipping because they’re packaged so tightly and take up a smaller footprint than a carton that might leave room for the products to slide around inside of it.

Oftentimes, it comes down to consumer preference and how much people are willing to go with change, and that can all depend on perception.

“People can be resistant to change,” Mr. Kehrli observed. “When they go down the grocery aisle, they buy certain things just because they always have. When they see something in a flowwrap, they have a preconceived notion, regardless whether it’s good or bad.”

Then again, sometimes a bit of testing can go a long way, such as the concept of the variety pack with a built-in handle. Originally developed to reduce materials, the concept actually delivered on a better user experience, said Dennis Gunnell, vice-president, sales and marketing, Formost Fuji. One big preference was that, in the cupboard or pantry, a bagged variety pack got smaller as the products were consumed, as opposed to boxes that stayed the same size. Because of this, the empty box wasn’t left sitting on the shelf at home. Consumers also could carry the bag to their car easier than a box. In fact, one snack producer received the most praise from moms who said the bag was easier to carry from the store to the car with children in tow.

“The big lesson is to ask consumers what they’re looking for,” Mr. Gunnell suggested. “You might be surprised what they tell you.”