Designing a freezer for future demand

Bakers should allocate extra space for adding on to modular tunnel freezers or calculate the extra ceiling height to accommodate longer belts that require more space.

“We often design our spiral blast freezers that have 20 to 25% greater production expansion capacity, so they have room to grow,” said Peter White, president, IJ White Systems.

Bryan Hobbs, sales and service manager, Ashworth Bros., noted a larger freezer allows bakers to transition from a 30-inch to a 40-inch belt without major construction down the line.

“They’ll have the opportunity to grow into it later by simply changing out infeed and outfeed equipment,” he said. “It’s obviously a larger initial investment, but they may be able to amortize it over a longer period.” 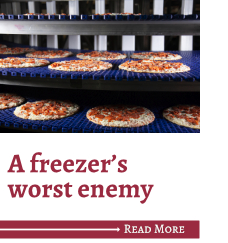 “The drive motors and refrigeration units must also be capable of increases in capacity,” he pointed out. “It is only a minimal cost to implement larger motors and more refrigeration capability on new equipment versus trying to do it once installed.”

Another option involves installing a small cryogenic freezer before the infeed of the spiral system to drop the products’ temperature prior to entering it, suggested Erik Fihlman, program manager, bakery and prepared foods, Linde.

When it comes to a new freezer, keep one thing in mind.

“I never ran into a baker or any other food producer who has complained about excess capacity in the freezer,” Mr. Hobbs said. “It’s always a complaint of not enough capacity.”

Equipment Operations Intralox Freezing and Refrigeration
Subscribe to Our Magazines