JOHNSTOW, COLO. — It’s true that you don’t know what you’ve got until it’s gone. Just talk to Canyon Bakehouse co-founder Christi Skow, whose 2007 celiac disease diagnosis was the catalyst for starting the bakery.

“I was diagnosed with celiac disease in 2007, and at that time, the hardest part for me was cutting out bread,” she said. “You don’t realize what a staple bread is until you’re told you can’t have it anymore.”

Josh Skow, Ms. Skow’s husband and co-founder and chief executive officer of Canyon, added, “It was a great discovery but also a shocking one. It was great she could get healthy again but shocking because eating bread was something we liked to do. What do you do when something’s a major part of your life, and you can’t have it anymore?”

At that time, gluten-free options were mostly relegated to specialty stores and perhaps one shelf of a freezer section.

But in 2008, the Skows reconnected with a friend and veteran master baker who happened to be experimenting with gluten-free bread out of his home kitchen. Mr. Skow, an entrepreneur who had already started three successful businesses, saw an opportunity and jumped on it.

“This was really good bread,” he recalled. “We knew all about the gluten-free lifestyle, and we knew people would buy this bread, so I told him we should start a gluten-free bakery.”

Bread is hard to replicate without gluten, and that’s apparent — often painfully so — to both the producer and end-user. When Canyon Bakehouse began in 2009, the company aimed to not only treat the breadmaking process reverently but also provide consumers with actual bread, not something that felt like a second-rate substitute.

“Gluten-free bread is hard to make,” Mr. Skow said. “I’ve always viewed wheat as God’s gift to mankind for making bread. We’ve been doing that for thousands of years, and now, we are trying to make bread without the key component. But gluten is a protein that celiac and people with gluten intolerance can’t have. Our bakers and scientists have done an unbelievable job working together to make bread that’s just what you would recall.”

In fact, the company’s tagline, “Love bread again,” hints to consumers that Canyon products bring them back to their days of eating a beloved staple.

To produce gluten-free products that are high-quality, clean label and whole grain, Canyon Bakehouse R.&D. looks at a variety of grains and the ways they are processed.

“We also look at different stabilizing systems to help with eating quality, texture and flavor that lead to the overall enjoyment that comes with eating our products,” said Jesse Weilert, vice-president of technical services.

As the company established itself as a viable alternative to its gluten-containing counterparts, more opportunities arose to create more items that gluten-free consumers were going without. In the past few years, Canyon has launched between five and seven new products per year, said Kevin Brouillette, senior vice-president, sales and marketing. The lineup has gone from six to nearly two dozen in just under a decade.

“The concepts for new product development can come from many different avenues,” Mr. Brouillette noted.

In fact, Mr. Skow recalled how Brownie Bites, Canyon’s first foray into sweet goods, made the team. A national customer was visiting Canyon and mentioned that gluten-free brownie bites were the retailer’s No. 1 and No. 2 sellers; the only difference was the package size.

With the Skow family living a gluten-free lifestyle — Ms. Skow and their 15-year-old son Caleb are both diagnosed celiac, but the whole family of five abstains from gluten — the company has a personal understanding of its consumers’ needs. Because of this, Canyon has established a following that’s fiercely loyal to the brand.

“People are really passionate about our bread,” Ms. Skow noted. “They go from not being able to have bread and other items they were used to eating to having sandwiches again, and they’re very excited about that.”

The company sees people experiencing the same journey the Skow family did, and it drives a personal investment in the products and brand.

“Our family eats a gluten-free diet, and living that lifestyle has a significant impact on our product development and quality,” Mr. Skow said. “We want to make products that we enjoy and that taste good and are healthy, so we heavily weigh in on that.”

Understanding the family aspect of the consumer base is important for Canyon because, as Ms. Skow can attest, when one or two family members have a gluten-free diet, the whole family is on board.

“This means we naturally have more consumers and people who try our bread — and continue to eat it — just because they like it,” she said. “And that’s really important to us.”

“I tell people the sky is the limit; the list is long on what I’d love to have,” she said.

Future product development likely will focus on meal occasions such as breakfast and snacking, and the bakery is looking at more sweet goods items as well. 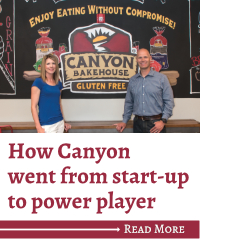 al investment led to the creation of better-tasting gluten-free foods, the company also sets high standards for quality and safety.

Products are certified gluten-free by the Gluten Free Certification Organization, which requires lot testing of each product down to 10 parts per million (p.p.m.) to qualify. But that’s still not enough for Canyon, which targets below 5 p.p.m. and strives for a “zero-gluten” standard.

It doesn’t stop there. The bakery also does not use any of the big eight allergens except eggs. The facility is free from wheat/gluten, dairy, peanuts, tree nuts, soy, fish, and shellfish, so its products are safe for a variety of allergen-conscious consumers, as well as those abstaining from gluten.

To ensure these standards, the bakery relies on an extensive qualification process and strong partnerships with their suppliers, as well as internal and third-party testing of ingredients.

Canyon Bakehouse also prides itself on its food safety standards; the bakery has been SQF Level II-certified since 2015.

“That’s a big deal because it’s all-encompassing,” Mr. Skow said. “It includes food safety and now food security because FSMA requires that we take responsibility for our food security as well.”

The bakery is also certified Kosher Pareve, and packaging has the Whole Grains Council stamp to indicate products contain 8 grams or more whole grains per serving.