Language barriers, personal hygiene and environmental impacts are just a few factors hindering food manufacturers’ compliance with the Food and Drug Administration’s (F.D.A.) Foreign Supplier Verification Program (F.S.V.P.) under the Food Safety Modernization Act (FSMA). Enacted to verify that food imports meet the same safety standards as U.S. food production, the regulation requires importers to monitor their foreign suppliers. Sometimes this can be difficult due to cultural differences or how easily suppliers cooperate.

Russell Statman, executive director of F.D.A. compliance consultant company Registrar Corp., noted that cocoa suppliers in particular have had a lot of problems.

“With the child labor issue, you run up against cultural issues where it’s very difficult to tell a farmer in Africa that their kid can’t work on the family farm,” he said. “They may look at it as us telling them what to do.”

Cultural caveats could also serve as pathways for companies to classify suppliers as a high or low risk or how often they check on the suppliers’ compliance with FSVP. Take Guatemala, for instance. 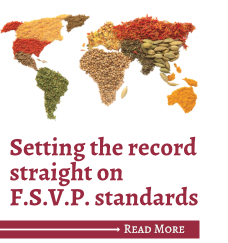 “Guatemala happens to be one of the poorest countries on the planet, so you can’t expect their government to have a good food safety program,” said Len Heflich, president, Innovation for Success and Baking & Snack contributing editor. “If I have suppliers in Guatemala and in West Germany and
do my risk assessment, I’m probably going to say that the one in Guatemala is the one that is a higher risk than the one in Germany, so I’m going to focus on it more.”

The F.D.A. ruled that four countries — Canada, New Zealand, Australia and the Netherlands — have a food safety program equivalent to the F.D.A., which means they are exempt from most of the F.S.V.P. requirements and will have an easier time with imports. However, that doesn’t mean those F.S.V.P. importers don’t have to ensure compliance, Mr. Heflich said. These countries are simply low-risk.

“We have bad companies in the U.S., so just the fact that we have F.D.A. here doesn’t guarantee a manufacturer’s food safety,” he said

Some companies will look at a supplier and decide it’s not worth the time or money to verify and maintain compliance. On the flip side, some suppliers will say they don’t want to change their food safety procedures for the sake of another country’s regulations. With the F.S.V.P. rule, these decisions strongly affect the supply chain.

F.S.V.P. makes FSMA an even greater gamechanger. Statistics state that the United States imports more food than any other country on Earth. According to the U.S.D.A., more than 190 countries export food products to the United States, which means F.S.V.P. affects all of them.

“This is not a national law,” said Cornelius Hugo, food safety professional, AIB International, about the latest rule. “Once that sinks in, you see the magnitude of FSMA. What we call Food Safety Modernization Act is really a worldwide law.”