We use cookies to provide you with a better experience. By continuing to browse the site you are agreeing to our use of cookies in accordance with our Cookie Policy.
Skip To Content
Home » A.B.A. to serve as U.S. liaison at iba 2018

WASHINGTON — For Robb MacKie, president and chief executive officer of the American Bakers Association, the global landscape for the baking industry spans beyond consumer trends to as far as the eye can see. At iba, being held Sept. 15-20 in Munich, Germany, dozens of A.B.A.'s member company representatives will serve as “ambassadors” for the International Baking Industry Exposition (IBIE) and the U.S. baking industry as well.

“Who better to tell a story of why they are going to the baking trade show than bakers themselves?” Mr. MacKie said. “A lot of bakers go to iba to look at equipment from U.S. and European suppliers, and that gives them an opportunity to have conversations, particularly with European suppliers, who are coming to IBIE the following year when these bakers are ready to make a decision and a purchase.”

In addition to meeting with exhibitors, A.B.A. plans to hold high-level, top-to-top meetings with its board members and their European peers.

“We’re talking about common issues, supply chain challenges and consumer trends with our various counterparts,” Mr. MacKie said. “There are areas like sustainability, packaging and robotics where Europeans may be ahead of the trends and areas where the U.S. may be ahead, so this joint learning can be enormously valuable. We would invite those whom we met with to do a follow-up at IBIE next year.”

Adapting to the changing consumer sentiment about grain-based foods varies across the globe. With the rise in out-of-home food consumption, households are making fewer sandwiches, which has made it challenging for companies to expand the packaged bread market.

“Constantly shifting consumer tastes and perspectives around our products is a mega trend that is affecting all bakers — in some regions of the world more than others,” Mr. MacKie said. 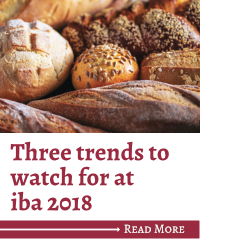 Other trends start small, then travel beyond their local borders. Take labeling. Chile, for instance, is targeting an obesity epidemic that, like in America, affects more than half of the population. The nation’s tough labeling initiative prevents marketing to children under 14 and includes front-of-packaging “stop signs” that caution consumers about products that are high in sugar, saturated fat or calories.

Maria Carolina Gollo, innovation/global marketing for Grupo Bimbo, noted the initiative prompted the company to reformulate products to protect most of its brands by reducing the number of stop-sign labels. And it may have to do it again as even stricter regulations go into effect in 2019 in Chile.

“Why is this such a big deal? Because it is affecting our industry´s sales,” she said. “Products with no stamps are growing four times faster than those with stamps.”

In Europe and the U.S., bakers face a fluid labeling environment that could cost millions in packaging costs over the next few years. Mr. MacKie called it part of a trail of disruption affecting the industry.