We use cookies to provide you with a better experience. By continuing to browse the site you are agreeing to our use of cookies in accordance with our Cookie Policy.
Skip To Content
Home » Canyon Bakehouse turns to automation for new line

JOHNSTOWN, COLO. — Processing gluten-free dough is tricky under any circumstance, but it requires some extra finesse at Canyon Bakehouse.

Although Josh Skow, co-founder and chief executive officer of Canyon, is an innovator — perhaps even a game changer in this industry of tradition — this entrepreneur also has the heart of a baker and stays true to the company’s gluten-free formulas, which were born in northern Colorado at 5,000 feet above sea level, using Big Thompson water from the Rocky Mountain National Park.

The new line is the bakery’s first venture into full automation, and it was imperative the new equipment stay true to the original process.

“We were staunch in that we did not want to adapt our formulas or product to the new equipment,” Mr. Skow said. “We were looking to expand capacity, so in many cases, we didn’t want to change what we were doing but just do more of it. So, we needed the equipment to adapt to — and work for — our formulas and processes.”

And while Mr. Skow doesn’t shy away from challenges or innovation, he’s not fully an early adapter when it comes to a new automated line. Risks must be calculated. For example, a key consideration for this project was proven solutions. Although the line at Johnstown has its share of custom equipment, Canyon takes a cautious approach to early innovation.

“We weren’t interested in anything that was ‘model one,’” Mr. Skow insisted. “We were looking for suppliers that had experience with gluten-free. There are certain aspects of gluten-free baking that are similar to traditional, but there are also aspects that are unique to gluten-free. Those can pose different types of problems and needed solutions, so suppliers with that kind of experience were valuable to us.”

That’s not to say the bakery isn’t open to new ideas for growth … something this facility has plenty of space for.

“There’s a lot of opportunity for equipment suppliers to say, ‘We have a great innovation for you,’” he said. “We want to look at that, especially on customized solutions, but it just takes time.”

Gluten-free baking is an inherently tricky proposition, and it gets even more complicated when scaling up. The new bakery allowed Canyon to streamline production in a space that provided room for straight-line automation of its sliced pan bread. Additionally, bagels and other specialty items are produced on the semi-automated line that Canyon moved over from the old location,

On the new line, bulk ingredients, including rice flour, sorghum and tapioca, are stored in 2,000-lb supersacks, as well as bulk liquids including oil and sugar, in a Contemar handling system. Flour is transported via a blower into mixers, and minors are scaled and added by hand.

Gluten-free dough often requires less, and gentler, mixing and makeup. For this, Canyon stays true to the original process. Getting gluten-free production just right requires a wealth of trial and error, and once a baker gets the process down, it’s hard to deviate.

After the proprietary mixing and makeup process, panned dough travels six loaves per strap on stainless-steel grids into an AMF proof box for a rest time that varies by product. Once out of the proofer, loaves such as the top-selling 7-Grain run through a Burford Corp. high-speed duster before heading into the AMF continuous oven.

The bakery has come a long way from one Revent rack oven when it started. However, that oven is still in use — along with eight more — on the semi-automated bagel line.

“Baking with a lot of ovens is flexible, and there are many positives to that, but putting everything through one oven is also nice because you just have one machine to keep track of and adjust,” Mr. Skow explained.

Since gluten-free bread can vary by product, even in the same operation, the oven was designed with a Flame Factor program to allow for adjustments.

Once baked, the loaves run through a Capway depanner, which sends the pans back for cooling and cleaning, and the bread goes from a single row into two as the loaves head through the AMF spiral cooling system before slicing.

“These are high-quality baggers,” Mr. Skow said. “They’re one of the gold standards, as far as we’re concerned.”

Mr. Skow recalled that both Bettendorf-Stanford and Formost Fuji provided exceptional service on a short turnaround when part of the start-up plan took an unexpected turn.

Before bagging, some bread takes a turn to receive modified atmosphere packaging (MAP) before heading to the third Formost Fuji GTS-4. Newer products, such as the Country White, Ancient Grain and Honey Oat, are packaged in the Stay Fresh MAP packaging. These products’ texture and consistency are different from the staples, and the extended shelf life that Stay Fresh provides allows them to be more easily merchandised on center-store shelves.

Aside from the Stay Fresh, after bagging most Canyon products are frozen immediately on an AMF double-spiral in an FPS freezer box.

“Until October 2017, we were a frozen-food company,” Mr. Skow said. “We froze everything. It locks in freshness and allows you to build inventory to transport all over the country.”

After the frozen loaves are case loaded, the boxes are then palletized and loaded onto a shuttle truck that transports them across the street to a facility that houses 35,000 square feet of ­frozen storage.

Depending on the amount of stock, the bakery usually keeps a few weeks of inventory on hand. When things get busy, product doesn’t stay across the street for more than a few days or possibly a week before it ships out.

“The beauty of a frozen business — and the Stay Fresh, too — as opposed to a fresh (direct-store delivery) system is that while they’re making product daily to go out the next day, we can build stock,” Mr. Skow said. “That means ultimately we could shut down on weekends. We can control our inventory and take holidays off. I love being a baker of frozen or Stay Fresh packaging; I’m not working split shifts.”

By investing a bit in inventory, the bakery essentially buys time.

“We pull inventory, and we can kind of flex in and out,” Mr. Skow said. “We can still somewhat produce to order, but in conjunction with our inventories.”

Planning for the future

The brownfield facility provided more space than the company had originally planned for, but it also came equipped with growth capabilities. 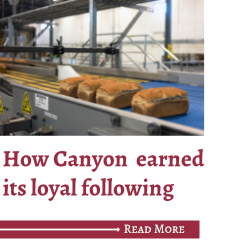 “We can see needing the extra space and using it for years to come,” Mr. Skow said.

Growth opportunities include adding a third line and fully automating the bagel line, which has an IJ White spiral cooling tower and Stay Fresh packaging, to accommodate additional niche.

“Another capital expansion would be to install an inline freezer on that line,” Mr. Skow said. “Then the case packing can happen inline, and it can be palletized here. Then only pallets would leave here and go to storage.”

Unless, of course, the company expands the building to bring frozen storage over from across the street.

“People often ask us how we have accomplished all this,” he said. “I can tell you that we are thankful; we thank the Lord for our success, but we didn’t start out this way. We started with one oven, and we grew quickly. The key to our success has been managing our growth and managing a fast-growing business. You’re constantly learning, prioritizing and understanding where you can give. How do you eat an elephant? One bite at a time.”

Canyon Bakehouse has come a long way in a relatively short time, but the company has no disillusions about its purpose. This was never about capitalizing on a hot trend; it was — and will always be — about giving bread back to people who had to give it up, whether by their own choice or the doctor’s.

“Everything we do is about providing solutions for people who are trying to take gluten out of their diet,” said Kevin Brouillette, senior vice-president, sales and marketing. “The love of bread is very important to us. People give it up for a reason, and whatever that reason, they’re taking something out of their diet, and that’s a big deal. Being able to love bread again is an emotional thing.”

Canyon prides itself on the relationship with its consumers through outlets like social media and even grassroots efforts such as consumer testimonials at trade shows and public events. With a signature entrepreneurial spirit, this bakery won’t stop until it’s on every supermarket shelf in America. And the bonus? It’s in pantries of people who also have the choice to eat gluten.

“As far as I’m concerned, our key demographic is anyone who eats bread,” Mr. Skow said. “Some people say gluten-free is like bread but isn’t bread. But that’s not true for us. Our bread is bread.”