We use cookies to provide you with a better experience. By continuing to browse the site you are agreeing to our use of cookies in accordance with our Cookie Policy.
Home » Enzymatic interesterification gives bakers a new way to go pho-free

Bakers have been trying to remove partially hydrogenated oils (phos) long before the Food and Drug Administration (F.D.A.) decided these fats were no longer safe for human consumption.

While many options are available to formulators, enzymatic interesterification offers some exciting opportunities in pho-free shortenings.

“Enzymatically interesterified shortening was really not fully perfected when the trans-fat labeling was enacted and was just being improved when F.D.A. took their action against phos in 2014-15, so it’s fairly new,” said Richard Galloway, oils expert, Qualisoy. “It’s very exacting now.”

This process rearranges the fatty acids of triglycerides to change the fat’s attributes, such as melting point and crystallization. By blending two oils, introducing an enzyme and then heating and cooling the blend, formulators can create a shortening with similar functionality to phos, namely a wider range of stability, without any trans fat. 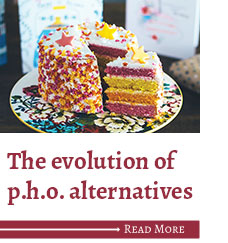 High-oleic soybean oil and fully hydrogenated soybean oil can be blended together and interesterified with the use of enzymes, noted Tom Tiffany, senior technical sales manager, ADM Oils. This creates a soy-based shortening that is non-pho but delivers the melting and oxidative characteristics necessary to serve a wider range of bakery applications.

“With this development, some of the functionality lost by moving away from phos is regained, thus paving the way for the next generation of soybean oil based non-pho solutions,” he said.

Stratas Foods’ Flex processing approach creates a wide range of functionality. The company has applied it to several shortenings and margarines in its portfolio, including those based in palm, interesterified soy and interesterified high-oleic soy.

The plasticity and texture of interesterified high-oleic soybean shortening can be beneficial for bakery applications that have found the jump to non-pho shortenings challenging, specifically, puff pastries and buttercream icing, said Mr. Galloway.

“Applications like puff pastries need those layers to be smooth, not bumpy and rough, and interesterified high-oleic soybean shortening gives really good layering in puff pastry products,” he said. “Buttercream icing and other products that need a smooth consistency, yet pliable workability, can also benefit.”