There are two types of power outages that can occur at a baking facility, and each are very different in outlook and impact. The most common, and probably most irritating, is known as a part-cycle interruption.

“This is usually noticed as the lights blinking off, then back on,” said Scott Hughes, engineer, InLine Engineers. “It’s often accompanied by moans, groans and rapid movement from engineers and maintenance personnel.”

These aren’t prolonged losses of power. Power companies are often switching power supplies to accommodate issues such as trees falling on power lines.

The second type is a true power outage that can last hours. A power outage management plan can come into play as all equipment will be down without back-up generators or power supplies.

It’s important that a bakery has a restart plan in case of an outage. That will ensure every employee knows his or her role in implementing the strategies necessary to optimize any back-up power available.

The highest priority of any plan is employee safety. This includes installing proper safety systems, such as emergency lights, and training facility personnel to react appropriately during a power outage.

“Such systems and protocols must remain in effect even if power is lost,” said said Tim Gause, electrical design engineer, AMK Design Group. 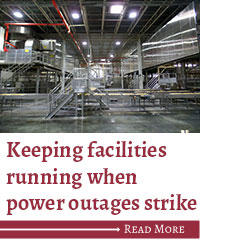 “Executing a restart plan effectively can minimize losses in mixing, dough preparation and post-bake operations,” he said. “If a short-duration outage is seen, ovens can be restarted and back up to operating temperature in a relatively short amount of time.”

The outage management plan will determine each employee’s role in getting the bakery started again. Assigning priorities and expertise to each area is important, said Craig Zavilla, technical services manager, Pepperidge Farm.

“Have a list, and designate mechanics to different areas,” he noted.

As a part of this plan, each production line needs its own protocol. Employees need to know what products are on the line and the restart procedures for each piece of equipment.

One of the most critical parts of a bakery, the oven, should have its own plan for restart, and it should be the first piece of production equipment brought back online as it can take the longest in the event of a total shut down.

“It could be 45 minutes to get that oven system up and running,” Mr. Zavilla said.

Then he suggested prioritizing emptying the downstream side of production so upstream product has a place to go once everything is running again.

For the uninterrupted power sources system, it’s important to know how it will be used and for how long. These systems can power the oven, control systems and other equipment but have a limited usage time, so it’s important that everyone is clear on that information.

When considering the potential loss of power, bakers need to know what their production needs are in terms of starting back up.

“From there, systems and protocols can be put in place to meet their needs and wants during a loss of power,” Mr. Gause said.

These protocols and systems can not only keep product intact but also keep employees safe and get everything moving again.