A brief history of fortification

About 31% of the world’s industrially milled wheat flour is fortified, according to the Food Fortification Initiative, a global group that helps country leaders promote, plan, implement and monitor fortification of industrially milled flour, maize flour and rice. The nutrients most often included are iron, zinc and the following B vitamins: folic acid, niacin, riboflavin, thiamin, vitamin B12 and vitamin B6. These vitamins and minerals have been shown to support life-long health. Several prevent anemia, and folic acid reduces the risk of birth defects of the brain and spine.

“One advantage of fortification is that consumers increase their nutrition without having to change their eating, shopping or cooking habits,” said Sarah Zimmerman, communications coordinator for the Food Fortification Initiative.

Folic acid fortification of flour and cereal, which began in 1998, was linked with a 19% decrease in neural tube birth defects between 1995 and 1999, according to the American Medical Association.

Julie Jones, a member of the Foods and Nutrition and Advisory Board for the Grain Foods Foundation (G.F.F.), explained that fortification programs were designed to address overt deficiencies. Data show that enrichment and fortification mean less than 12% of the U.S. population falls below the estimated average requirement (EAR) for thiamin, riboflavin, folate, iron and vitamin B6. For thiamin, 49% meet the EAR without fortificants, but 96% with them; for folate 12% without, and 89% with them.

“Sadly, a recent study showed that the avoidance of folate-fortified grains in women in the year prior to conception (as part of low-carbohydrate or grain-free diets) was associated with a 30% increased risk of spina bifida and anencephaly in the infants,” Ms. Jones said. “Similar problems could be seen with gluten-free diets as many gluten-free foods are nutrient-poor.”

Vitamin deficiency remains prevalent around the world, especially among low-income families. Stunted growth, heart disease and blindness are some of the health concerns attributed to micronutrient deficiencies. 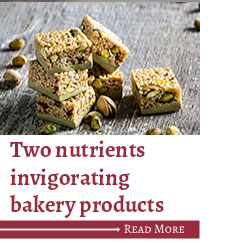 “Flour is a staple that’s widely consumed by a large population base, and fortifying it is considered to be a simple, cost-effective measure to minimize deficiencies,” said Andreas Blüthner, Ph.D., director of food fortification and partnerships for the German chemical company BASF SE.

Fortification of foods and ingredients can prevent deficiency diseases, improve nutritional status and promote the overall health of the population. However, gaps in achieving nutritional adequacy remain. Potassium, fiber and calcium currently are among the nutrients of concern.

Under U.S. regulations, organic grain products are often not enriched or fortified because the ingredients are viewed as additives, according to the Grain Foods Foundation (G.F.F.).

“Given recent reports from the Dietary Guidelines Advisory Committee, now may be the moment to re-examine the enrichment mixture and see if it needs changing for today’s needs,” Ms. Jones said.

For example, she listed the addition of vitamins E and B6, which are not currently in standard enrichment, and vitamin D.

Ms. Jones said that to achieve these fortification goals, the industry’s efforts must be guided and supported by regulatory agencies. Continued nutritional fortification of bakery products will not only prevent micronutrient malnutrition but also improve the health and wellness of consumers.