MUNICH — The digital access afforded to consumers brings the world to their front door, literally and figuratively. And that means global influences are infiltrating bakery product trends and development.

Product mash-ups are crossing international regions as well as product makeup (hello, Cronut). At iba, held Sept. 15-20 in Munich, bakers took note of international trends for inspiration as well as camaraderie when taking note that many consumers have similar concerns regardless of what corner of the world they call home.

“We’re seeing more and more that baking industries and trends are getting global,” said Johan Sanders, vice-president, global R.&D., Dawn Foods, Jackson, Mich., and president of FEDIMA, the European baking industry’s trade union. “I wouldn’t have believed that 10 years ago, but it’s happening, especially as more companies consolidate. And as (national) laws get closer to one another, we as a group have a moment to interact and see how we can learn from each other.”

At iba, Mr. Sanders met with Robb MacKie, president, American Bakers Association (A.B.A.). During that meeting, Mr. MacKie and Mr. Sanders uncovered several commonalities and discovered new opportunities for international collaboration. This is not new to A.B.A., which regularly meets with the Bakery Association of Canada to discuss interconnected issues and trends that often come to North America from Europe.

On the regulatory side, FEDIMA and A.B.A. confront regulations that may not be scientifically based.

“This area is a journey for us,” Mr. Sanders said. “We can look at what the U.S. has done and learn what worked and what’s been implemented.”

He noted that in Europe, identifying a threshold for clean label is a current issue.

“How do you deal with that? What’s considered scientific? In Europe, you’ll see that different countries have different perspectives,” he said.

After all, clean label ingredients can still have technical sounding names, a challenge for baking companies around the world.

Mr. Sanders also questioned whether measurability will lower the threshold for regulation.

“How can we measure scientifically and also agree?” he suggested. “This is an opportunity to collaborate.”

He also noted specific consumer trends that currently mirror those happening in North America, specifically in the U.S., including gluten-free, veganism and social responsibility. Mr. Sanders observed that the American version of social responsibility tends to be more people-oriented, while the trend focuses on ingredients in Europe.

Stateside, A.B.A. currently is partnering with associations such as the Food Marketing Institute and the National Grocers Association to open lines of communication with retailers and educate them so they can better educate consumers.

“It’s important to not focus solely on the ‘here and now’ of these issues and realize the broader challenges and opportunities,” Mr. MacKie said.

Mr. Sanders has an opportunity to apply European and other global trends in U.S. markets — and vice-versa — through his role with Dawn Foods. For example, Dawn has successfully implemented Halloween product promotions for artisan bakers in European markets such as The Netherlands, where Halloween has been an untapped opportunity. 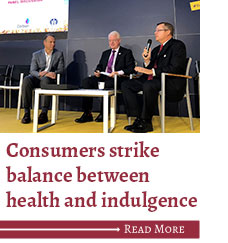 “There is a lot of American heritage we can bring from Dawn,” Mr. Sanders said. “We’re also launching high-ratio layer cakes in Europe, where it’s an unknown segment. With our European reach, we want to show our leadership in the industry, and we can bring awareness to a market that doesn’t yet exist.”

Conversely, he observed that European trends are showing up in U.S. retail markets such as New York. Also, Hispanic trends are crossing from Mexico into the United States and vice-versa.

“Hispanic markets and panaderias make up about 25% of all bakeries in the U.S., so for us, it’s important to understand what they’re offering,” said Jennifer LaPaugh, senior director, global market research, Dawn Foods. “You can see an American influence in a lot of the Hispanic shops; they’re bringing in items that are a little more ‘American.’ And then you see some items from those same shops making their way into the mainstream during some of the bigger holidays.”

Product crossover is a key consideration for bakers when visiting with equipment suppliers and other tradeshow exhibitors as well.

“The initial thought at these international shows is often that they’re dominated by bread,” said Bill Quigg, president, More Than A Bakery, Versailles, Ky., and Richmond Baking, Richmond, Ind. “But from my perspective, the world of baked goods looks more like a system. Anything we can learn from different products helps us.”

For example, Mr. Quigg suggested that he would spend time at a booth with a manufacturer of croissant sheeting lines, despite the fact that his facilities do not make that product.

“We do make sheeted products, there are applications across industries, so I find myself interested in finding out what their advances are,” he said.

From a product development perspective, cross-pollination of trends can be seen among bakeries of all sizes. In fact, Joe Turano, president and chief executive officer, Turano Baking Co., Berwyn, Ill., and 2019 IBIE chairman, observed there’s a marriage happening between commercial and craft baking. There’s a renaissance in artisan baking and a surge in automation. And, based on attendance and exhibitors at international shows such as iba and IBIE, there’s a market for it all.

“There’s no question that bakery companies — whether small, medium or industrial — around North America and the globe will always be present,” Mr. Turano said. “There will always be a market need for the craft baker, the medium-size wholesaler and the industrial bakery. The more we can adapt IBIE to ring in and engage each of these diverse segments, the more relevant we will stay.”