We use cookies to provide you with a better experience. By continuing to browse the site you are agreeing to our use of cookies in accordance with our Cookie Policy.
Home » Hiring for culture brings challenges and opportunities for baking companies

Hiring for culture brings challenges and opportunities for baking companies

“Culture” is a ubiquitous term these days. Whether referring to social norms that vary from region to region or the specific areas on which a company places its values, culture is an important part of everyday American life, and it’s a vital aspect of successful businesses.

For some baking companies, culture is a primary variable; when recruiting hourly operational employees, they may often see bakery skills as preferred, but not required. This practice can be beneficial, as long as the company understands the challenges and benefits that come with this style of hiring practice.

“I’m certainly hiring some people from the [baking] industry, especially in skilled positions like maintenance,” said Felicia Quigg, vice-president, Family Pride, More Than a Bakery, Versailles, Ky. “We have people coming from the automotive industry, but for the lion’s share of our ‘family member’ base, if they have a food background, it was in a restaurant.”

Ms. Quigg explained that More Than A Bakery often receives applications from people who have worked in healthcare and customer service. “We typically attract people who care about other people,” she said.

Overall, corporate culture requires buy in from the top down. While management can’t necessarily force a culture upon its employees, the climate can’t change without buy-in from leadership. “Unless it’s endorsed, supported and backed from the top of an organization, changing a culture is nearly impossible,” said Tim Cook, president and CEO, Shick Esteve. “Culture has to come from the top, even if the ideas didn’t originate there. I truly believe you cannot transform a culture unless you have the buy-in all the way up to the company ownership,” he added.

Mr. Cook recently spoke on a CEO panel at the American Bakers Association’s NextGen Baker Leadership Forum at the George Washington Leadership Institute. Among topics such as training, collaboration and data mining as a management tool.

At More Than A Bakery, Ms. Quigg and her husband, Bill, may have identified what they want the culture to be, but they rely on the bakery’s workforce to bring it to fruition. “Bill and I cannot infuse the culture that we want to have in our facility,” Ms. Quigg said. “It has to happen organically.”

Ms. Quigg emphasized that simply telling people to do the right thing or to be kind isn’t sufficient. “When someone comes to our bakery because they’re thirsty to be part of our growth, that’s one side of it,” Ms. Quigg said. “And on the other side, you can tell if someone comes here to be taken care of. You can even tell by the words they choose.” 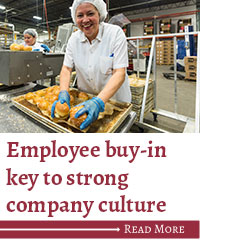 Many bakeries are thinking outside the box and looking beyond the industry to fill the workforce. It’s akin to fishing in a new pond, but it takes more than that. To find new qualified employees, it’s important to change the rod and reel, as well. “Our bait is our reputation,” Ms. Quigg said.

During the panel discussion, Mr. Quigg reflected on the company’s goals as it started its new production facility in Versailles. Mr. Quigg saw More Than A Bakery, a subsidiary of Richmond Baking in Richmond, Ind., as an opportunity for cultural reset from the almost 100-year history in Richmond. “We have this great foundation things we’ve done well for over a century, but we felt like our culture could use a refresh,” he recalled.

“Not only physically did we try very hard to have the facility reflect the culture we wanted, but it also comes down to what do we do every single day,” he said.

Mr. Cook agreed with the value of considering culture in the hiring process. “There are things that are critically important that we don’t talk enough about, and one is hiring for culture,” he said. “That’s a big part of what we do.”