We use cookies to provide you with a better experience. By continuing to browse the site you are agreeing to our use of cookies in accordance with our Cookie Policy.
Skip To Content
Home » Finding skilled bakery employees goes from challenge to crisis

Bakers are having a hard time finding enough workers to keep their operations running optimally. But sometimes there just aren’t enough fish in the sea.

The current U.S. economy is humming along, and the national workforce is shrinking. The unemployment rate reached 3.9% in August, according to the U.S. Labor Department, the lowest it has been since 2000. The combination of tax cuts and government spending increases is adding fuel to an already hot economy. The Federal Reserve forecasts stronger growth to close out 2018 with the unemployment rate potentially dipping to 3.6% and to 3.5% in 2019 and 2020. Those levels haven’t been seen since 1968. It’s great news for the economy, but it presents some challenges for manufacturing.

When hiring is strong, more people can quit their jobs for new, usually better, jobs. This creates stiff competition among industries to find and keep employees, including baking and snack manufacturing.

“The competition in manufacturing — frankly, everywhere now — for skilled associates and employees is higher than it’s ever been,” said Robb MacKie, president and chief executive officer of the American Bakers Association. 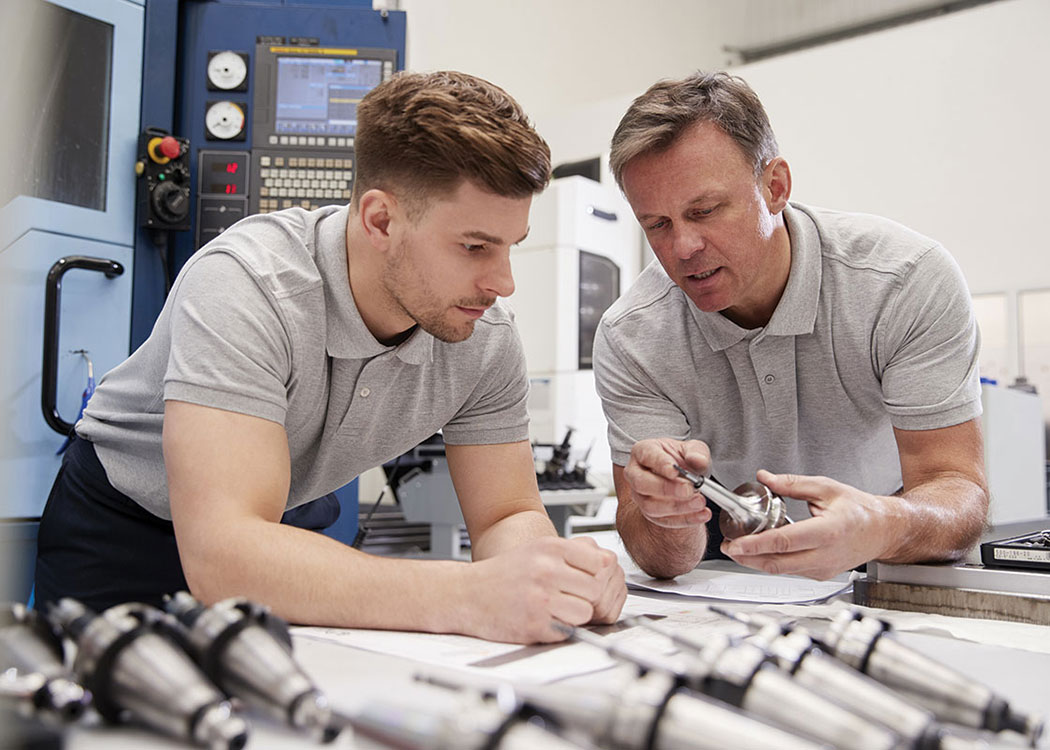 In 2016, the A.B.A. and the American Society of Baking commissioned a report, “The Workforce Gap in U.S. Commercial Baking: Trends, Challenges and Solutions,” conducted by Cypress Associates, to investigate the widening workforce gap. The findings were dramatic. Forty per cent of baker respondents in the study said there was a shortage of machine operators, and 59% cited a shortage of salaried engineering/maintenance employees. It also identified how the workforce is changing as baby boomers retire and younger generations take their place. Since the study was completed, these issues have not been resolved.

“We’re working toward solutions, but I would say that we went from a challenge to almost crisis-mode,” Mr. MacKie said. “I would say in certain parts of the country, it is in crisis.”

A recent Deloitte report, “The Skills Gap in U.S. Manufacturing,” predicted that by the year 2025, nearly 3.5 million manufacturing jobs likely will be available, and the skills gap is expected to result in 2 million of those jobs going unfilled.

There are two major contributing factors to the widening gap, according to the report: baby boomer retirements and economic expansion. An estimated 2.7 million jobs are likely to be needed because of retirements, while 700,000 jobs are likely to be created due to natural business growth. Other factors, including loss of embedded knowledge due to movement of experienced workers, a negative image of manufacturing among young people, lack of STEM skills among workers and a gradual decline of technical education programs in public high schools, contribute to the shortage of skilled workers.

Kansas State University is one of several universities on the forefront of recruiting and training the next generation of bakers and industry leaders. K.S.U. offers degrees in baking, feed or milling science and management and holds a 100% job placement rate with students typically receiving multiple job offers upon graduation. Made up of three undergraduate programs — Bakery Science & Management, Feed Science & Management, and Milling Science & Management — plus a graduate program in Grain Science, the university’s curriculum prepares students for the workforce.

Gordon Smith, Ph.D., head of the Grain Science department, said despite its positive reputation, the program still faces some challenges. One of those is trying to get more students into the programs. Despite increasing demand for qualified students, departmental enrollment has not substantially grown for about seven years, and Dr. Smith said the program could place twice as many students in jobs upon graduation easily. The supply isn’t meeting the demand.

Another challenge is getting companies to adjust the recruiting message to a new generation of workers with some different values. According to a 2016 Deloitte study, “Winning Over the Next Generation of Leaders,” 66% of millennials expect to leave their current employers by 2020 due to a lack of leadership development. The study also found that millennials express little loyalty to employers if they feel underutilized and believe they aren’t being developed as leaders.

That said, Dr. Smith said he sees the same values in younger students that he did in his own generation, and he cautioned bakers to not stereotype young potential employees.

The challenge is finding new ways to connect with the interests of younger generations.

The baking and snack industries may have an image problem. Many young workers gravitate toward attractive tech jobs in automotive or engineering industries. But changes in bakery automation and mechanical designs deliver the opportunity to draw new eyes.

According to Forbes’ “How Industry 4.0 Helps Manufacturers Solve Workforce Challenges” report, manufacturers who highlight how high-tech, automated and software-driven their industry is have a better chance of luring potential recruits.

“Updating your factory tooling, automation and software with the latest Industry 4.0 technologies will help attract the young talent that has grown up with digital technologies and are extremely computer savvy,” the report stated. 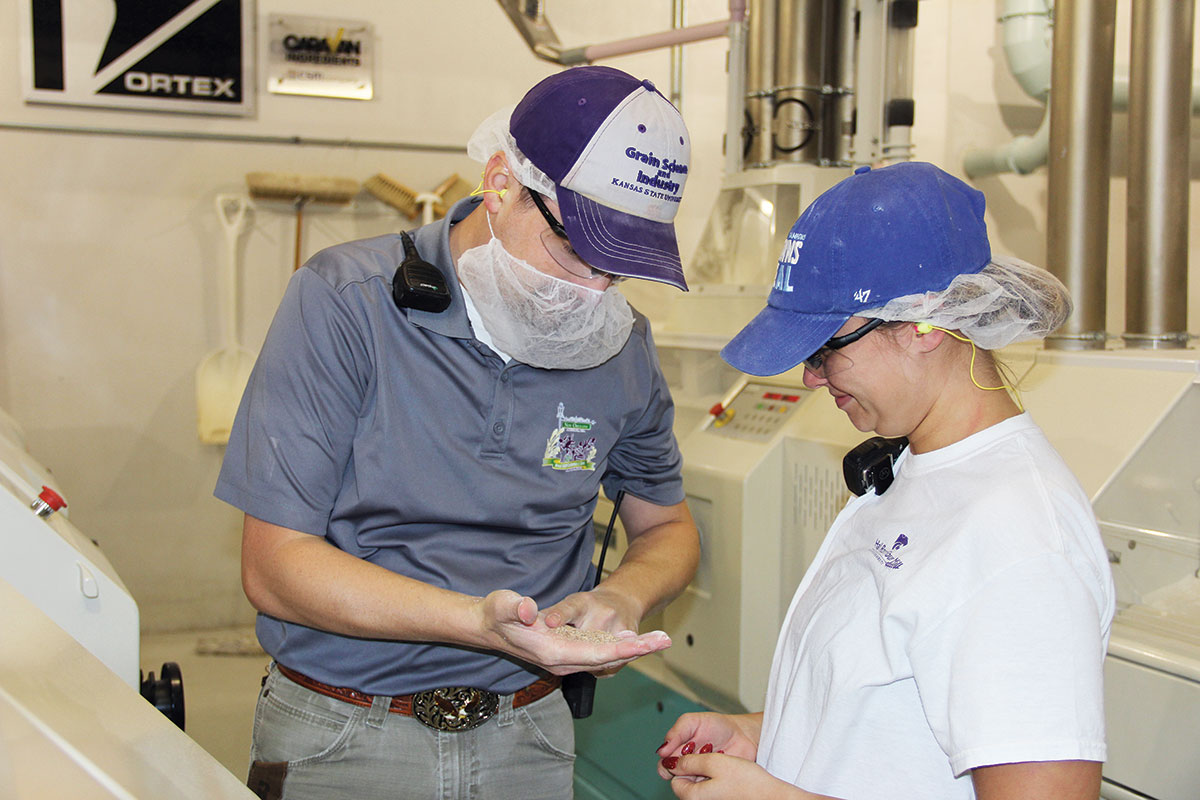 The industry has become more technical in nature. Bakeries rely more on robotics and automation, and with that the need for people with more computer and engineering skills grows. To get their attention, peer pressure often works best.

“The most effective recruiting of high-caliber, high-talent people into the industry is, by far, done by peers,” Dr. Smith said. “Somebody a student can look at and say, ‘That’s me.’”

Engaging future employees starts before they ever apply for jobs. In many cases, it begins before they even get to college. The industry is looking at better ways to recruit new students into grain sciences to fill the pipeline of incoming workers.

“We’ve gone back, and we’ve doubled our efforts in high schools in Kansas and surrounding states to make sure those students are aware of what these careers look like,” Dr. Smith said.

There has been a shift to using graduates who have been in the industry for three or four years to recruit new students and future talent. The Grain Science department encourages its graduates and students to be ambassadors for the industry, sharing their studies and opportunities with friends and family.

One of the key elements to educating potential new students on industry career potential is the opportunity for them to put their learning into practice. 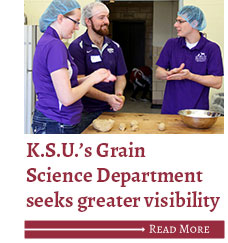 “We believe that immersive learning is critical to not only potential employees or to continuous education but also to our students,” Dr. Smith said.

By the time they graduate from the grain science department at K.S.U., most students have had at least two, sometimes three, internships. They’re going out in the industry, whether with a baker or a supplier, and they’re getting hands-on experience with the latest technologies and manufacturing practices. This is a critical step to changing the image of the industry because they see it first-hand.

“The work that K.S.U. is doing is enormously important to meet the needs of the industry,” Mr. MacKie said. “Our challenge is to help the program get the needed resources, like scholarship dollars, so that we can increase that pipeline coming into the industry.”

With so much competition for skilled workers, baking and snack companies should also invest in the talent they already have. Industry associations like the A.B.A., the A.S.B., AIB International and BEMA provide several ways to do that.

“All our collective work is going to help close that skills gap and make sure we’re producing the talent and the skills needed for all bakers throughout the industry,” said Mike Goscinski, director of government relations, A.B.A., and liaison of A.B.A.’s Human Resources and Safety Committee.

The association’s Leadership Development for Front Line Professionals program works with plant managers and other leadership positions to enhance their ability to interact on any plant floor. Creating a wider knowledge base across employees makes business continuation possible in times when it’s difficult to fill positions, Mr. Goscinski noted.

The program is designed to give production supervisors the necessary training to manage other people. Showing those employees that the company is willing to invest in them to further their career is one way to retain skilled workers.

At AIB, training and retaining employees is just as important as attracting them.

“To me, all those things go together,” said Brian Strouts, vice-president, baking and food technical services, AIB International. “You may attract somebody, but if you’re not training them properly, they’re not really going to benefit the company, and in the long term they’re not going to feel like they’re part of the team, and they’ll move on.”

AIB recently expanded the number of online learning products it offers, adding several new modules into its interactive Baking Specialist Online Collection released about three years ago. Enabling companies to train employees at their own pace, these online programs offer an alternative to offsite technical training. AIB designed its programs to focus on what’s important to any given company or facility location. For example, a company can customize a program specifically for mixer operators.

Training is an investment, and Mr. Strouts recommended that companies compare their own training budgets with the number of people they want to train annually based on current rates of employee turnover. For example, if a bakery needs to fill 10 trained positions, it should train 20 employees. 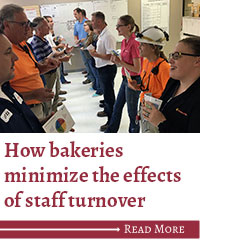 “If you start with 10 employees, you may only have five of them still working for you in a year,” Mr. Strouts said. “You need to be training 15 to 20 employees because that’s going to give you a better chance of filling the 10 trained positions.”

AIB recently worked with a baker that had a worrisome level of turnover. People were leaving so fast that management couldn’t train them before they left and took another job.

“If you can’t attain stability because employees are revolving so quickly, it’s really difficult to reach the efficiency, margins and product quality that you need,” Mr. Strouts said. “Employee investment is key to all those different metrics.”

He added that AIB International advocates that one of the best ways to stop hemorrhaging turnover of employees is to invest in them. Training can be the bait to keep employees on the hook.

Coming up for air

There isn’t one specific solution to overcome the skills gap issue. Instead, a combination of strategies must be employed to address current and future issues, and bakers, suppliers and associations must collaborate to address the skills gap. 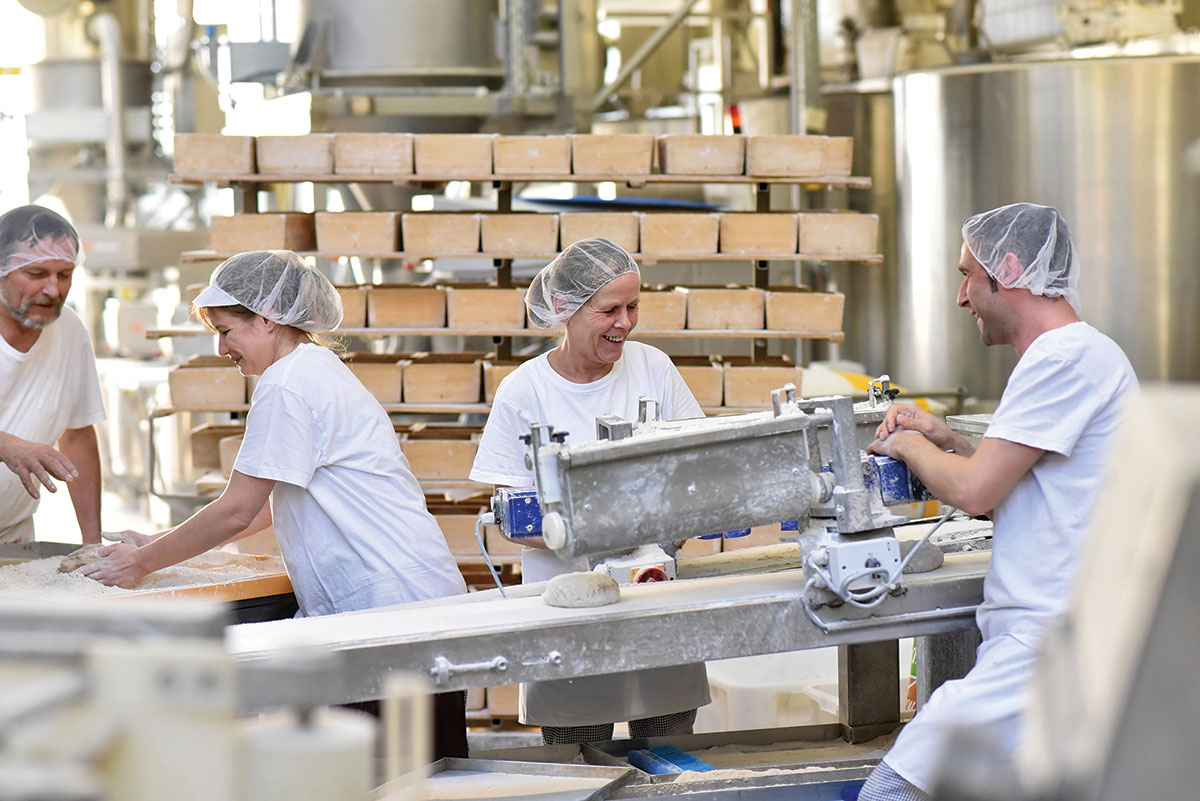 Bakers are doing a lot on their own to mitigate the harm caused by a weak workforce. Dave’s Killer Bread, Milwaukie, Ore., and its Second Chance program provides opportunities for people with criminal backgrounds to rejoin the workforce. Other companies are experimenting by connecting with veteran organizations. Others are reaching out to immigrant families.

The Bakery Cos., Nashville, Tenn., is increasing employee engagement through company surveys to see how the company can improve. It also has created social activities to create an attractive culture. Flowers Foods, Thomasville, Ga., is addressing a multi-generational workforce, often three generations, by communicating with younger workers differently with increased feedback and more defined career paths.

No matter which pool of workers baking companies are trying to tap into, they should always remember the resources available to them.

No one answer will close the workforce gap, but manufacturers, academia, associations and communities can provide a foundation to lessen the gap over time.