We use cookies to provide you with a better experience. By continuing to browse the site you are agreeing to our use of cookies in accordance with our Cookie Policy.
Skip To Content
Home » A.S.B. names Baking Hall of Fame honorees for 2019

Mr. Lummus was the co-owner and c.e.o. of Stewart Systems, Inc. and its subsidiary, The Middleby-Marshall Oven Co. In 1971, Mr. Lummus entered the bakery equipment manufacturing segment when he purchased a stake in Stewart Engineering. He led a turnaround there that included Stewart’s acquisition of Middleby-Marshall and increased sales through the application of leading-edge technologies, including conveyorized systems and computer-integrated manufacturing. He also helped develop turnkey, multi-vendor equipment platforms for bread and bun bakers.

In later years, Mr. Lummus negotiated the sale of Middleby-Marshall to the TMC Corporation, now known as The Middleby Corp., where he became a director for 30 years. Mr. Lummus also has held directorships in the American Bakers Association (A.B.A) and BEMA.

Mr. Trausch was born into the baking industry and worked in his family’s bakery, Trausch Baking Co., until he was called to serve in the U.S. Army during World War II. After the war ended, he enrolled at the American Institute of Baking. Mr. Trausch then rose through the ranks of his family’s bakery, where he eventually became president. Trausch Baking was later acquired by Heileman Baking, and Mr. Trausch was selected to run its new division where he helped transform it into a leading U.S. bakery and became c.e.o.

Throughout his career Mr. Trausch valued innovation and new technology. His ability to create both premium branded products and lower-cost private label products at the wholesale level introduced a new sales approach for bakeries. He was also an early adopter of continuous proof-and-bake systems. A dedicated industry professional, he served in various roles at A.S.B. and was a member for 50 years. He also served on the board of directors at the A.B.A., the Quality Bakers of America, The Long Co. and G. Heileman Brewing Co. 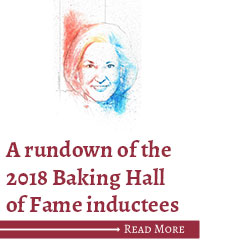 “These individuals all showed magnificent leadership and represent the best qualities of compassion, forward thinking and personal judgment,” said John Del Campo, chair of the A.S.B. Baking Hall of Fame Evaluation Committee and manager, REPCO Bakery Division. “Speaking for all members of the evaluation committee, it is an honor for us to look at their accomplishments. They inspire our future by their examples.”

The Baking Hall of Fame has inducted 82 individuals since 2006. From bakeries and allied equipment and ingredient suppliers to schools, service organizations and publishers, honorees come from every corner of the baking industry.

“The baking industry and its allied suppliers continue to provide us with excellent candidates for Baking Hall of Fame honors,” Mr. Del Campo said. “The committee thanks all those who nominated individuals for the coming year’s honors. It was an extraordinary list.”

To learn more about industry leaders that are part of The Baking Hall of Fame, click here.