A formula for investing in safety

INDIANAPOLIS — One of the most important words in a baker’s vocabulary is “safety.” It has to do with producing foods that are safe for consumers to eat, of course, but it also pertains to keeping workers safe when they’re making those products.

“If your priorities are in order as far as having safety concerns, that’s an indication to your employees that there is a connection and a driving force behind getting it done,” Mr. Anderson said, noting that employee safety is an area where bakers should strive for nothing less than excellent.

In fact, he instructed companies to see safety as an investment that requires commitment as well as involvement.

He referenced a formula that is used by OSHA to measure direct and indirect costs of a workplace injuries. 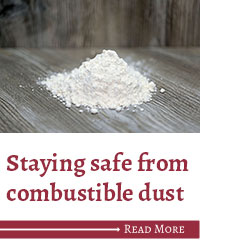 “An indirect cost of an injury is typically about five times what the direct cost would be,” he said.

The sum of those costs is then multiplied by the profit margin, Mr. Anderson said, and that is the total dollar amount of revenue required to offset the loss.

For example, he noted, spending $10,000 on safety measures such as a catwalk around the mixing station is a worthy investment to mitigate the risk of facing up to six-figures in lost revenue … or having to call a worker’s family with devastating news of an injury or death — a loss much greater than any monetary cost.

“You can prevent injuries from happening in the future when you can justify the expense,” he said.

Further, Mr. Anderson suggested, the investment is about more than just finances. It also requires commitment and involvement from a company’s management as well as staff. When employees are involved and engaged in creating a safe work environment, productivity and quality will naturally improve, he said.

It’s also an opportunity to use safety practices as an effective sales tool because many customers want to hear about good safety practices for the foods being produced and the people who make them.