We use cookies to provide you with a better experience. By continuing to browse the site you are agreeing to our use of cookies in accordance with our Cookie Policy.
Skip To Content
Home » Lessons in leadership: Corporate culture’s effect on operations

In part two of Baking & Snack’s Lessons in Leadership series, the three executives explain how workplace culture has affected their bakeries’ performances. The discussion was based on the leadership principles of the nation’s founding father, President George Washington. Leading the panel was Peter Cressy, Ph.D., retired U.S. Navy Rear Admiral and director of executive leadership management and strategy programs at the George Washington Leadership Institute.

Peter Cressy: We talked about vision and how it helps establish company culture — or even reflects it. Credibility is tied to company culture. Let’s discuss that.

Bill Quigg: When we built our bakery the primary and fundamental reason we did it was a cultural reset. We had a facility in Indiana that was built in 1923 — dating back to 1902 — and it had a very ingrained culture. As much as anything, we said, “We’ve got this great foundation of all these things we’ve done well for over a century, but we feel like our culture could use a refresh.” So, to be able to very selectively choose folks who could transfer from the Indiana facility down to our Kentucky plant — and then my wife, Felicia, is in charge of our Family Pride department, which is human resources — she literally interviews every single person that we hire. She is the keeper of the culture from that respect.

Not only physically did we try very hard to have the facility reflect the culture we wanted, but it also comes down to what do we do every single day. Certainly, we have fun things like ping-pong tables and massage chairs and things that are cool and gives us a reputation in town of being kind of fun and little bit Silicon Valley. But it’s really about how we interact with one another. Are we having fun? Are we smiling?

Massage chairs in Kentucky? What would the Kentucky distillers think of that?

Mr. Quigg: Those massage chairs are the best investment we ever made! My wife and I gave two of them to the company for Christmas.

We respect the hard work they do on the floor, so when they’re not on the floor, we want to treat them as well as we possibly can. They’ve earned it. We try to make it super comfortable for them.

Felicia was just saying, “I’m frustrated because we’re getting turnover because some people are struggling with the 12-hour shift.” We do a 12 by 4 so they can have a three-day weekend. That means they’re on their feet 10 hours in a day. We’re having people who are quitting, and that’s frustrating. But she interviewed four people, and all four of them were referrals from the people who had quit. That’s about the best endorsement you can get.

Tim Cook: There are two things there that are critically important that we don’t talk enough about. One is hiring for culture. That’s a big part of what we do. If we believe, through the interview process, that you’re not going to fit into our culture, then nobody on our team will compromise. That’s big for us.

The second part of that is how you review the people in your organization after they start. We are sticklers — I am a stickler — that there are two reviews done a year: one formal, one informal. And in that review process, everybody in the company gets direct, constructive feedback in terms of what they’re doing well and what they’re not doing well. We make a part of the review process our company values and mission. So, people are actually graded on how well they are integrating into our culture.

Could you make a statement of what you think your culture is?

Mr. Cook: For me, our culture is best summarized in our company values. We have five values: three are aspirational, and two of them are innate. The first is passion; that’s one of our innate values. The people in our company have always been very passionate.

Then we have three that are aspirational followed by the fifth one: fun, which is just who we are.

The others are responsive, accountable and consistent. Those are aspirational. They’re things you’d hope and expect out of the people in your organization. But, those values give us a common language to talk about.

It’s interesting that you call them values; Washington would have called them virtues.

Mr. Quigg: Tim, when you talk about people fitting the culture, how do you ensure diversity with that? 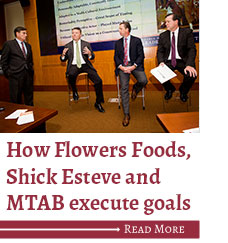 Mr. Cook: On the surface it seems like a challenge, but what we have found is that it actually enables us to be more diverse. Because instead of looking at what we perceive a person to be, when we start measuring how well they’d fit into our culture, all of a sudden, gender, race, age — all of those things — are washed away.

We do some pretty extensive analysis of people before we bring them on. We do it at different levels of the organization to different levels of analysis. We found a system we really like that is self-administered. It gives a good view on whether people are going to fit into our culture, and it’s a great way to give them feedback once they become part of the organization.

Brad Alexander: We were a regional baker at one time, not that many years ago. In the past decade or so, we experienced a lot of acquisitions and geographical expansion. It was a challenge bringing many new people on board and assimilating them to our culture and how we do business. We brought many new employees to Thomasville, Ga., for intensive, day-and-a-half sessions that covered the company’s history and its values, mission, and strategies. They had the chance to have dinner with our senior leadership and talk about what makes Flowers unique and about their roles and responsibilities. About 20 to 30 employees participated in each of these sessions. We had more than 200 employees go through the program in about two years. It took some time, but it was important.

Flowers is a personal company. We really work to foster an environment of trust and service within the team. We have 47 bakeries in the U.S. and many of us who work out of the home office are gone a lot so we can be in the field — at our bakeries and in the market. My job is to help the Flowers team succeed and make sure they have the tools to achieve that. All our executives think this way. Having lunch with bakery department heads, walking the plant floor, being in the market with our sales team, it builds that trust.

To read part one of the Lessons in leadership series, click here.