We use cookies to provide you with a better experience. By continuing to browse the site you are agreeing to our use of cookies in accordance with our Cookie Policy.
Home » To increase impulse purchases, pie makers get creative

Unless certain holiday seasons are around the corner, most consumers don’t usually walk into a grocery store with pie on their shopping lists. Pie is an impulse purchase.

So, a creative approach is key when it comes to stopping shopping carts. For example, St. Louis-based Schnucks stores recently developed a marketing display for Rocky Mountain Pies that incorporated bright colors, easy visual access and a tagline that read, “We only have pies for you.”

Bakeries can come alongside retailers in this process, too.

“Our biggest opportunity to grow sales from a retail level is January through September,” said Par Grandinetti, president, Rocky Mountain Pies, Salt Lake City. “Pies are not easy for stores to retail, so our challenge is to make it easier for them so we all win.”

Instead of expecting retailers to build a display, Rocky Mountain Pies does the work by adding creativity to the packaging, increasing the visual appeal of its products. The bakery’s Red, White and Blue Pie has different sections of cherry, apples and berry and is packed in an American flag box to drive home the theme.

Rocky Mountain Pies also has hand-laid lattice fruit pies and uses that design as a point of differentiation. 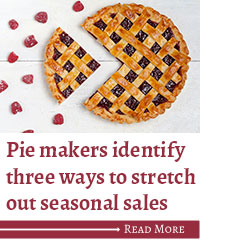 “Hand-laid lattice pies like grandma used to make are pretty hard to do in a manufacturing arena, but we slow our lines down and take the extra time,” Mr. Grandinetti said. “A hand-laid lattice fruit pie is where you get to see this creativity and this great fruit coming through the lattice strips.”

Greg Menke, chief executive officer of Something Sweet, New Haven, Conn., added, “Feedback from in-store bakery buyers is that a key to catching a consumer’s eye is less label and more pie.”

Many retailers are doing this by shifting from a traditional cardboard box display to a plastic base-and-dome or a clear plastic clamshell container. Although boxes can be stacked and grabbed more easily, the clear plastic displays give consumers better visual access.

“Buyers like packaging that showcases the product by highlighting the attractive visual attributes of the pie,” he said. “Capturing the consumer’s attention is critical in a category dominated by impulse buys.”

“Merchandising extends beyond the in-store bakery,” he said. “Pies can be merchandized in the deli or prepared food departments as a dessert option for someone looking to put together a meal for the evening.”

Social media also makes a difference and lets consumers see products before they get to the store.

“With people taking pictures of their food and posting it on everything, I think that expands minds a little bit and allows them to think differently about pie,” Mr. Grandinetti said. “They might be a little more willing to try something they may not have tried before just because they’ve seen it on Instagram.”