We use cookies to provide you with a better experience. By continuing to browse the site you are agreeing to our use of cookies in accordance with our Cookie Policy.
Home » JSB Industries’ key to success

CHELSEA, MASS. — It’s never too cool for school at JSB Industries. That’s because for this producer of muffins, filled bagels and other sweet goods, every day is a learning experience at a facility in Chelsea, Mass., where the company’s headquarters is based, and in its bakery in Lawrence just a short 30 miles away.

For John, Scott and Brian Anderson, the three brothers who handle day-to-day operations, it’s all about teaching, listening and learning. The teaching comes from their customers — who are always No. 1 — and father, Jack Anderson, who serves as president and chief executive officer. The iconic entrepreneur founded the company in 1978. As the legend goes, Jack opened a sandwich shop and quickly discovered that adding muffins and coffee to the menu dwarfed everything else that he had been selling.

“When my dad started the business, I saw him scooping muffins with an ice cream scoop by hand, and now I’m seeing us making 40,000 muffins an hour,” Scott Anderson said. “It’s impressive to see the growth of the company in 30 years.”

Although the JSB Industries name sounds pretty corporate, it’s really quite simple. Jack Anderson renamed the company after his sons joined the business, which has broadened its portfolio of sweet goods to include cornbread, gourmet cookies and more.

Always the student, Jack Anderson relies on the customer-first philosophy to earn his degree in success. Just look at the company’s SunWise line of crustless sunflower butter and jelly sandwiches that are a thaw-and-serve, peanut-free alternative and a hit at K-12 schools throughout the nation.

Ten years ago, his dad ran into a young entrepreneur who made SunButter and jelly sandwiches by hand and wanted to sell his North Dakota business.

“We purchased the company, brand and some of the equipment five years ago,” Scott Anderson recalled. “We were doing about 20 pieces a minute at that time. Once we began producing them on our own, we partnered with a company that made the equipment line to get to the efficiencies and throughput that we needed.”

Two years ago, the company installed a new high-speed line that now produces 160 to 170 crustless whole grain sandwiches a minute for retail as well as schools, colleges, health care, and other institutions.

And the lesson learned?

“We’re still growing leaps and bounds in school food service; specifically, K-12 is our sweet spot,” Scott Anderson said. “The SunWise line is made for that channel where there are a lot of concerns about allergens. That line caters to giving children protein and whole grain bread without introducing nuts or peanuts.”

Currently, food service accounts for 65% of JSB Industries’ sales, and of that, 75% comes from K-12 schools, including the New York City school district, one of the company’s core customers. In addition to branching out to colleges, the business participates in the c-store, in-store bakery and co-manufacturing channels in a big way.

“We’ve always followed the mantra that ‘we don’t care whose name is on it as long as we’re making it profitably and consistently,’” Scott Anderson said. “We’re one of those companies that want to manufacture when other brands may want to get out of the manufacturing business and rely on people like us who have the capacity to do it.”

As a result, JSB Industries is making its debut at the Private Label Manufacturing Association’s annual show in Chicago in November.

“A lot of supermarket and convenience store chains and even colleges want their logo on the items, so we started putting some packaging ideas together,” said Roger Piffer, director of marketing and customer service. “That’s where I see this year is going to be the private label jump for this company.”

Making that jump is all about the learning process that identifies growth opportunities for JSB Industries and its customers. Take its new cornbread bowls, which were introduced at the School Nutrition Association annual conference in Las Vegas.

Not surprisingly, the idea came from Jack Anderson, who after eating soup out of a bread bowl, saw the potential for transforming JSB’s popular-selling cornbread loaves into a component of the meal occasion. The company’s pan supplier developed a pan for making the 2.5-oz bowl that can hold 1 to 1.5 oz of chili. Prior to the show, Mr. Piffer email-blasted school directors for their responses.

“And the immediate feedback is that people love it,” he said.

However, they had a question involving menu suggestions, so Mr. Piffer immediately added a bunch of concepts to the company’s website. For retail, it also offers a 2-pack of the cornbread bowls for a convenient, light meal.

Although the Chelsea bakery produces gluten-free products once a week, clean label items provide greater opportunities, said Scott Anderson. As a major supplier to K-12 schools, the learning curve for clean label isn’t that great, but it’s still a challenge to ensure the price is right.

“Consumers want all of that ‘junk,’ so to speak, off of the label and out of their products,” Scott Anderson said. “We have a lot of schools asking for no artificial flavors. Trans fats have been gone for years. Every year, we’re seeing one or two items going closer to completely clean label, which is expensive right now and hard to sell in schools.” 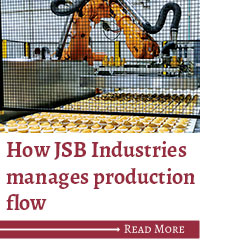 That said, the company has been a proponent of offering indulgent baked goods that also include that halo of wholesomeness, whether through fiber, low fat or low calorie — or all of the above — in its Smart Choice brand, which follows the guidelines of former First Lady Michelle Obama for school nutrition. It’s even reformulating many products in its line to remove artificial flavors and preservatives.

“The biggest trend we’re seeing in the last three to five years is that consumers just want to know what they’re eating,” Scott Anderson said.

Being a thaw-and-serve baked foods producer, the company also understands that freezing provides the most natural and clean way to extend shelf life.

Perhaps the greatest marketing initiative involves promoting its peanut-free production facilities. Peanuts weren’t a big issue in many schools 15 years ago. Back then, PB&J sandwiches were a mainstay in many lunchboxes and bags.

However, times have changed.

“It was sometimes an issue then, but it wasn’t as much of an issue as it is today,” Mr. Piffer said. “So marketing a delicious product of SunButter and jelly, the kids just eat it up. It makes my job easy if our products are really good, and the kids love them. If the kids love them, they’ll do anything for them, and their parents will do anything to keep that allergen away from their children.”