The tenants of controlled aeration

A quality batter comes down to aeration. It’s not a game of incorporating as much air as possible, but it is about getting the right level of aeration appropriate to that product — and doing so efficiently.

For the best results, bakers must understand what they are mixing and how best to get the level of desired aeration. The agitator and its mixing implement are the heart of the mixer and the key to optimal levels.

“The size, shape and position of the agitator arms on the actual spinning rotor is critical to get a good mix,” said Andrew McGhie, director of sales, Shaffer, a Bundy Baking Solution.

Understanding the batter and knowing how the mixer’s components work together to aerate is how suppliers determine the best setup for the baker’s finished products.

“The first challenge was to understand in a scientific way the aeration process and what parameters were necessary to obtain the required density: the diameter of the tool, its shape, its speed of rotation and its speed of revolution,” Mr. Bartsch said. “To aerate efficiently, it is necessary to have a tool shape that favors the introduction of air bubbles but without breaking them.”

The mixing tool that works for one batter might not be the best fit for another. For example, a tool that breaks the surface of the batter will capture more air. A wire whip breaks a batter’s surface a lot and delivers the highest amount of aeration. This might seem ideal; however, not all batters need that much.

“There are a lot of batters where they don’t want it too aerated for weight control,” said Damian Morabito, president, Topos Mondial. “Whips are only used when you want really good aeration like in meringue toppings and angel food cake.”

For batters that need less, he suggested a tool like Topos’ harp-style implement, which submerges into the batter and breaks the surface less.

While the mixing tool does much of the work incorporating air into the batter, a scraper can also ensure batter quality.

“The presence of a scraper is often necessary to optimize the homogenization of the products that would stick the side of the bowl in the absence of the scraper,” Mr. Bartsch said.

Bakers also need to consider the intensity of the mixing when selecting the right agitator configuration for the product. Ken Langhorn, technical director, Charles Ross & Son Co., specified that batters can face competing issues when it comes to the shear energy in the mixing bowl.

“A higher level of shear can be desirable for proper dispersion of some components,” he explained. “However, that same level would be detrimental to some of the more delicate items added to the batch.”

A control system can address this by ensuring the correct agitators run at the appropriate speeds — and at the right moment — in each batch.

While the tools in the bowl are incorporating air, the agitator’s speed and position can make the process more efficient.

“If the tool is too small relative to the diameter of the bowl, it will take longer to get to the desired result,” Mr. Morabito explained. “With the larger tool, you’re going to engage more batter per revolution than a smaller tool relative to the bowl.”

Shaffer strategically positions the bars of the mixer’s rotor to get the most efficient agitation possible. The rotors are not placed in a straight line but distributed around the agitator shaft.

“Because they’re offset, we get counter-currents going backward and forward to maximize the aeration of the batter as it’s being mixed,” Mr. McGhie said.

The bowl features stators, which are also offset — but also stationary — as the agitator does its work.

“They’re positioned in a shape that allows us to get some counterflow as the agitator is spinning, so not only is it pushing the batter around in a direct circular motion, but it’s also getting some lateral motion in the batter,” he continued.

The right tool, speed and bowl geometry brings efficiency that enables operators to achieve the desired aeration without overmixing the batter.

“You want to get to the aeration before you have a negative effect such as the batter being too hot or overmixed,” Mr. Morabito explained.

With the proper tool and rpm, he said bakers can see dramatically reduced mix times to achieve the right aeration and mix quality as well as inclusion dispersion.

Once these elements have been nailed down they can be programmed into the mixer’s software, enabling operators to easily repeat the process with the same outcome. A recipe screen prompts the operator to ensure the steps are followed that will result in the same batter again and again.

A boost of control

Getting the right mechanics of mixing is critical to proper aeration, but the assistance of pressurized bowls and air injection can offer bakers more control over the process.

Air injection is standard on Tonelli’s continuous batter mixers and makes the amount of aeration adjustable and programmable.

“That gives the baker the flexibility to fine-tune the final result he or she is trying to accomplish,” said Kevin Wilkinson, North American sales, Tonelli Group. 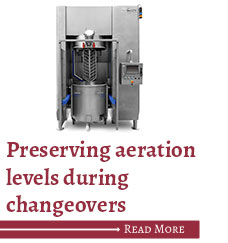 On its continuous mixers, E.T. Oakes offers the Oakes Mixer Controller (OMC), which lets the operator select the initial specific gravity to be read from the mass flowmeter. This updates the injection air requirements automatically in the PLC and outputs the appropriate amount of air.

On a planetary mixer, a pressurized bowl can give bakers more control over aeration.

“If the baker is trying to accomplish a low specific-gravity batter, the planetary batch mixer can be pressurized, which adds aeration and therefore reduces the specific gravity,” Mr. Wilkinson said.

Pressurized bowls for planetary mixers not only increase the aeration but also improve the efficiency of the incorporation of ingredients, Mr. Bartsch said. And while air injection can be useful to speed up the process, he said, it doesn’t replace the work of the agitator.

“It cannot completely supersede the perfect kinematic function of tools,” he said.