Almost four out of five consumers rate protein content as important in their food and beverage purchase decisions, according to the market research firm N.M.I. The firm said about 40% of all millennials indicate “high in protein” as a very important product attribute. For baby boomers, 39% of women said protein is important for their diet compared to 27% of male baby boomers.

Increasingly it’s more than just protein content that sells. It’s the protein’s story. Consumers want a better understanding of how it was sourced, including country of origin, animal welfare, genetic modification, carbon footprint and more. Suppliers are responding, and bakers now have a growing toolbox of protein ingredients — traditional and specialty — to fortify everything from sweet bakery items to savory snacks.

Just as dairy proteins long have been used in baked foods for functionality, the same is true of eggs. In fact, fortifying with proteins from such a common ingredient makes a lot of sense.

Rembrandt Foods offers a range of egg proteins for baked foods, including a new egg white protein isolate that is more than 92% protein on a dry basis, making it comparable to whey and soy isolates. The technology de-flavors the protein and reduces its foaming, gelling and whipping properties. The partially agglomerated form is optimal for boosting protein content in bars, nougats, baked foods and snacks, according to the company.

Gelatin, too, contributes protein to baked foods. However, the main reason for its use is its multiple functionalities. In addition to possessing thermo-­reversible gelling behavior, gelatin has excellent binding and whipping functions. It also acts as a stabilizer and emulsifier, making gelatin useful in fillings and frostings, said Heather Arment, Gelita marketing coordinator for North America.

Bakers also are investigating the use of non-traditional animal proteins in baked foods. International Dehydrated Foods, Inc., markets defatted spray-dried chicken protein powders that contain no ­carbohydrates. The powders are made from 100% real chicken raised in the United States.

“Chicken is the most common animal protein consumed globally and often the food source that bodybuilders and serious athletes depend on most for quality protein,” said Stephanie Lynch, vice-­president of sales, marketing and technology.

The company offers standard and organic versions, both of which contain more than 80% protein and may be used in baked and snack foods. 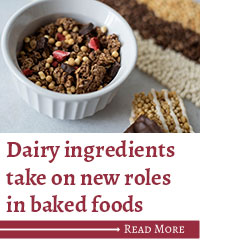 Insect protein was a hot topic at IFT18, the Institute of Food Technologists’ annual meeting and food exposition, held July 15 to 18, 2018, in Chicago. C-fu Foods, a Toronto-based processor of insect ingredients, won a $5,000 cash prize and the people’s choice award at the inaugural edition of the IFTNEXT Food Disruption Challenge. Designed after the television show Shark Tank, six finalists — of more than 60 applicants — pitched their innovation to a panel of food industry judges and a ballroom packed with IFT18 attendees.

C-fu Foods, a name derived from “cricket tofu,” markets a number of insect-based foods, but the company believes its future is with ingredients. The award will help grow that business, which includes insect protein concentrate. This ingredient can be made from more than 2,500 documented edible insect species, with species influencing flavor, texture and color.

“Compared to conventional livestock, insects require a significantly smaller amount of land, water and feed while delivering similar quality and levels of micronutrients and protein,” said Lee Cadesky, co-founder and chief operating officer. “Our real goal is ingredients. That is where we feel we can have a real impact. We want to empower entrepreneurs all over the world to create great products that I couldn’t even think of.”

For now, bakers may want to explore the company’s cricket flour, which is a 65% protein powder made by roasting and grinding its only ingredient: whole crickets. The company makes it from Acheta domesticus crickets, which have a mild, nutty flavor and light amber color.