We use cookies to provide you with a better experience. By continuing to browse the site you are agreeing to our use of cookies in accordance with our Cookie Policy.
Home » Consumers bypass the cafe for caffeinated bars

Trading in a cup of joe for a snack bar might seem a bit unusual, but if the bar provides the same boost in energy — and doesn’t stain a shirt — many consumers are all for the idea. With the demand for tasty caffeinated bars on the rise, snack producers are drumming up new ways to fuel consumers.

According to Innova Market Insights (IMI), caffeinated bars, whether sourced from coffee or tea, experienced 50% annual growth in product launches between 2014 and 2018, while total cereal, energy and sports bars grew just 7.3% in the same period.

“The ongoing popularity of coffee drinks such as lattes, cappuccinos and cold brew and the expansion of coffee flavors beyond beverages into chocolates, cookies, ice cream and beer is also boosting demand for coffee-flavored bars that offer a delicious source of energy and protein,” said Virginia Lee, insights and innovation manager, IMI.

Taste is a big driver for success when incorporating caffeine, especially when it comes to consumers who prefer a sweeter coffee flavor. The bar varieties from Boston-based Eat Your Coffee are inspired by cafe drinks such as salted caramel macchiato, fudgy mocha latte and peanut butter mocha. The granola bars from Awake, Mississauga, Ont., include flavors that pair well with caffeine such as cinnamon bun, dark chocolate caramel, and dark chocolate and peanut butter.

Tea in foods also has spiked over the past two years, with 20% growth, said Marcia Mogelonsky, director of insight, food and drink, Mintel, in a recent article called “A New Blend: Salty Snacks Meet Tea and Coffee.” Popular flavors include matcha and other green teas as well as black teas that are being seen in cakes and biscuits.

A balance of protein and caffeine can be more enticing than the caffeine alone, too. This year, RXBAR, Chicago, introduced a Coffee Chocolate variety. Not only does it have 5 mg of coffee caffeine, but it also includes 12 grams of protein. 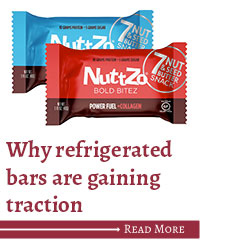 In its new Energy Bars, No Cow, Denver, includes 45 mg of coffee bean flour, the equivalent to half a cup of coffee. The caffeine is paired with considerable protein — 12 grams per serving — in the bars, which can contain oats, nuts and almond flour.

But it’s not enough to provide protein and energy in caffeinated bars. Snack companies are working to cut back on sugar and calories. No Cow developed a product that contains 1 gram of sugar; many energy bars have as much as 20 grams.

The green-tea based snack brand Verb Energy Co., based in New Haven, Conn., discovered its 190-calorie bar had too high of a calorie count for its consumers, so this year it revised its line into energy bites. With just 90 calories, these bites still contain as much caffeine as a shot of espresso but have fewer calories.

“Our customers see our product as an energy product first and foremost,” said Matt Czarnecki, cofounder and c.e.o., Verb Energy. “They are choosing this over a cup of coffee.”