We use cookies to provide you with a better experience. By continuing to browse the site you are agreeing to our use of cookies in accordance with our Cookie Policy.
Home » U.S.D.A. says retail baking ingredient prices mostly down from year ago

KANSAS CITY — The total cost of a “basket” of key baking ingredients this holiday season was down 6.2% from a year ago, according to the Economic Research Service of the U.S. Department of Agriculture. Long-running Sosland Publishing Company bakery ingredient indexes, published in Milling & Baking News and Food Business News, also were mostly down from 2017.

“This decrease is driven by lower prices in 2018 across four of the five foods,” the E.R.S. said. “The largest savings are found in flour, sugar and milk — flour prices are down 9.4%, sugar prices fell 9.3% and whole milk prices are 7.8% lower.” 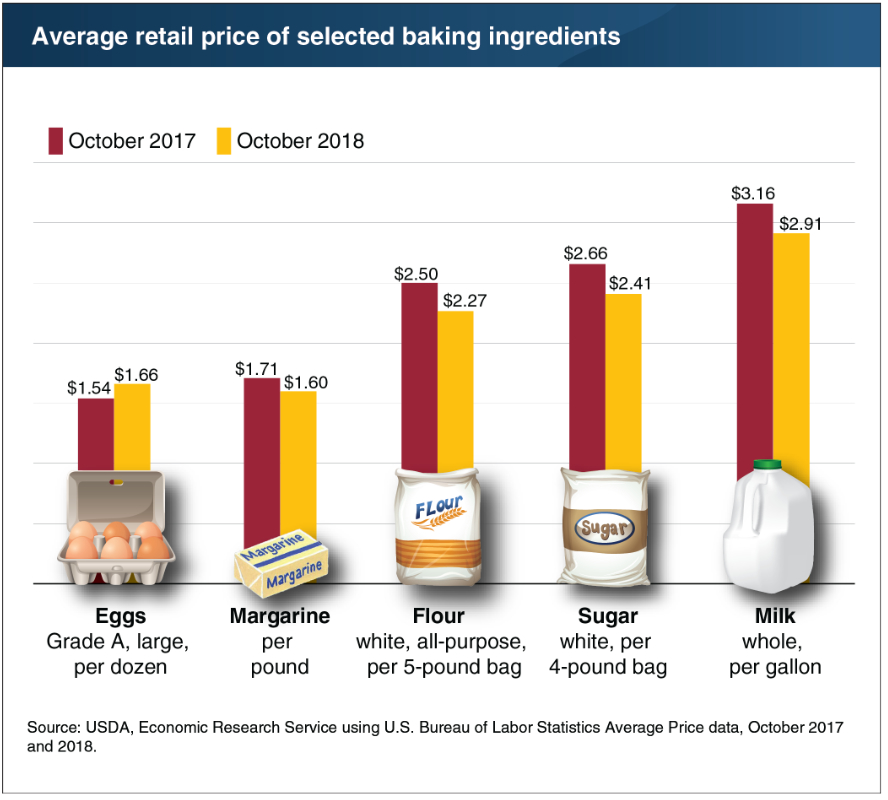 “Due in part to prices adjusting from lows in 2016 and 2017, egg prices have been moving upward in much of 2018,” the E.R.S. said. “However, additional savings could be found in December as grocers often offer discounts on holiday food items.”

Values for the seven Sosland Publishing Company bakery ingredient indexes, which track prices for bulk ingredients used by food manufacturers rather than retail values as did the E.R.S. in its report, in late October were mixed compared with a year earlier, but in December all had declined from October ,and most were down from a year ago. Also, since the Sosland indexes are based on standard industry formulas, none are directly comparable to the E.R.S. “basket” of baking goods.

Comparing specific ingredient values as of mid-December, Sosland reported prices for eggs were down 34% (retail dozen, while egg products were mixed), soybean oil (versus margarine) was down 10%, flour was mixed, sugar was unchanged and dry dairy products (dried versus milk) all were higher.