We use cookies to provide you with a better experience. By continuing to browse the site you are agreeing to our use of cookies in accordance with our Cookie Policy.
Home » How Hearthside redefines and thrives in the world of co-manufacturing

How Hearthside redefines and thrives in the world of co-manufacturing

Just as impressive is the company’s $3 billion of annual revenue. In November, Hearthside acquired Greencore USA, the US operating unit of Greencore plc, a Dublin, Ireland-based contract manufacturer. Along with a purchase of a Kellogg Company bakery in Indianapolis, the acquisition expanded the Hearthside network from 26 to 38 production facilities and notched its workforce to more than 10,000.

Recognized as one of the nation’s largest cookie and baked snack co-manufacturers, Hearthside enters new high-growth categories with these most recent acquisitions. Focused on what the company calls low-temperature manufacturing, the Greencore USA facilities create products that range from frozen on-the-go breakfast sandwiches and meals to refrigerated sandwiches and entrees. Hearthside predicts that low-temperature manufacturing will grow and that on-the-go eating, as a consumer trend, will continue to expand.

Hearthside was formed in 2009 by Rich Scalise, its current chairman and CEO, on the premise that the US food contract manufacturing industry was ripe for reinvention and disruption. According to Mr. Scalise, Hearthside sought to combine the depth, scale and quality of a world-class manufacturer with the flexible, cost-effective operating model of a startup. “This formula has enabled leading food companies to outsource significant production volumes, trusting their multi-billion-dollar brands to a provider capable of delivering on quality, speed-to-market, innovation and efficiency,” Mr. Scalise said.

The company’s initial major categories, especially bars, were selected based on consumer trend research that pointed to rapid growth. 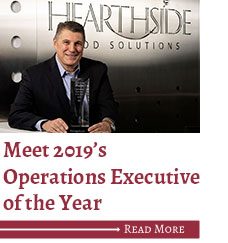 According to Dwayne Hughes, Hearthside’s senior vice-president, supply chain, and Baking & Snack’s 2018 Operations Executive of the Year, the company’s focus is grounded in safety and quality. While Hearthside is pleased with its organic growth, Mr. Hughes and Mr. Scalise are quick to point out that it is a trailing indicator and a result of the business’ fast and flexible operating environment and continuous improvement culture. “The company targets world-class safety and quality scores and boasts a year-over-year improvement in both quality and safety every year since their founding, even as new facilities were brought into the network,” Mr. Hughes observed.

Other growth is less obvious, such as the five-times increase in R&D investments, according to Mr. Scalise. “Aggressive global cost-cutting by leading food and CPG companies has created a need for external innovation resources. Hearthside fills these voids with an extended value chain that includes R&D, recipe development, test kitchens, pilot production lines, engineering, supply chain, business process design and commercialization capabilities,” he noted. “This level of value chain integration and transparency enables the company to deeply align with the needs of leading brand customers.”

Another emerging trend is what Mr. Scalise called “a tidal wave” of new food companies. “Smart and well-funded, they are moving quickly to challenge existing categories and create new ones,” he said. “Often marketing-heavy and operations-light, they turn to Hearthside for turnkey concept-to-consumer value chain solutions, enabling them to focus on marketing and brand development.”

Mr. Hughes described the company’s continuous improvement operating culture as a people-first environment, focused on leadership and accountability. He pointed out that the business invests in training and education programs. Its Hearthside University training program has been adopted by the American Bakers Association as its industry-wide leadership training curriculum. Mr. Scalise points to a strong return on investment gained from raising the skill and satisfaction levels of its employees.

Looking toward the future, Hearthside is investigating other possible categories where it can provide the same level of quality, safety and efficiency. In fact, Mr. Hughes noted its private equity owners — Charlesbank Capital Partners and Partners Group that acquired Hearthside in May —
already have their eyes on potential future acquisitions.

“They’re looking for us to integrate Greencore USA as quickly and efficiently as possible as we continue our journey to becoming a world-class company,” Mr. Hughes said.