A baker’s plan B for reducing sodium

KANSAS CITY — When bakers have replaced or removed as much salt as they can from products, chemical leavening agents are another avenue they may pursue to further reduce sodium. These are often the main source of sodium in cakes and pastries, specifically sodium bicarbonate and acids such as sodium aluminum phosphate and sodium acid pyrophosphate, said Mona Clifford, application technologist, sweet flavors, at Sensient Flavors.

To create the leavening gases to get the necessary rise, a source of carbon dioxide reacts with a food-grade acid that is capable of making gas. This chemical reaction creates the lift in a variety of bakery applications, including cakes, biscuits, crackers, cookies, muffins and pizza crusts. They also impact crumb resiliency, batter strength, structure and the final pH of a product, which affects color and flavor. Chemical leavening agents cover a wide range of ingredients, some high in sodium and others not, which gives bakers options when it comes to reducing this nutrient.

This is because, when formulators make up for the difference in molecular weight between these two ingredients, the results are the same.

“To get the same amount of CO2 release from potassium bicarbonate, you have to have 19% more of it than sodium bicarbonate,” Mr. Berube explained. “If you do substitute at that weight, you don’t have to do anything to adjust the level of leavening acid.”

Ammonium bicarbonate serves well in applications such as cookies or crackers that don’t contain very much moisture. In products where moisture content is too high, the formulation holds onto the ammonium gas produced, which no one is looking for in a finished product.

Mr. Berube urged bakers seeking to change their leavening system to pay attention to the differences in bakes and adjust accordingly.

“If you change the leavening system radically, you might see some differences in the timing of CO2 and the way the product bakes, so that’s something to be mindful of,” he said.

Bakers also can use a combination of alternative bicarbonates with sodium bicarbonate to minimize the impact. Church & Dwight offers these chemical leavening agents as well as flow aids that can prevent caking during usage.

Bakers also can look at the other side of the chemical leavening reaction — the leavening acid — to reduce sodium. When replacing this, formulators must consider the rate of reaction and the neutralizing value.

“The value is used to determine the amount of acid needed so when combined with baking soda, it produces a neutral pH,” said Amr Shaheed, technical service manager, food and beverage, Innophos, Inc. “Neutral pH is important. An unbalanced ratio has a direct impact on pH, and therefore, both color and flavor, which is critical to consumers of baked goods.”

Innophos offers several low or no sodium leavening acid ingredients that vary in both reaction rate and neutralizing value, providing bakers with a range of options for their specific products. 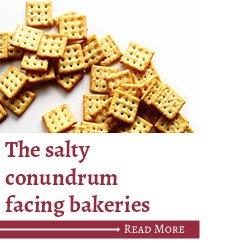 The company’s REGENT 12XX and V-90 products offer fast rates of reaction, providing early expansion in the oven. CAL-RISE, on the other hand, delivers a delayed reaction. Because the CO2 is released at the right time during the baking process, bakers can see ideal volume development in their finished products. It creates a uniform cell structure and is particularly suited to replacing sodium acid pyrophosphate (SAPP).

“When CAL-RISE is substituted for SAPP, it may provide as much as 25% reduction in sodium without having to reduce the level of salt in the formulation,” Mr. Shaheed explained.

“These products can be used to reduce the level of sodium from the leavening acid while still maintaining control of when the leavening gas is released,” he said.

Reducing sodium doesn’t have to result in reducing flavor or quality for baked foods. With the right technical expertise and ingredient solutions, bakers can provide health-conscious consumers a tasty product.

This article is an excerpt from the December issue of Baking & Snack. To read the entire feature on sodium reduction, click here.