NEW HAVEN, CONN. — Thanks to its beginnings as a hand-craft bakery, Something Sweet was well positioned when the clean ­label wave washed over American consumers and landed smack on top of the wholesale baking industry.

“When clean label became a trend, our products required little reformulation since we already had that great foundation,” said Greg Menke, chief executive officer of Something Sweet. “We hate the taste of preservatives, so we’ve historically avoided them. We already had no high fructose corn syrup or p.h.o.s, and we got rid of artificial colors and flavors a while ago.”

Something Sweet didn’t need to get back to the basics … the bakery had been there from the start.

Consumer standards for health and wellness run deeper than clean and pronounceable ingredients. Let’s face it: Decadent sweet goods like crumb cakes and pies aren’t exactly Weight Watchers-friendly. And until Oprah declares she loves them, too, these ­indulgences are fighting an uphill battle. But Something Sweet combats this by focusing on quality over quantity, be it from calories or price points.

As disposable incomes increase for American consumers, they’re paying as much attention to their waistlines as they have been their wallets. Something Sweet responded by adjusting the size of its crumb cakes instead of reformulating for the calorie count. By offering a 5x7-inch crumb cake, it becomes a more manageable indulgence in both respects.

“Many households now are one or two people, so this is a perfect size for cutting into four and creating two dessert occasions,” Mr. Menke suggested. “It’s not too much, it doesn’t go to waste, and we can hit the $5 price point, so it’s also a value.” 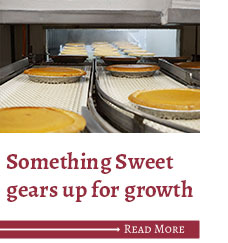 The bakery has plans to offer single-serve pies and is currently shopping new equipment technology that will allow for that flexibility.

When it comes to standards, commercial bakers aren’t only concerned with the needs of consumers. They must also answer to their customer standards as well. With an SQF Level 2-certified facility, Something Sweet is able to meet those increasing demands.

Food safety is a top priority, and that starts with training.

“If someone has never worked in a food plant, they might not understand why they have to wash their hands so much and wear gloves — and change them — so often,” Mr. Menke said. “We have constant training, so our employees do really well with this.”

The bakery has had its Level 2 certification for four years, the most recent having been awarded in May, and as long as Something Sweet has been in production, it has never experienced a recall.

“One recall could ruin a company, especially a small one; that’s why we stress the GMPs and continually train for food ­safety,” Mr. Menke said.

This has prepared the bakery for FSMA compliance, which isn’t an easy task, especially for a mostly manual operation.

“You have to have great recordkeeping,” Mr. Menke said. “You have to stay on top of it, not only for FSMA but also because customers constantly ask for certifications, so everything has to be up-to-date at all times.”

Mr. Menke, who touts 35 years of baking industry experience — four of those with Something Sweet — set up a program to store documents and automatically flag them when one is about to expire.

“Then, all we have to do is call our vendor or supplier and have them resend the necessary documents,” he said, noting the company has about 15 supplier certifications to keep track of for SQF and other third-party audits.

This article is an excerpt from the November 2018 issue of Baking & Snack. To read the entire feature on Something Sweet, click here.