We use cookies to provide you with a better experience. By continuing to browse the site you are agreeing to our use of cookies in accordance with our Cookie Policy.
Home » Baking & Snack’s 2019 Equipment Trends Survey results revealed

Looking back on the past 10 years in the baking industry, it’s been one heck of a ride. When the Great Recession hit in 2008, bakers were growing accustomed to rolling with the punches, having survived challenges like the Atkins craze that impacted so many businesses.

In troubled times, bakers learned quickly to tighten the purse strings and keep their heads above water, and they proceeded with caution. In fact, when Baking & Snack conducted its 2008 Commercial Baking Capital Spending Study, 63% of respondents indicated they were holding year-to-year capital investments steady or decreasing from the previous year.

What a difference a decade makes. Through the recession, the war on gluten, drastic agricultural changes and bloggers bent on bringing down big food, truly the strong have survived.

2018 brought rapid and sweeping changes to the US economy, particularly manufacturing. It’s changing commercial bakers’ outlook and ultimately impacting their equipment purchasing plans. Bakers are gravitating toward strategic investments in equipment that not only streamlines their operations but also moves business forward for the long haul.

The 2019 Equipment Trends Survey — a triennial report conducted by Kansas City, MO-based Cypress Research — examined where, why and how bakers are investing their dollars for manufacturing equipment and how it can propel them toward the future.

“Commercial bakers are now looking at how equipment technology can improve their business,” said Marjorie Hellmer, Cypress president. “They’re not looking at equipment from a day-to-day operational perspective as much as the role it plays in future of their business. And that’s saying a lot for commercial baking.”

Despite the roller coaster of tax breaks, trade wars and the longest government shutdown in history, many ­bakers are reaching for their shades anyway.

“If you look at the outlook, the numbers speak for themselves,” Ms. Hellmer said. It was a generally positive outlook during the 2015 survey, but it’s only gone up from there. After all, the global economy is predicted to grow, according to Bloomberg Businessweek, by 3.7% — the same number it predicted 2018 to close with and the exact pace of growth for 2017 as well. 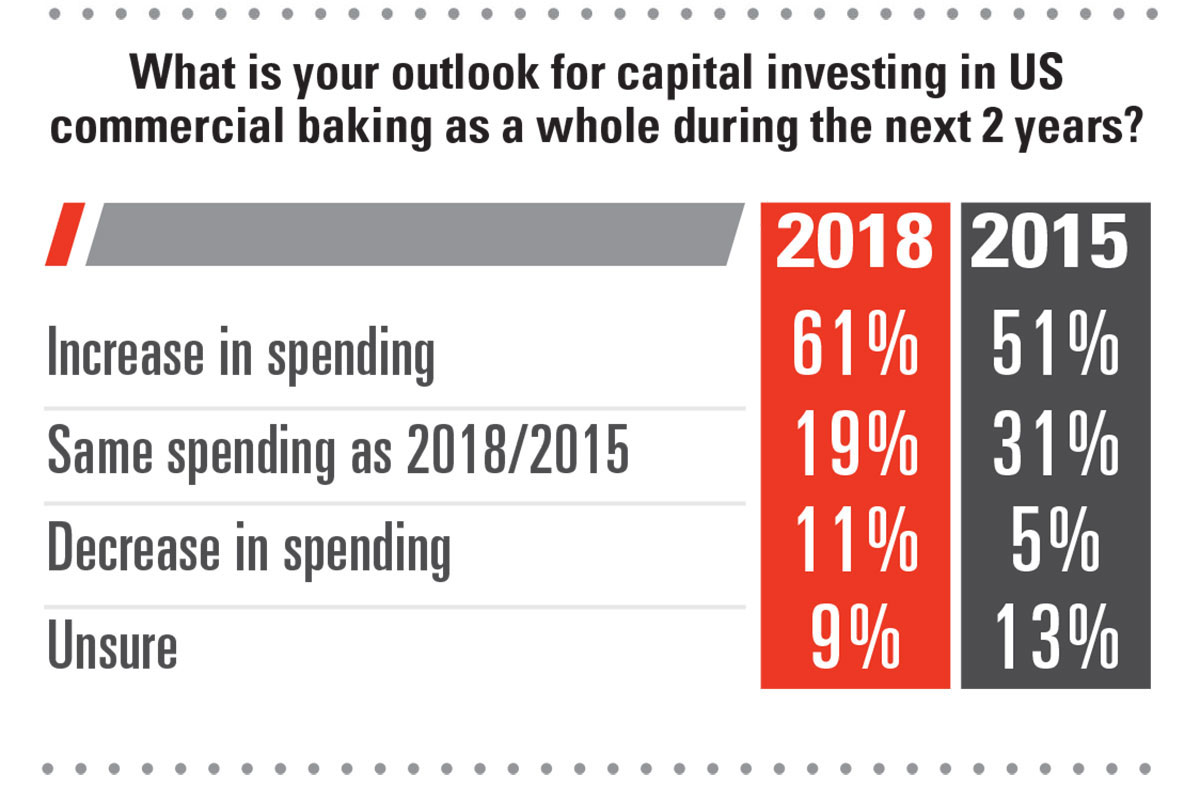 In the US, Businessweek noted, 2018 second and third quarters’ economic growth was at 4.2% and 3.5%, respectively. And for the most part, the same goes for US manufacturing and, specifically, wholesale baking. “What I see from the broader economic outlook and investment perspective — in broader manufacturing — is that capital investing has actually picked up over the past couple of years,” Ms. Hellmer observed. “Prior to that, it was more about just plodding along at a steady rate. There were slight increases but nothing dramatic.”

In terms of the baking industry, the attitude has been generally confident, but capital investments have been controlled. “The outlook has been positive, but not overwhelming amounts were going back into business,” she said. “We saw an uptick in that over the past year, and it looks to continue into 2019.”

As the industry gears up for the International Baking Industry Exposition (IBIE), to be held Sept. 7-11 in Las Vegas, it’s worth peering behind the curtain to see what that increased spending looks like for bakery equipment.

According to this year’s survey, bakers’ optimism toward the economy is translating into investment plans. For starters, 61% of survey participants projected an increase in spending for capital investments over the next two years, a 10% increase from the same survey in 2015. Only 19% indicated their spending would stay the same as the current year (2018), as opposed to about a third (31%) of respondents in the previous survey.

“The industry is at a healthy level,” Ms. Hellmer declared. “When we asked how much spending on equipment changed, more are saying it’s significantly increasing. The outlook has been good over the past several years but with a more moderated level of capital investing. In 2018, we saw what we were hoping to see — a higher rate of positive investments back into companies.” 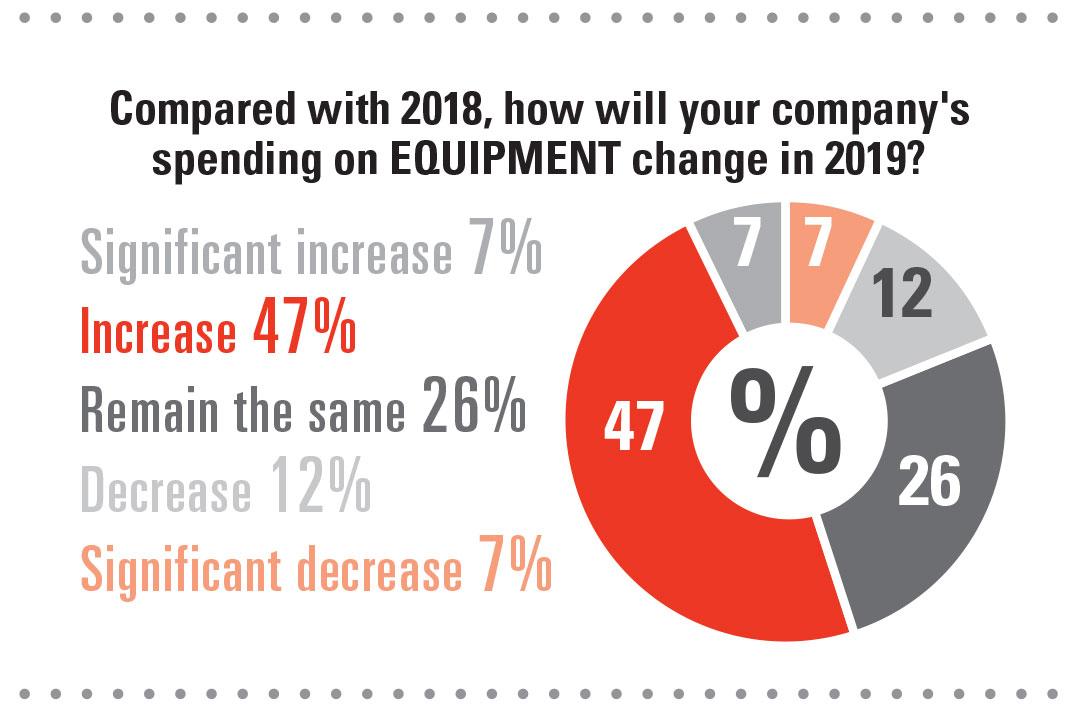 Further, an average of 58% of participating companies’ capital spending budgets was designated for equipment purchases. And as bakers sit in the sweet spot between iba (last year’s behemoth equipment show in Munich) and IBIE, 92% of survey respondents reported plans to purchase equipment in 2019, and more than half projected an increase in equipment spending for the year ahead. Not only that, but two-year projections indicated that 57% of executives anticipate increasing equipment spending for 2020.

Since the economy went back on the upswing, the general sentiment for bakers has been cautious optimism. “To see these levels of current and projected spending reflects the health of the economy,” Ms. Hellmer said.

Bakers indicated faith in the economy, a positive outlook toward capital investing and plans to purchase equipment, but where, exactly, are the dollars heading?

They’re targeting investments for the benefit and longevity of their business. Just look at the survey’s Top 4 goals for 2019 equipment purchases: decreasing labor costs (35%); increasing capacity for existing products (33%); increasing production speed/capacity (28%); and accommodating for lack of labor (23%). 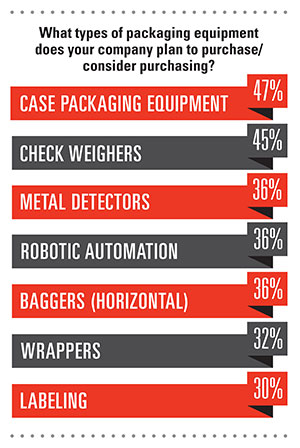 “There’s a larger proportion of bakeries more sincerely focused on those categories for their end goals than we’ve seen in the past,” Ms. Hellmer observed, noting that in the 2015, there was a relatively even spread across a wider number of objectives. These included increasing capacity for new products, improving process ­capability/flexibility, improving product quality/consistency/­accuracy, improved food safety and sanitation, reducing maintenance/repair costs, reducing waste/energy costs, tracking/tracing raw ingredients and finished product, improving food security, and creating more environmentally sustainable operations.

While a certain percentage was dedicated to each of these goals in 2015, the 2018 study revealed an increase in the top three and the appearance of “accomodating for a lack of labor,” a new question in this year’s survey that reflects senior managment’s investment in ­equipment technology to ease the difficulty of finding quality talent.

“Bakers’ investments seem more strategic, more proactive than reactive,” Ms. Hellmer suggested. “They’re not responding to something outside their business; they’re improving business from the inside out.” There’s a clear vision behind how bakers are allocating dollars.

This year, no companies identified food security or sustainability as 2019 goals for equipment spending; however, this doesn’t mean that these initiatives are no longer important. It more likely means they’re issues bakers have under control or ones for which new equipment won’t likely solve. “This tells me that a lot of baking companies have these issues in hand from a capital perspective,” Ms. Hellmer observed.

In other words, tactical or reaction-based pressures have gone down, according to the bakers who participated in the survey, and they’re looking for equipment that can help them reach strategic goals. They’re not so much looking at equipment from a strictly operational perspective — though it obviously has to get the job done — as they are the role equipment plays in the future of the business.

“This is future forward, and that’s saying a lot for commercial baking, a typically conservative industry,” Ms. Hellmer said. For instance, 43% of bakers said they’re considering robotics as their next material handling equipment purchase. This points not only to plans for labor reduction or accommodation but also investing in advanced technology. Only 9% said they had no plans to purchase this type of equipment. Another category — packaging — also indicated just 9% of respondents weren’t planning to purchase in 2019.

In the packaging area, innovation in case packing equipment and checkweighers each got almost half (47% and 45% respectively) of the attention, and just over a third of participants — 36% for each — expressed interest in metal detectors, robotics and horizontal baggers. Wrappers caught 32% of bakers’ eyes, and labeling technology came in at an even 30%.

It’s clear that as long as recession remains a thing of the past, bakers are apt to act on those good vibrations they started feeling in 2015.

With any economic outlook, the job market is always a key indicator. Just as the economy was on an upward trajectory the past few years, employment has followed suit … perhaps even more than expected. In January, Associated Press (AP) headlines announced, “US employers went on a surprising hiring spree in December.”

That said, issues like the trade war are showing signs that an economic slowdown could be approaching, as evidenced by Apple’s recent announcement of dipped sales as a result of the China tariffs. Additionally, AP noted in the same report that US manufacturing posted a steep decline shortly after the first of the year. Some say the hiring boom and the economic slowdown can’t co-exist for long. However, the fact remains that bakeries are losing workers, regardless of economic conditions. There’s a gap between skilled “dough heads” on the brink of retirement and significantly fewer entries into the workforce, and the gap is now a reality as opposed to the theoretical possibility it once appeared to be. 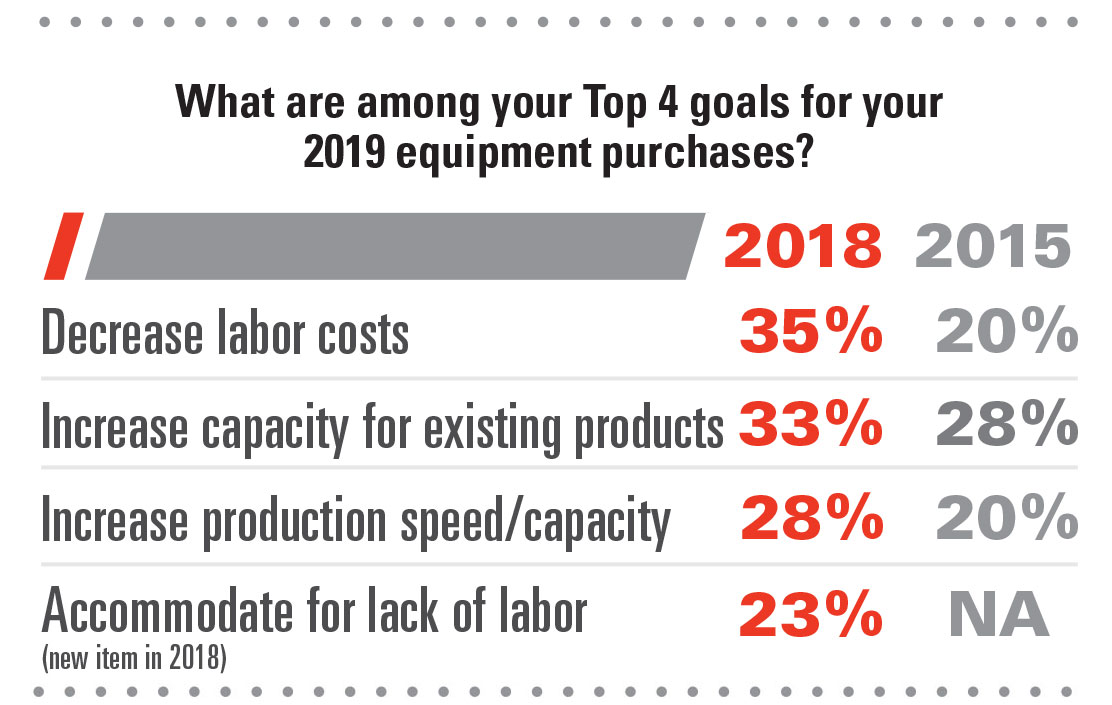 Bakers are scrambling to hire skilled workers, scooping candidates up like contestants in a game show cash-grab. It’s a race to fill the jobs, but when they can’t, they’re making strategic equipment investments as a long-term solution in case the labor pool dwindles even further.

For years, we’ve known that equipment can reduce labor costs. But this year’s survey revealed an interesting — yet perhaps obvious — twist. While 35% of respondents indicated “reduce labor costs,” another 23% cited “accommodate lack of labor” among their Top 3 goals for 2019 equipment investments.

Because the latter was a new item in this year’s survey, it was among the top responses, behind increasing production speed/capacity, increasing capacity for existing products and, of course, decreasing labor costs.

When it comes to making predictions, though, bakers aren’t prone to show their cards. “In previous years, they were playing their capex hand very close to the vest,” Ms. Hellmer observed. “But now, companies with a strong foundation are able to look ahead toward the future. They can look with some confidence and say, ‘Here’s what we’re focusing on for the business, and this is how we can become the company that we need to be in the next five to 10 years.’ ”

A look back over the past decade reveals a lot about US manufacturing, American consumers and the baking industry. It also, of course, speaks volumes about the health of the economy. “This is recovery from the recession,” Ms. Hellmer said. “I think these are the strongest numbers we’ve had so far, and the trend is that we’re hitting our peak. We may slip a little in 2019 and 2020, but not much. We’re still healthy.”