We use cookies to provide you with a better experience. By continuing to browse the site you are agreeing to our use of cookies in accordance with our Cookie Policy.
Home » Time-tested mega trends shaping baking and snack industry’s future

If history teaches us any lesson, it’s that looking back in time puts everyday life into a totally different perspective. Certainly, turning the clock back 52 weeks provides valuable scanning data that takes a snapshot about how baking and snack brands — and the market as a whole — have been performing in the short run. Used skillfully by market researchers, the information may yield guidance for extrapolating the latest cutting-edge trends in the near term.

To visualize the larger picture, however, let’s travel all the way to 2002 before clean label became the rage and the onslaught of the digital age redefined almost everyone’s life.

That’s what Kansas City-based Cypress Research did in its recent analysis of the Economic Census of Manufacturing data that provides the most complete information on the commercial baking industry every five years. Additionally, Cypress Research supplemented its findings with statistics from the Annual Survey of Manufacturers (A.S.M.). The data offers comprehensive information about the entire category, including the value of shipments not only to retail but also to all channels, including food service, co-manufacturing and more.

In addition to framing the state of the industry, the report lays the foundation for identifying those mega trends and underlying factors that have been impacting industry sales and capital expenditures over the long run.

From a macro perspective, lifestyle changes such as the dramatic dollar swing from eating at home to dining out have shifted the industry’s customer base to food service and prepared meals-to-go in grocery and c-store chains. These retailers and others have responded with takeaway foods and in-store meals that supply alternatives to quick-serve and casual dining restaurants, suggested Robb MacKie, president and chief executive officer of the American Bakers Association.

Likewise, the shift toward all-day snacking to replace traditional meals has been going on for decades. However, it has accelerated even more in recent years as established manufacturers and start-up incubators roll out better-for-you offerings that are gaining greater acceptance with today’s consumers, said Elizabeth Avery, president and c.e.o. of SNAC International. 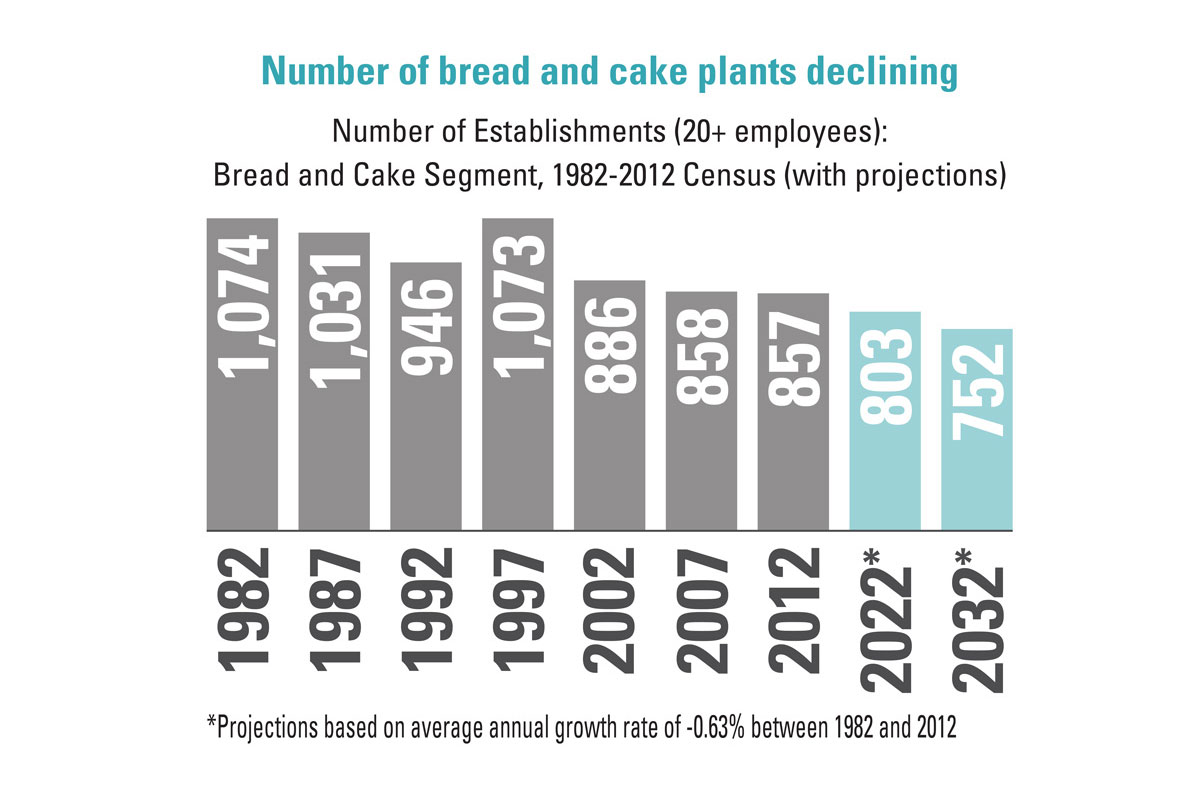 Such lifestyle and retail changes are redefining and restructuring how bakeries operate. From a distribution standpoint, many regional baking companies have installed multi-tiered shipping systems that now allow them to serve national accounts with a combination of fresh and frozen baked foods. From a production perspective, perhaps the greatest transition comes as the industry segues from long-term consolidation to an era of capital reinvestment.

Specifically, significant advances in technology coupled with emerging automation for the digital age are taking efficiency to new levels while addressing food safety concerns and the workforce gap that is transforming the way bakers and snack producers operate, said Dave Van Laar, senior adviser to A.B.A.’s president and c.e.o., and longtime veteran of the cookie and cracker industry.

Gone are the days when bakers complained that equipment hasn’t changed for the past 50 years.

“Before, there was not a lot of innovation, especially when it comes to food safety and labor issues,” Mr. Van Laar acknowledged. “We’ve seen a change in that. We’ve seen it really turning around with a focus on new technology. Our suppliers have done a good job coming to the table with new (systems and equipment) that make sense for us to use.”

And in the grand scheme of things, Mr. MacKie added, that investment reflects the strength of the industry and predicts good news for the future.

“Companies that are successful today have been true to their capex and to steadily reinvesting back to their businesses,” he noted.

In the comprehensive analysis by Cypress Research, certain statistics stand out, including the value of shipments in net sales for the overall commercial baking industry from 2002-16. Shipments rose 18% to $78.7 billion in 2007 from $66.8 billion in 2002 and another 18% to $92.6 billion in 2012 before slowing down in recent years.

Bread and cake accounted for one-third of the value of shipments, followed by 23% for snack foods. The remainder included dry pasta/dough/mixes, cookie/cracker, breakfast cereal, frozen cakes/pies/pastries and tortillas.

“We’ve never been Apple or Google,” Mr. MacKie said. “We’ve always been the steady-Eddie, strong and stable industry, and all of the data show that.” 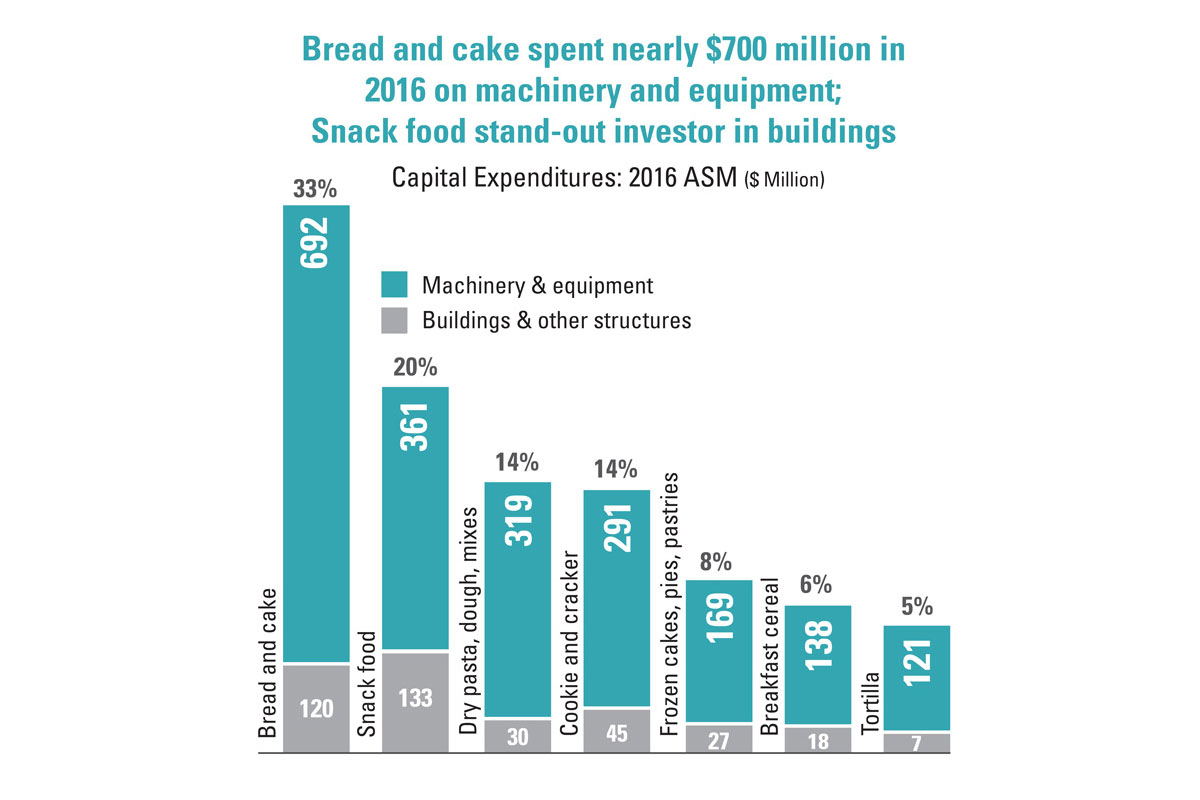 Shipments of bread and cake have risen at modest rates, anywhere from 8% to 9%, in the five-year periods leading to 2007 and 2012, while the cookie/cracker segment trailed at a slower rate, even declining in recent years.

“When you look back 15 years, what you really see is that snacking is a ‘durable growth’ story,” Ms. Avery pointed out. “With limited exceptions, the trends have all been upward. There’s nothing but opportunity for the future of this category.”

As the value of shipments increases in the overall commercial baking industry, the total number of establishments — or production facilities — has remained steady over the years, but they have declined in some key segments, according to census data.

Such declines can be attributed to decades of rampant consolidation starting in the 1980s as major players gobbled up smaller regional ones in what remains a highly diversified baking industry. 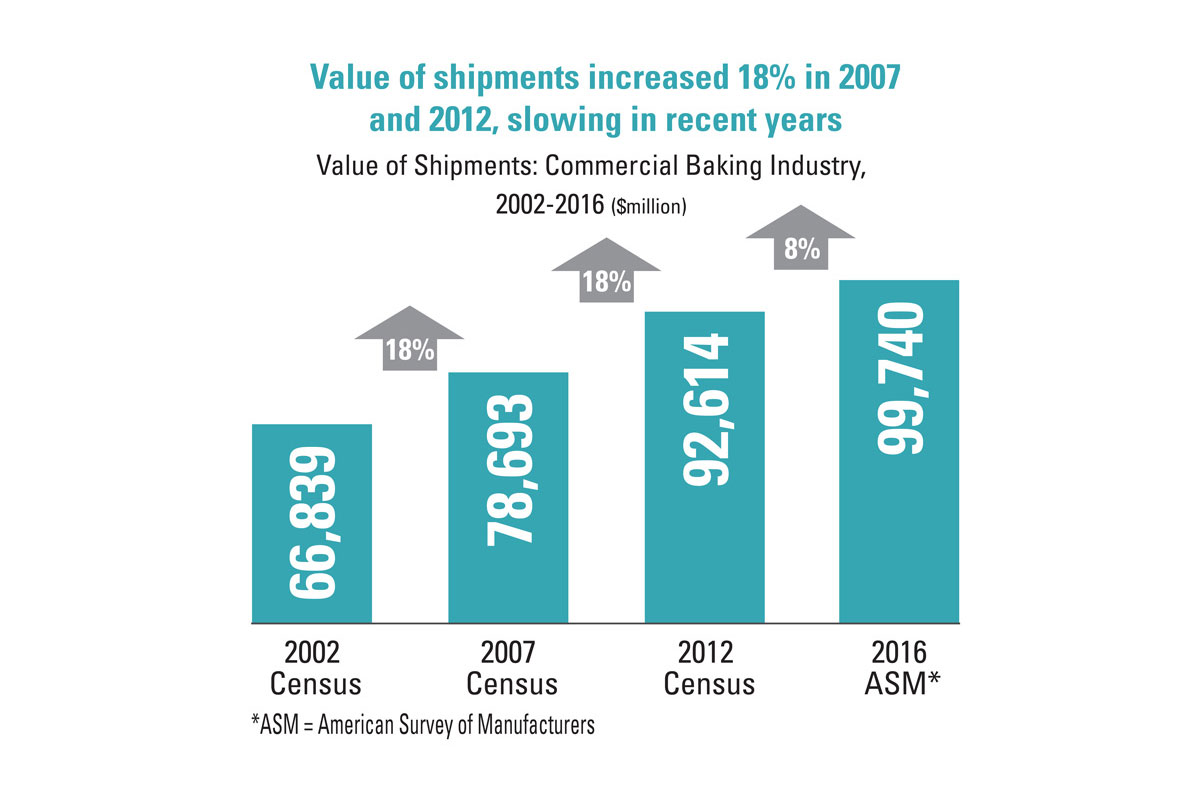 “The change in ownership has been dramatic over the past 10 years, and many of the family businesses are now out of the industry,” Mr. Van Laar observed.

By 2000, the largest entities in the industry began acquiring one another. Multinational companies then began buying U.S. bakeries. Most recently, venture capital and other investment firms started getting into the action in a big way.

“They are the ‘new bank’ for many businesses,” Mr. MacKie said. “And they’re investing in the long run.”

Despite this flurry of fluctuation over the years, the data reflects that one variable remained the same: “The companies have changed, but the capacity hasn’t,” he noted.

That’s because mergers and acquisitions — in many cases — have made companies better operators.

“Part of an acquisition strategy is to gain efficiencies and synergies, and a lot of that comes through investing in automation,” Mr. Van Laar noted. “Smaller companies did not always have the capital to make those improvements.”

Prior to an acquisition, four plants might produce all sandwich cookies. After merging the two operations, often only two more highly automated bakeries are now needed.

“Consolidation was inevitable because of the aging of equipment, and it was ripe for upgrades,” Mr. Van Laar recalled. “Bakers were able to move products around for a better mix in production, and, overall, the industry has made us more efficient.”

This article is an excerpt from the March 2019 issue of Baking & Snack. To read the entire census feature, click here.