The snack company Chirps, co-founded by Lauren D’Asaro, beat out four other finalists in a pitch competition based on the popular television show “Shark Tank.” Celebrity judge Barbara Corcoran was the special guest at the event and highlighted a panel of four other industry judges. Ms. Corcoran, the panel of judges, and the attendees at SNAXPO all chose Chirps as this year’s winner.

Ms. D’Asaro said the money will help her company broaden its distribution into national retailers like Sprouts.“It’s going to go a long way, the $20,000 is going to let us get into another 300 stores,” she said. 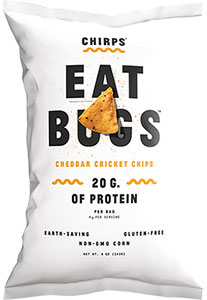 Ms. D’Asaro pitched the nutritional benefits of cricket protein to the judges and attendees. In one serving of Chirps, consumers can get as much protein as an egg white, 25% of their daily vitamin B12, and more calcium and iron than traditional snacks.

Chirps beat out several other companies pitching other forms of healthy and indulgent snacks.

Ms. Corcoran entertained attendees with her personal story of how she turned a $1,000 loan into a multimillion-dollar business and shared stories about her fellow investors on “Shark Tank.”

Attendees were also able to sample each of the snacks that participated in the competition during the exhibition at SNAXPO.

Ms. D’Asaro said the experience of competing at SNAXPO was valuable not only because of the prize money, but also because of the connections she made in the industry.

“If you’re a snack company, I’d suggest applying for next year,” she said. “It’s an amazing experience to get to meet suppliers and talk in front of that many people who are in the industry. Also to get to meet c.e.o.s of other companies and to get their advice, it was a great experience.”