We use cookies to provide you with a better experience. By continuing to browse the site you are agreeing to our use of cookies in accordance with our Cookie Policy.
Skip To Content
Home » Flowers opens doors to ‘History in the Baking’ exhibit

Flowers opens doors to ‘History in the Baking’ exhibit

THOMASVILLE, GA. — Community leaders, company executives and special guests gathered in downtown Thomasville on May 24 to dedicate “History in the Baking,” an interactive exhibit housed in the Flowers Foods Heritage Center. The event was part of Flowers Foods’ celebration of its 100 years in operation.

The Flowers Foods Heritage Center is a 104-year-old building that first opened as a post office, then served as a public library and later was home to several non-profit organizations. Flowers acquired the building in 2015 and undertook a substantial renovation that recently earned an Excellence in Rehabilitation Award from the Georgia Trust for Historic Preservation.

“Our company believes in being a good corporate citizen in the communities where we operate, and that is especially true in our hometown,” said George E. Deese, chairman of Flowers’ board of directors. “Our hope is that our investment in this handsome building, one of Thomasville’s historic landmarks, has put it in shape to last another 100 years.”

The self-guiding exhibit takes visitors through milestones in the company’s 100-year history from a family-owned local bakery to a multi-billion-dollar food company producing a wide range of bakery foods under such brands as Nature’s Own, Wonder, Dave’s Killer Bread and Tastykake. The exhibit also shares a Flowers family timeline, highlights from the local community and the story of the historic post office building in which it is housed.

Ryals McMullian, president and chief executive officer of Flowers, said the exhibit celebrates the company’s legacy of leadership, employees and a belief in the power of working as a team. 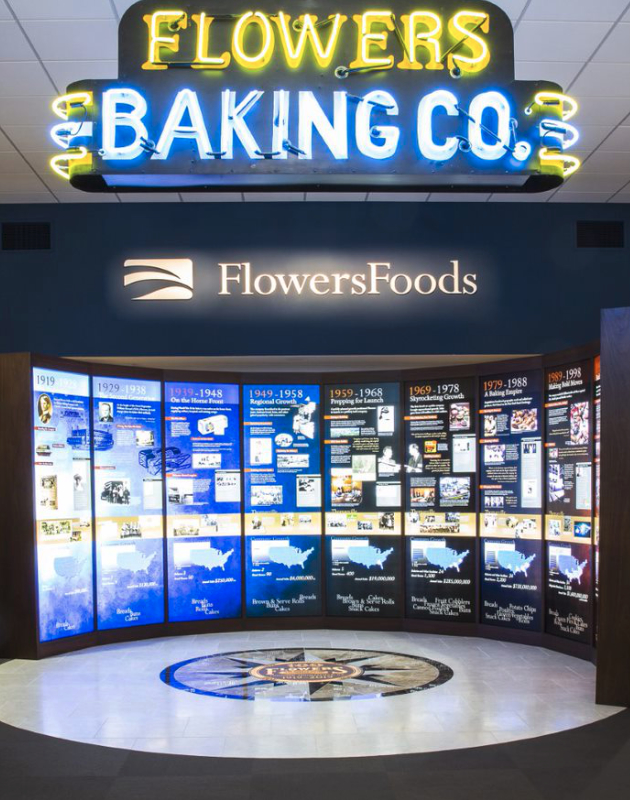 “This exhibit honors our past while marking the beginning of Flowers Foods next 100 years,” Mr. McMullian said. “We know if we stay true to our values of integrity, service, quality and creativity and remain committed to our strategic goals, we will continue to grow and be successful.”

The exhibit features more than 20 displays, including full-sized models of three Flowers employees whose stories represent hundreds of similar stories across the company. John Hester, the company’s first hire, is shown in a tableau of the 1919 bakery. Ike Black, who retired in 1982 after 36 years with Flowers, is shown in a grocery store display along with a fully restored 1946 Dodge bread truck. Mr. Black began as a route salesman, and at the time he retired as bakery president, he had hired and trained more than 50 managers serving in various positions within the company. The third model is of Janice Anderson, who joined the company in 1966 and retired in 2012 as vice-president of marketing. Ms. Anderson’s start as an entry-level clerk who advanced to a position with responsibility for all the company’s brands and marketing efforts reflects the company’s commitment to offer individuals the opportunity to learn new skills and advance, Flowers said.

As part of the May 24 ceremony, Mr. Hester was posthumously awarded the Langdon S. Flowers Spirit Award. The award, which is considered Flowers’ highest honor, is given to those employees who exemplify the Flowers spirit of leadership and community service. Several of Mr. Hester’s family members attended the dedication where his eldest daughter, Annie Hester Walden, and his grandson Willie Frederick were presented with the award. Mr. McMullian and Mr. Frederick, who recently retired from Flowers Baking Co. of Thomasville, officially opened the doors of the exhibit to the public.

Marta Jones Turner, former executive vice-president, served as exhibit project director after retiring from Flowers in 2017. She and her team spent two-and-a-half years researching, designing and building the exhibit. Some of the interactive displays include a selfie photo station with “Little Miss Sunbeam,” a 1920s phone booth that invites visitors to record a story, a hand-crank souvenir coin press and much more.

“We were thrilled to unearth a Flowers Ice Cream Co. tray from 1915, early ads and correspondence for Flowers Baking Co., historic family documents and much more,” Ms. Jones Turner said. “Our team did extensive research on the facts and stories shared in the exhibit.” 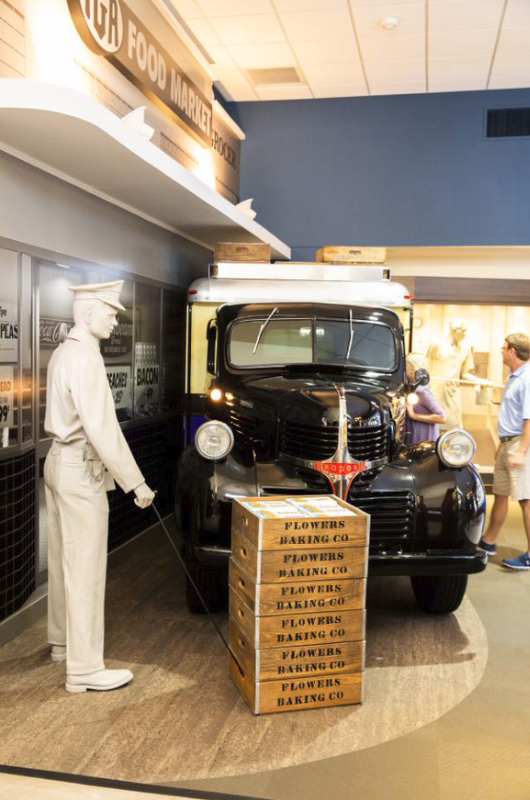 Ms. Jones Turner said the local community, Flowers retirees and employees, and the larger baking community contributed to the exhibit. One example is an actual 1946 bread truck that sits inside the display. Restoration and graphics were donated by Flowers business partners Rush Truck Center, S&B Auto, Drake Signs, Supreme CORP and Admark Graphics.

Additionally, a vintage 1940s Flowers Baking Co. neon sign that hangs over the center of the exhibit and is believed to have hung over the original Flowers bakery in Jacksonville, Fla., was donated by Russell T. Bundy, founder of Bundy Baking Solutions, a longtime supplier to Flowers. Mr. Bundy is an avid collector of baking industry memorabilia and historical artifacts, and the neon sign came from his extensive collection, the majority of which is housed in a museum located at Bundy’s corporate headquarters in Urbana, Ohio.

Mr. Bundy and members of his family visited the exhibit for a private preview on May 14.

“Russ Bundy is passionate about the baking industry,” Mr. Deese said. “I am so pleased that he had the opportunity to visit us here in Thomasville and see this outstanding exhibit.”

History in the Baking is open to the public on Tuesdays, Thursdays, Fridays and the first Saturday of the month from 11 a.m. until 3 p.m. For more information, or to schedule a visit outside of those hours, visit www.flowersfoods.com/company/history/history-exhibit.