Anomalous weather in North America may have peaked in the last days of May, and change is probable during June. That is a simple statement to make because these are unprecedented or nearly unprecedented times. To perpetuate rainfall in the United States as it has been in recent weeks would be an epic event, and quite frankly it would be shocking to see. The United States has had similar bouts of excessive rain in the past, but the most recent two weeks of torrential rainfall has followed a full year of wetter-than-usual conditions. Some areas in the nation’s cropland have had rain far too frequently to get crops planted.

Rain during the last two weeks of May alone produced moisture totals from southern Iowa and parts of western Illinois to Oklahoma that ranged from 6 to nearly 15 inches, which is two to five times the normal amount of rain that falls in a similar two-week period at this time of year. A little farther west in central and western Kansas, rainfall varied from 3 to 8 inches in the same two-week period, which compares to normal precipitation varying from 1.5 to nearly 3 inches.

Atmospheric dynamics in May were very impressive. Cool air was anchored in the northern Plains and Canada’s Prairies while warm and steamy conditions were evolving in the southern U.S. Plains, lower Mississippi River Basin and southeastern states. An extremely strong jet stream then moved between these two air masses sending one storm after another through the middle of the nation, mixing a moisture influx from the Gulf of Mexico with the warm and cold air to induce frequent precipitation of significance. A similar situation occurred in the summer of 1993, which also resulted in significant flooding.

This year’s active weather in the central United States acted a bit like a large vacuum cleaner sucking the moisture out of surrounding areas and depositing it into the Midwest and Great Plains. The dynamics in the central United States were so extreme that rain failed to develop in both Canada and Mexico. Both countries reported well-below average precipitation during May. Some areas experienced drought development. Mexico has experienced its driest spring since 2011, and Canada’s Prairies already were enduring a third year of drought when the U.S. rainfall got carried away, which likely had a further diminishing trend in rainfall potentials for the Prairies.

The U.S. wet weather and flooding rain has affected farm land from the middle two-thirds of the Great Plains through the entire Midwest, a part of the U.S. Delta region and into southeastern Ontario and Quebec, Canada. Flooding has affected all of this land at one time or another, and planting is just as far behind in southeastern Canada as it is in the U.S. Midwest. Both regions need to dry out considerably, but when might that happen? 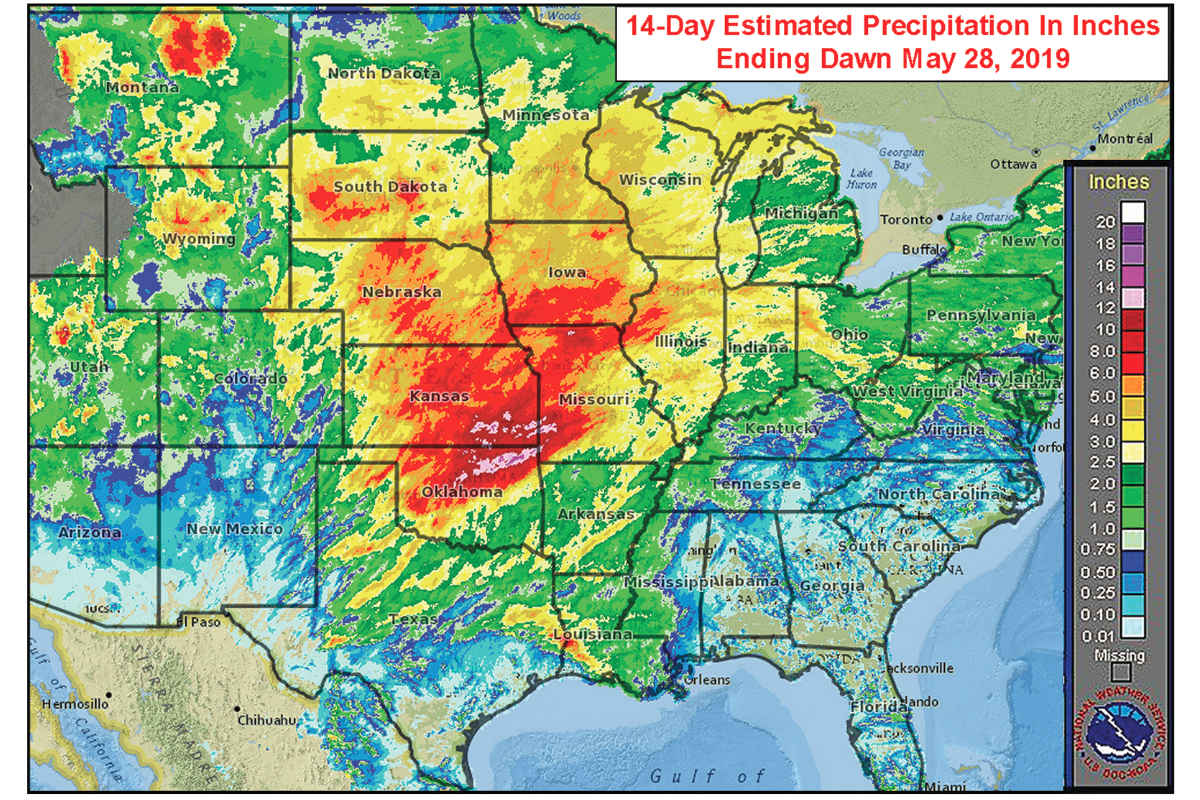 As of May 28, the jet stream was beginning to weaken and the persistent pool of colder-than-usual air in the northwestern Plains and Canada’s Prairies was abating. Reducing the cool air will have an immediate impact on rain intensity, and there likely will be less prolonged, heavy, rainfall in early June because of this factor alone. The slowing of the jet stream will not only reduce the number and intensity of storm systems rolling through the Plains and Midwest, but seasonal warming will begin to evolve more significantly throughout the Great Plains. A developing high-pressure ridge is expected to result from these changes, especially as they perpetuate into the first half of June.

A high-pressure ridge in the middle of North America is quite normal during the late spring and summer, and if weather in North America is ever going to trend more normal there has to be some ridge building in the Great Plains. Normally, the high-pressure ridge begins forming in mid- to late-May and it is at that time of year that the typical wetter biased spring weather begins to abate. The northward shift in the jet stream that usually results because of ridge building in the Plains normally brings seasonal rainfall and warmer temperatures to Canada’s Prairies. Typical early spring weather in Canada tends to include limited precipitation events and cooler biased temperatures. This year’s delay in developing a ridge of high pressure has played a big role in delaying the wet weather biased pattern.

High-pressure ridges in the middle of North America during the late spring and early summer also control Mexico’s weather. The ridge helps to develop the monsoon flow that occurs in Mexico during May through September. Without the ridge, the monsoon flow would be less likely to evolve, and weather in Mexico would be left drier biased for a longer period of time. Mexico does not usually get much rainfall except when the monsoon evolves. Delaying this year’s ridge of high pressure in North America has played a key role in delaying the onset of monsoonal moisture in Mexico.

Today’s slower jet steam, warmer atmosphere and developing high-pressure ridge already has brought greater rainfall to Central America. This week’s outlook for southern and some central Mexico crop areas is inclusive of developing rainfall. World Weather, Inc. believes this evolutionary change in North America weather will continue for the next few weeks, and that should finally diminish much of the rain in the U.S. Midwest greatly, allow warmer days between rain events and support greater rainfall periodically in both Mexico and Canada’s Prairies.

One more byproduct of the wet spring this year likely will be feedback moisture from the ground early this summer. As high pressure begins to develop aloft over the central United States in the next couple of weeks the ground and air will trend warmer. As warming continues evaporation rates will rise and the moisture that was once in and on the ground will begin rising into the air. The heat of each day will send parcels of warm, moist, air upward into the atmosphere from the wetter biased areas and eventually reach into cooler levels of the atmosphere at which time condensation will take place and suddenly clouds will develop and rain will begin falling. The high-pressure ridge will then deteriorate in this environment. Placing a high-pressure ridge over wet ground usually results in a weak ridge, and one that will still allow some showers and thunderstorms to occur while the ridge is in place. As the soil moisture finally gets depleted the ridge will have greater staying power, and if all other atmospheric elements stay unchanged the wet bias will finally lead to a dry bias, but it will be a slow process. That implies that dryness in the heart of the U.S. Corn Belt is not likely to be significant for a few weeks — if it is going to become significant — because of the soil moisture feedback process.