If a consumer looks at a finished baked food and declares it “almost too beautiful to eat,” that just might be the highest of compliments. The truth is that we eat with our eyes, so attractive translates to appetizing. This is ­especially true for iced or glazed products such as cakes, cupcakes and donuts when the right visual appeal is married with taste and texture for the best possible eating experience.

But getting the icing or glaze just right on a commercially produced treat is often the culmination of many factors from formulating to processing and even the surrounding environment. It starts with choosing the right topping for the product — whether that’s formulating it in-house or purchasing it pre-manufactured and ready-to-use (R.-T.-U.) — and understanding the caveats that come with it, especially for certain icings that have limited use time.

“Once formulated compounds and icings degrade, they pass the point of no return,” said Ty Sarajian, owner, Axis Automation. “Once icing goes bad, there’s little you can do to recover from it.”

When processed properly, though, challenging icings that are highly aerated can become down-right silky.

“I tell customers an icing should look like soft-serve ice cream,” said Andy Sigrist, director of special projects, Unifiller. “It should even have that consistency and softness if you pull it up by a spatula.”

Even glazes, whose viscosity are considered easy by comparison, can benefit from having the right equipment. By understanding the challenges that come with icing and glazing, and by matching the equipment to the application, bakers can create products that are easy on the eyes and the palate.

In the thick of it

Viscosity is one of the first factors to consider when properly processing an icing or glaze. Unlike thin, ­almost watery glazes, thicker cream-based and R.-T.-U. ­icings and those that are highly aerated require a bit more attention during automation.

While natural products like whipped cream are great for labels, they can be a little feistier as opposed to manufactured toppings when it comes to consistency and shelf stability, and they can also require some T.L.C. 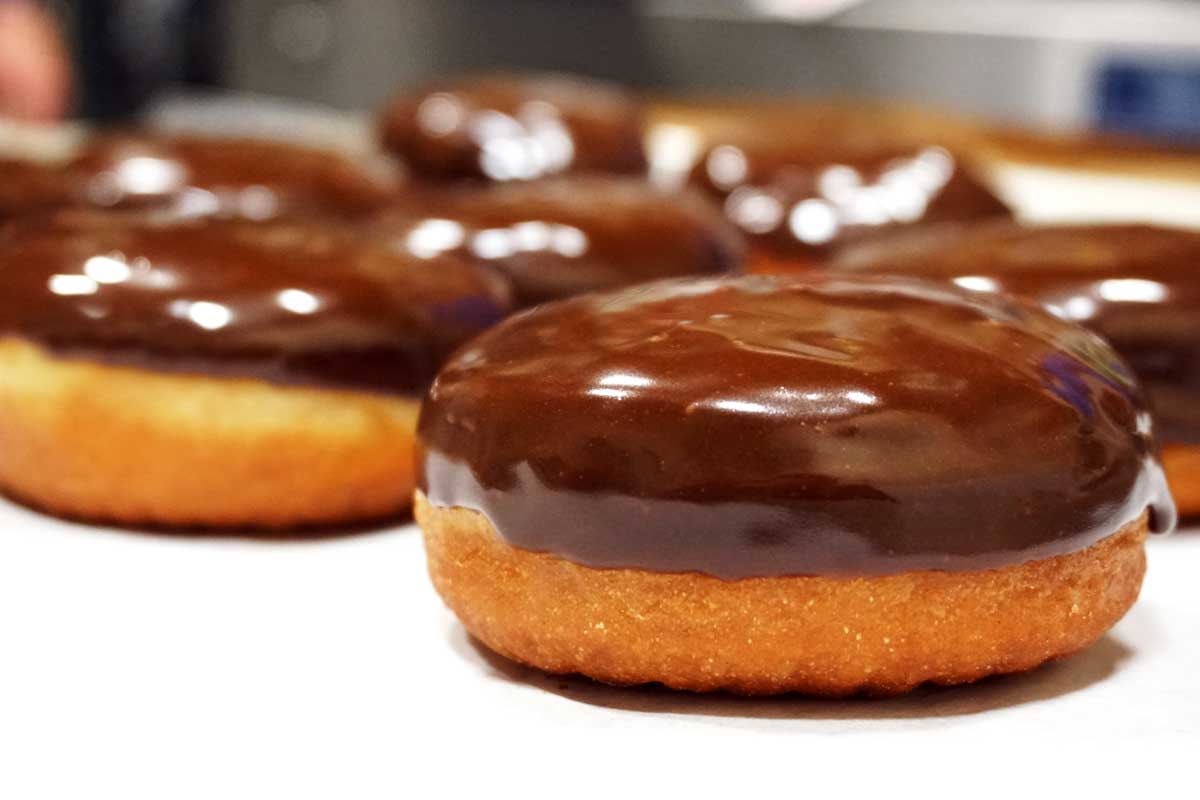 “Whipped toppings generally have a low specific gravity,” Mr. Sigrist observed. “They’re very light and have a lot of air in them, so they tend to be more fragile to work with.”

Specific gravity is something that the baker can control to help with processing in the long run, Mr. Sigrist said.

“The amount of air that bakers incorporate into their toppings or icings is an important factor,” he said. “Being consistent with how much air goes in helps with that smoothness. It creates a smooth icing that you can confidently put on a cake.”

“Through the mixing process, you’re beating some air into the icing,” Mr. Morabito said. “Maintaining that through the pumping application can be difficult. The more you pump or push it through a pipe or nozzle, the more you will lose some of that air, which will reduce the fluffiness. But if you over-aerate it during mixing, the pump will get (the specific gravity) back to where you want it.”

Additionally, because they’re cream-based, whipped toppings have a short window to work with.

“Once they’re mixed and aerated, you can usually only work with them for a relatively short amount of time,” Mr. Sigrist said. “You maybe have about 20 minutes before they become rough or dry, or the composition otherwise changes.”

Manufactured icings like R.-T.-U. provide a lot of benefits for products like half-iced donuts, but they’re also not without challenges.

“These icings tend to be produced with a wide range of viscosities, which can favor the manufacturing process, but it also makes things difficult to control in the process,” Mr. Sarajian observed. “When half-icing donuts, the relative viscosity of the R.-T.-U. plays an important role in the look, coverage and weight of the final product. But without tighter controls on the R.-T.-U., it’s often left to the baker and equipment supplier to solve the consistency issues.”

For example, highly stabilized icings tend to set quickly, which poses a challenge.

“That’s because they want to set up or harden in the machinery,” Mr. Morabito said, noting that some R.-T.-U. icings are great for hand-icing, such as when an operator is dipping a donut and turning it over because the icing sets quickly and smoothly for easy shelf appeal.

That’s not to say this type of icing can’t be used in commercial equipment; it simply means the baker must proceed with caution when processing.

“You have to fight the icing’s ability to firm up and become rock hard because it can become like arterial sclerosis inside the delivery and distribution piping, and a 3-inch pipe will eventually become a 1-inch pipe if that icing hardens inside,” Mr. Morabito cautioned.

Along with viscosity and aeration, temperature is critical for ensuring fluidity, especially for icings that use high-temperature fat in the formulation.

“Maintaining a tight control of the icing temperature will ensure coverage and consistency and a longer production life,” Mr. Sarajian said. “In our experience, jacketing every aspect of the equipment makes a difference.”

Axis Automation offers warming kettles that are triple-walled with an insulation layer to help maintain proper temperature within 1F°.

“Supplying our own onboard custom heaters and proprietary PID loops ensures the icing is brought to the proper temperature as quickly as possible,” he said.

“Heated oil is circulated between the inner and center walls, and with insulation between the center and outer walls, the desired temperature is maintained,” said Lance Aasness, vice-president, Hinds-Bock. “The gentle variable-speed agitator decreases hot and cold spots.”

When it comes to temperature, Mr. Morabito noted that agitation can play a role as well. 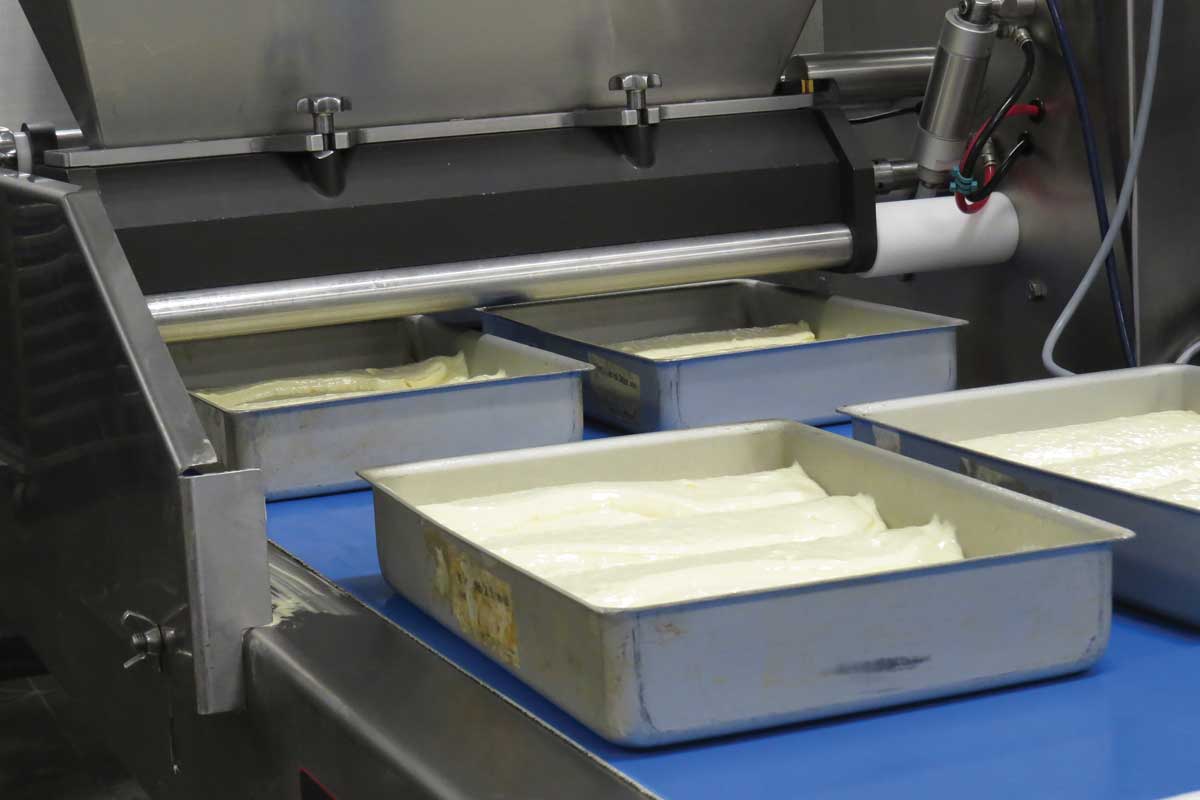 Oftentimes, bakers must understand the temperature of the icing before they can exert control over it, said Bob Peck, vice-president, engineering, E.T. Oakes. To give operators an accurate baseline temperature, the company’s extrusion manifold is equipped to circulate hot water through it for temperature control along with R.-T.-D. sensor probes that come into direct contact with the icing.

“We actually measure the icing temperature and turn the hot water system connected to the manifold on and off to control that temperature,” Mr. Peck explained.

So, for example, if the icing is set to 120°F for optimum fluidity, the water system will automatically turn off when it reaches that number. When the temperature drops below that threshold, the system’s solenoid valve opens to bring the water back in.

Once the temperature will be set at the mixing, blending and holding area, the goal at the applicator is to maintain it. To achieve this, Moline Machinery designs its icers with process controls to ensure the temperature remains consistent as soon as it leaves the holding tank.

“It’s all about maintaining the icing at a consistent application temperature, and that’s a marriage of the applicator, blender and holding tank,” said David Moline, vice-president, sales and marketing, Moline Machinery. At the applicator, Moline’s level controls ensure consistency, which aids in controlling the temperature set in the blending and holding area. For this system, consistency in the blending will naturally lead to consistency throughout, but Moline’s automation will ensure that it’s maintained in each step of the process.

This article is an excerpt from the June 2019 issue of Baking & Snack. To read the entire feature on icing and glazing, click here.