We use cookies to provide you with a better experience. By continuing to browse the site you are agreeing to our use of cookies in accordance with our Cookie Policy.
Skip To Content
Home » Creating icings and glazes that hold up on the shelf

Creating icings and glazes that hold up on the shelf

Icings and glazes are window dressing. Their very presence tells consumers this baked good is an indulgence and draws them in to make the purchase. But runny, sticky or smudged icing tells shoppers that a treat or dessert is going to be messier than it’s worth, and a glaze that’s gone too thin due to high temperatures won’t have enough body and sheen to capture attention, much less make a sale. Gums and stabilizing systems can prevent these and other scenarios from happening and preserve these toppings as the baker intended for longer periods of time.

“Bakers risk losing shelf appeal if they don’t use gums and stabilizers,” said Brent Galasso, West Coast sales, Brolite Products. “People buy with their eyes first, especially when it comes to sweet goods. If the icing or glaze is broken down, weeping, stuck to the packaging, sliding off the cake or the pastry, or bloomed, people may choose a different item to purchase.”

However, there is a wealth of gums and stabilizing systems for bakers to work with, but it can be difficult to choose with a product’s needs and processing and storage restrictions. It’s helpful to understand how gums and stabilizers bring about consistent icings and glazes that hold up on the shelf.

In icing and glaze applications, gums hardly work alone. Formulators usually choose a combination of gums or incorporate them into a part of a larger stabilizer system. Because of the plethora of gums and stabilizers, each brings something different to the formulations.

“Gelling gums such as agar or gellan gum assist with the structure and set of icings and glazes, allowing formulators to customize the eating experience for consumers,” said Anna McKinney, food technologist, TIC Gums. “Galactomannans such as locust bean gum or guar work to increase the viscosity of a glaze, improving cling, flexibility and freeze/thaw stability. Acacia can also be used in combination with gelling and viscosifying gums to assist in film formatting to decrease set time as well as act as an emulsifier in products that contain fat or oil.” 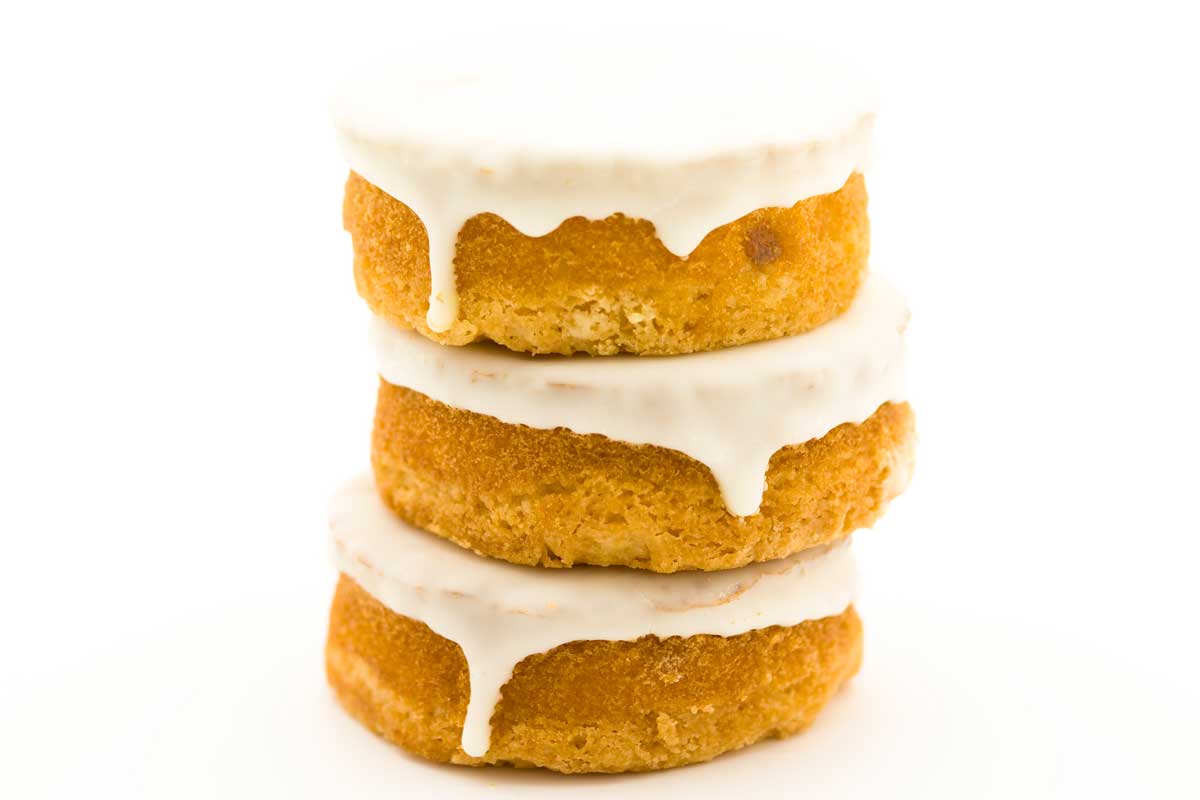 When it comes to icing, agar is a go-to gum that brings a lot of benefits to the formulation. It holds water, prevents brittleness and has a low gelling temperature.

“At the plant, you’re generally applying icing at an elevated temperature, and the fact that agar gels at a lower temperature gives you a bit more time because it’s not setting up right away,” said Matt Gennrich, senior food scientist, Cargill.

Agar is also thermo reversible. This means that at high temperatures, the gum is not very viscous, but as it cools, it thickens up.

“But if you warm the agar up again, it thins out again,” he explained. “When you’re depositing it, that can be helpful.”

While Mr. Gennrich referred to agar as the workhorse of gums, there are others that may be more suitable for different baked goods or processing parameters. Alginates, for example, are cold-soluble. Unlike agar, which must be hydrated at an elevated temperature, alginate doesn’t need to be boiled to become fully hydrated. The gum still holds water at a low usage rate, making it cost-effective.

Many gums work well in combination. Agar, for all its benefits, works well with locust bean gum to improve functionality.

“They do have synergy together,” Mr. Gennrich said. “They help reduce syneresis or watering out.”

Gums can also be a part of stabilizing systems, which include other ingredients such as drying agents and water conditioners, to improve set times and sheen and prevent crystallization.

When choosing gums and stabilizers, the end result should be the first concern.

“Gums will often be added as part of a stabilizer blend, which helps to disperse them,” said Troy Boutte, Ph.D., principal scientist, DuPont Nutrition & Biosciences.

Calcium carbonate or calcium sulfate can speed up set times, which accelerates production and prevents icings from being smudged during packaging. Di-sodium phosphate or sodium hexametaphosphate can be used as buffer and water conditioners. Maltodextrin also is a common ingredient in stabilizer systems for increasing sheen and preventing crystallization.

“Preventing crystallization is key in icing and glazes because these are combinations of dissolved and undissolved sugars,” Mr. Gennrich explained.

The first part of icing or glaze production is warming sugar, water and a stabilizing blend to create a syrup — the dissolved sugar. The second part is adding in an undissolved sugar, typically a powdered sugar.

“In that temperature transition from when you make the syrup to adding the undissolved sugar, if you’re not cooling it down fast enough, you can actually start to dissolve the powdered sugar, which you don’t want because that increases your chances of crystallization,” Mr. Gennrich said. “A stabilizing system can help prevent that.”

Selecting gums and the building blocks of a stabilizing system depends on a lot of factors that bakers need to consider before jumping in.

“Formulators first need to define their objective: days desired, frozen, shelf stable, price,” Mr. Galasso said. “And they need to know their process: cooked or not. Once a clear objective is defined, formulators will be able to narrow in on which choice is best for the product.”

When choosing gums and stabilizers, the end result should be the first concern.

“Consider the desired finished product characteristics to narrow the scope of gum options,” said Marissa Stubbs, bakery account manager, Agropur. “There are many to choose from, so knowing what outcome you’re looking for will help.”

These ingredients can have an impact on texture and color depending on application: crackle-like for a donut, snap-like for a toaster pastry or a light and airy frosting for a cake.

“When it comes to color, some gums will provide more opaqueness to the finished product than others,” Ms. Stubbs said.

Once formulators have the finished product needs in line with gum and stabilizing options, it’s time to turn attention to the processing and storage. 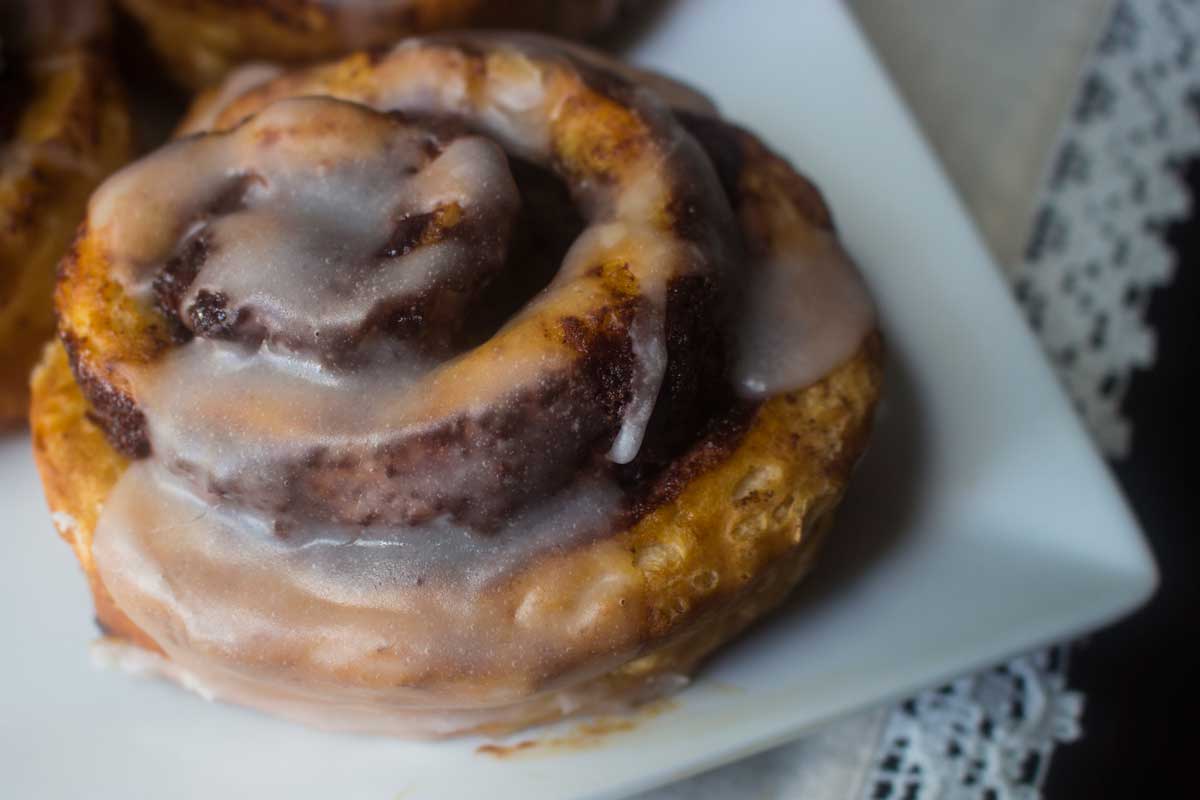 “If you are choosing a gum that needs heat to be effectively hydrated, and you don’t have any heat within the process, it will not allow optimum functionality to be revealed,” said Donna Pechillo, senior scientist, DuPont Nutrition & Biosciences.

Knowing the limitations of manufacturing equipment, specifically the icing depositor or glazer, is also crucial. Here viscosity comes into play, making the icing or glaze flowable through the equipment. With their water-binding abilities, gums and stabilizing systems have a major impact on viscosity, so it’s imperative that formulators understand the viscosity needed to pump and deposit icings and glazes onto finished product and which gum or stabilizing ingredients will reach that.

“Understanding this upfront will lead to at least one less headache down the development process,” Ms. Stubbs said.

Balancing these product and processing needs requires partnering with ingredient suppliers to find the right solutions.

“Making sure you are using the proper gums for your specific application is critical to your success,” Ms. Pechillo said. “Through in-depth discussions with your ingredient suppliers, you can use their expertise to choose the proper gum for the task at hand.”

TIC Gums’ “Gum Gurus” team are hydrocolloid specialists who work with product developers to understand the complexities of formulating or reformulating with these ingredients.

“Our goal is to take the complexity of selecting the right texture and stability system and turn it into something accessible and navigable,” Ms. McKinney said.

Once formulators have direction, trial and error come into play to finalize ingredients and ratios.

“Bakers need to go through research and trials,” Mr. Galasso said. “They need to figure out what doesn’t work so they can decide on what does work best in the products.”

Equipped with the right gums or stabilizing system, icings and glazes can flow through equipment easier, deliver consistent quality, maintain shape through packaging and last longer on the shelf. For an indulgent visual and taste appeal that speaks volumes to the consumer, gums and stabilizers help icings and glazes send a tasty message.

This article is an excerpt from the July 2019 issue of Baking & Snack. To read the entire feature on gums and stabilizers, click here.