We use cookies to provide you with a better experience. By continuing to browse the site you are agreeing to our use of cookies in accordance with our Cookie Policy.
Home » An IBIE history lesson

With the ceremonial cutting of the ribbon to open this year’s show, the 2019 IBIE celebrates a history of innovation, collaboration and education that spans nearly a century. For 99 years to be exact, the largest baking exposition in the Western Hemisphere has taken the industry from the early days of the industrial age that laid the foundation for automation to the current digital era that’s transforming today’s technology a whole new level. Throughout the decades, a steady stream of invention that’s rooted in Old World tradition and inspired by ingenuity has redefined how baked goods are made and go to market on a global scale.

The earliest of days of Baking Expo — what has now become IBIE — spans back to the Roaring Twenties and the post-World War I period of prosperity that introduced the first mechanized proofers and gas-fired ovens. In 1920, just two years after BEMA was formed, the association called the industry together for a national exposition at Atlantic City’s Million Dollar Pier. The inaugural event, which took place during the annual convention of the American Association of the Baking Industry, assembled 125 exhibitors of machinery, packaging and ingredients and featured fully equipped bakeries operating right on the show floor.

BEMA officers decided that the triumph of this event warranted another exposition two years later, Sept. 11-16, 1922, on Chicago’s Municipal Pier.

The Great Depression took its toll, however, during the 1930s. A show tentatively set for 1935 was called off by BEMA, citing financial uncertainties. Baking Expo was next held in 1936. World War II then intervened, and wartime reallocation of essential raw materials, metals and manpower prompted the cancellation of Baking Expo ’46.

Birth of the modern era

Fast forward to 1949. Thirteen years had passed since the previous Expo. After weathering economic difficulties and wartime privations, bakers were ready for change. They got it at the first baking show to be jointly sponsored on a regular basis by BEMA and the American Bakers Association (A.B.A.).

Baking Expo 1949 marked the first such assembly in the modern era and was hailed as a wildly successful event. Organizers promptly set the next one for 1955, and the show settled into a six-year cycle of events at Atlantic City and other venues. The pattern held steady for the 1961, 1967 and 1973 expositions. 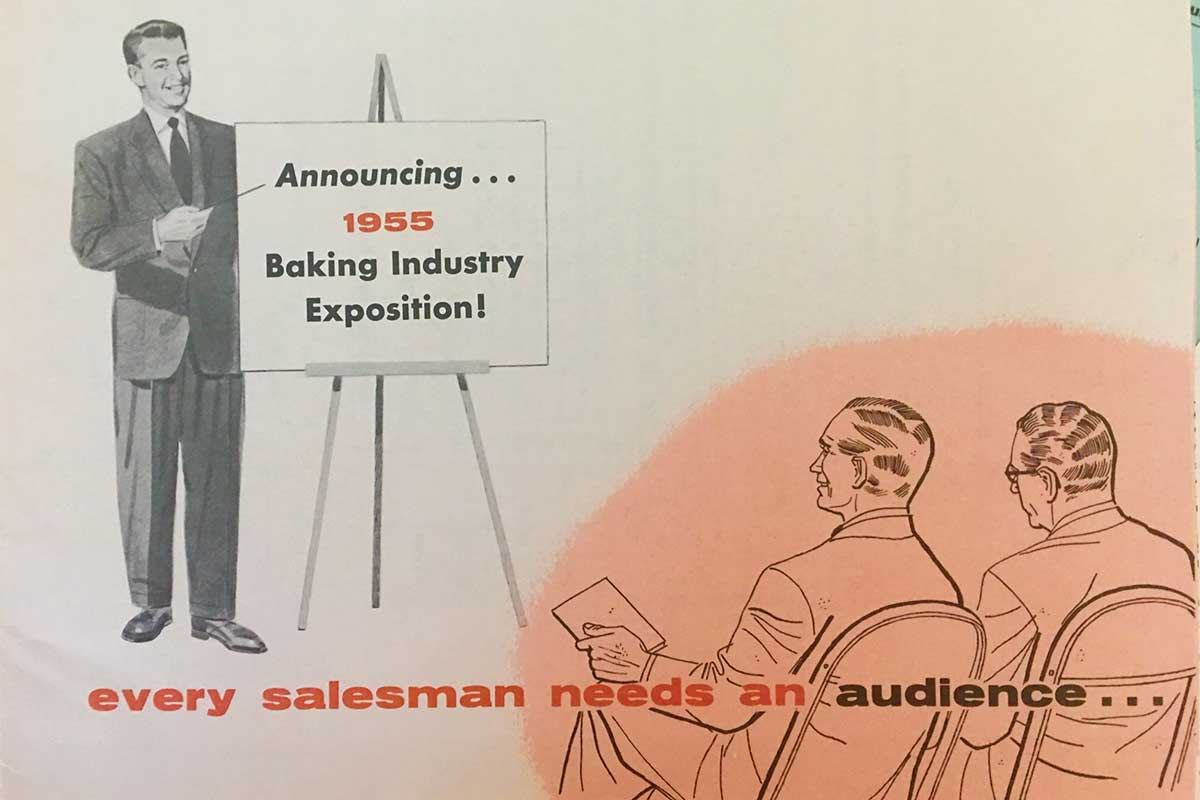 During this period, the baking industry saw the emergence of continuous mixing for bread and cakes, automatic scales and mixers, bulk flour handling, mobile bakeries for U.S. Army use, the birth of the brown ’n serve process and rack ovens — just to name a few. In the 1960s came the development of high-speed English muffin lines, frozen dough bake-off technology and spiral conveyors for proofing, cooling and freezing. Among the major advances in technology during the 1970s were pneumatic pre-batching of ingredients, satellite-style, multi-roller laminators and vacuum cooling for par-baked bread.

To better accommodate the accelerating pace of technological change, the A.B.A. and BEMA shortened the interval to every four years starting with the 1977 event. But they had even bigger ambitions in mind; they decided to move the 1981 Baking Expo to Las Vegas. Although some thought this a risky choice, the new venue proved well worth the gamble.

The timetable held to four years apart for the next five shows: 1985, 1989, 1993, 1997 and 2001. That period saw the rise of the information age and the introduction of full bakery computer-integrated manufacturing, touch-screen equipment controls and computerized master batching systems.

To herald the new millennium, show organizers officially changed the event’s name to the International Baking Industry Exposition for the 2001 gathering. However, the new century brought new challenges. Despite all the new technology at the 2001 show, its biggest development did not take place on the exhibition floor. Instead, national crisis brought IBIE to a standstill on Tuesday, Sept. 11, 2001, a day that nobody will ever forget. 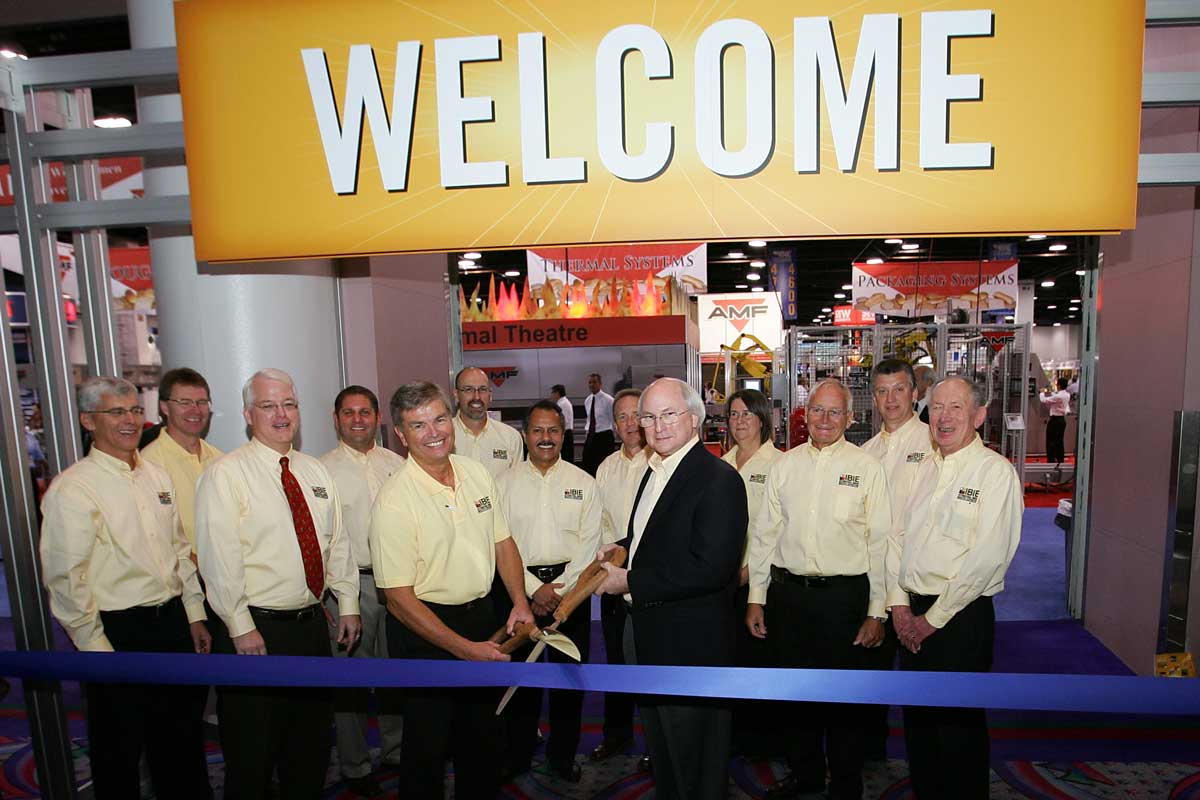 As details of the largest attack on American soil rapidly unfolded, the IBIE committee shut down the meeting when city authorities evacuated Las Vegas Convention Center 90 minutes before the show was to open. The 9/11 attacks forced a three-day shutdown of air travel worldwide, stranding 22,000 IBIE attendees and exhibitors in Las Vegas, while an estimated 2,500 others who planned to come missed the show entirely.

When IBIE reopened for those who remained in Las Vegas, show managers extended hours for its remaining days. The historic day changed the country, and IBIE was about to change as well.

IBIE’s four-year schedule often led to overlaps with bakery shows in Europe, notably iba in Germany. The A.B.A. and BEMA reorganized their event to dovetail with that three-year pattern and set the next date for 2004.

With the move to Las Vegas came increasing demand for more program content. Over the years, industry associations, including the Tortilla Industry Association (T.I.A.) and the Independent Bakers Association (I.B.A.), scheduled their fall meetings to coincide with the burgeoning exposition, but attendees wanted more. Specifically, they requested educational offerings open to the whole trade. In 2004, they got a series of “hot topic” seminars conducted by AIB International.

When the Las Vegas Convention Center could not accommodate the fall 2007 dates and space required by IBIE, the joint BEMA-A.B.A. management committee selected the Orange County Convention Center in Orlando, Fla., where the Grain Foods Foundation revealed its communication program focused on functional benefits of grains in the diet. 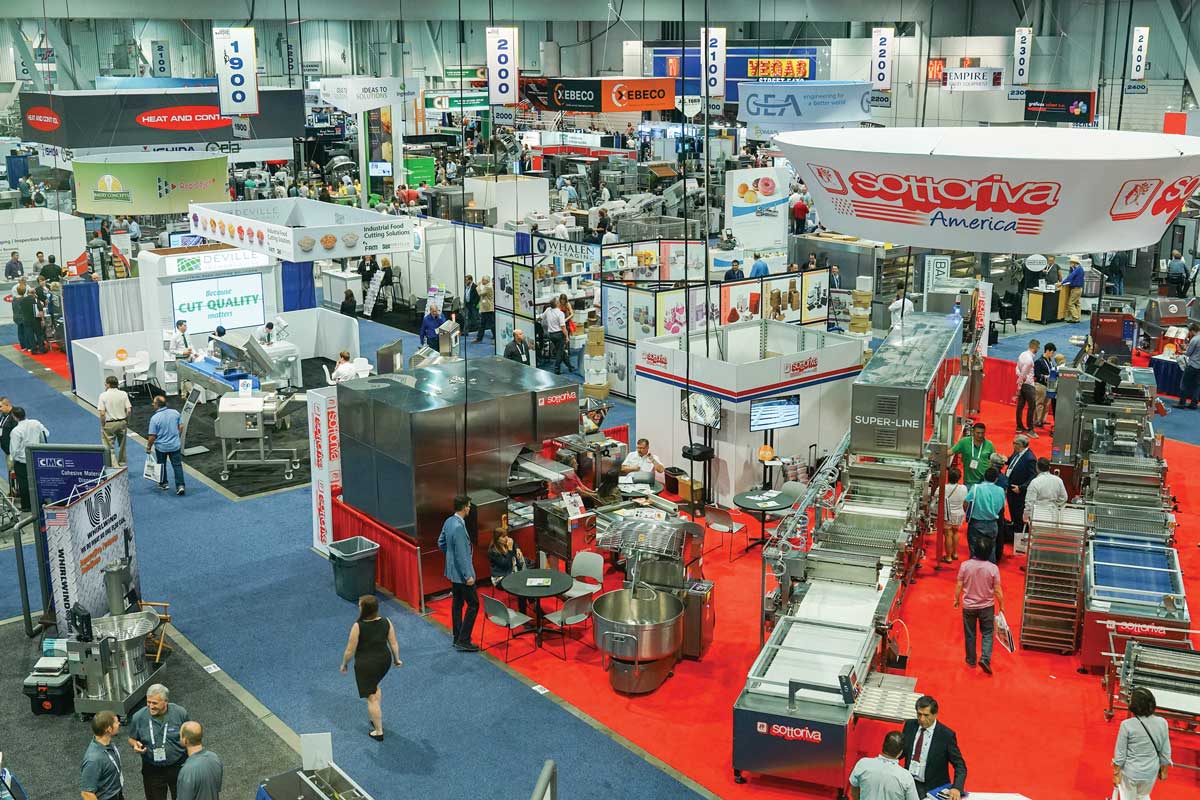 The year 2010 brought IBIE back to Las Vegas for a blockbuster event that covered a half-million square feet of exhibit space. BEMA and the A.B.A. welcomed the R.B.A. as a new partner for the event.

IBIE grew even larger. In 2013, it boasted 815 exhibitors (13% more than in 2010) that took up 19% more square footage in the Las Vegas Convention Center. Attendance surged, as well, to an estimated 21,000 baking professionals. Exhibitors highlighted energy conservation, sanitary systems and food safety as well as growing consumer interest in organic and healthy foods. IBIE also introduced the Innovation Showcase, organized by Sosland Publishing Company.

Exhibitors brought in food celebrities such as the “Cake Boss” Buddy Valastro to lead in-booth demonstrations, and the American Pie Council provided a pie buffet. The PQM Pizza Village showed machinery and demonstrated the latest pizza production techniques. Plus, the 2013 show added a mobile app for smartphone users.

The 2016 gathering again set new records for exhibition space (700,000 square feet, up 28% from 2013), exhibitors (more than 1,000 with 340 new to the show) and visitors (a 9% increase over the previous IBIE). The Innovation Showcase more than doubled in number of participants. The first All-American Tailgate Party gave attendees additional networking time on opening day. One exhibitor pioneered with a virtual reality tour of an operating bakery. That’s something many bakers will see in full force at the upcoming show, which runs Sept. 7-11 in Las Vegas.

IBIE 2019 is focusing heavily on education. The IBIEducate program and BEMA-U will highlight the many opportunities to be included at upcoming shows.

IBIE has long benefited from the International Buyers program, a function of the U.S. Department of Commerce. IBIE anticipates exhibitors and attendees from more than 100 countries at future shows, accounting for more than 30% of total attendance. That number is expected to grow in the future as IBIE launched international promotion efforts in 2018.

Without exception, each Baking Expo — and IBIE — exceeded the previous one in exhibitor participation and variety, in enriched educational opportunities and attendance from the United States and abroad. Looking forward, the future is bright for IBIE as the industry continues its history of innovation for the next 100 years.

Editor’s Note: Laurie Gorton, former executive editor of Baking & Snack, contributed to this report. Ms. Gorton retired from the magazine in 2017.
IBIE
Subscribe to Our Magazines