We use cookies to provide you with a better experience. By continuing to browse the site you are agreeing to our use of cookies in accordance with our Cookie Policy.
Skip To Content
Home » How bakeries can align retail and e-commerce sales strategies

How bakeries can align retail and e-commerce sales strategies

Market research experts agree that baking and snack companies shouldn’t think of e-commerce as an unknown realm that follows its own marketing, loyalty and sales rules. Instead, they should treat it as just another channel in their overall marketing strategy. Many of the same rules apply, and with some creative thinking, companies can ride the momentum of growth.

“In this world, it’s less about what you own and more about where you build your brand presence,” Mr. Gagliardi said.

Creating a strategy that simultaneously supports brick-and-mortar retail and e-commerce is a winning strategy in today’s digital world.

Within e-commerce, there are two channels food companies should be aware of. The pure-play channel includes Amazon and other sites where consumers can buy goods directly through a third-party seller. The omnichannel is different in that the seller is an online and in-store retailer like Walmart or Target. Each channel is growing in different ways, and Mr. Gagliardi said bakers and snack makers need to be aware of each.

So, how can brands stay in front of consumers?

“The online space is driven by search algorithms and creating lists,” Mr. Gagliardi said. “When you win, you’re improving a search algorithm. When you get on a list, you’re driving your sales.” 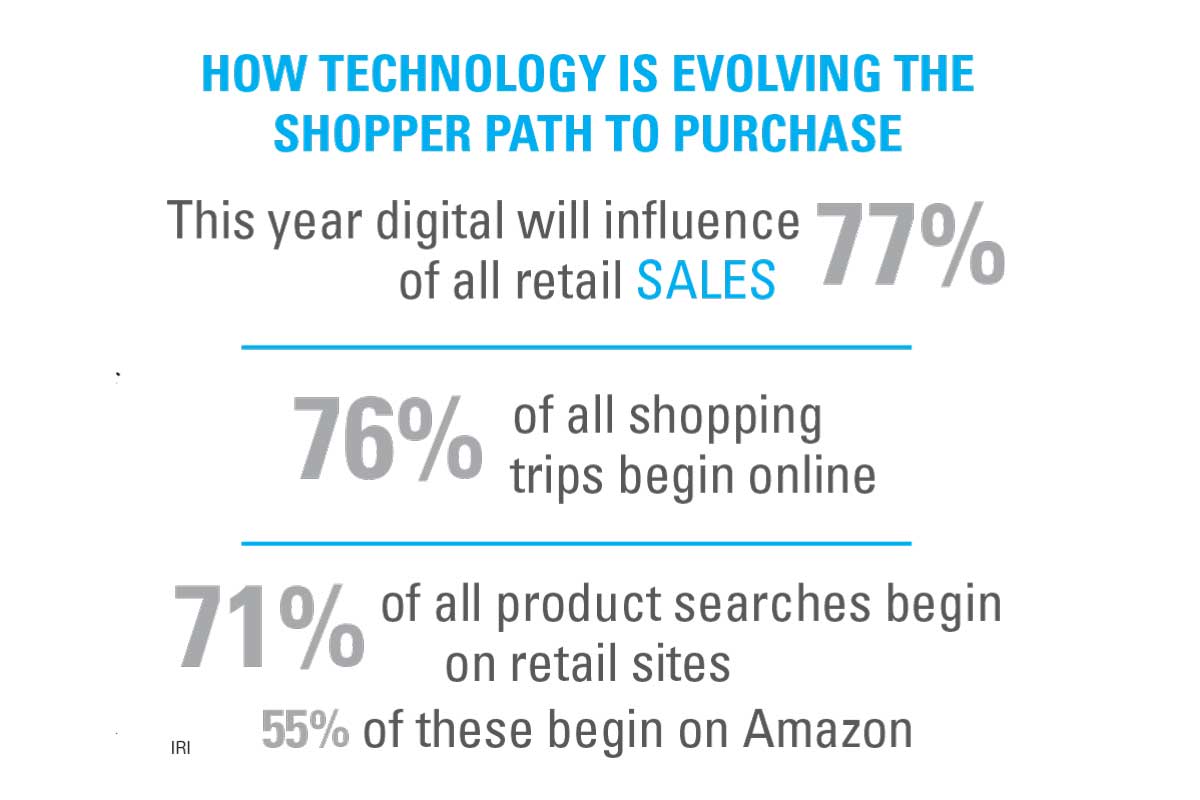 In the world of algorithms, companies need to search out and target online shoppers, then serve them specific media that builds awareness and loyalty.

“It’s all about traffic, something Amazon knows, and that’s why it got into food retail,” Mr. Gagliardi said.

In 2017, Amazon purchased Whole Foods, Austin, Texas, to create a physical presence in food retail. In early 2017, NPD Group reported that just 6% of U.S. consumers shopped online for groceries. By June 2018, that number grew to 16%, or more than 52 million people. Those consumers were using either delivery or click-and-collect models. The growth of click-and-collect and speedy delivery options launched by Amazon and other major grocery chains expanded the appeal of online shopping to the broader population, said Darren Seifer, food and beverage industry analyst, NPD Group.

“This past year has been a game of one upmanship among the major grocery chains,” Mr. Seifer said.

According to Nielsen data, key retail players like Walmart, Kroger and Target have grown their online customer base by at least 90% more than Amazon over the past two years. But, because of Amazon’s appeal as a pure-play option and its wide reach, it has 10 times more buyer reach than any of the other merchants.

The advantages and disadvantages of pure play vs. omnichannel are still being explored. To succeed in e-commerce, brands should have strategies for both.

Nielsen estimates that since 2017, the share of click-and-collect sales grew from 4% to 11% for all C.P.G. e-commerce sales. The grocery and gourmet food sectors have a compound annual growth rate of nearly 50% over the past three years, according to Nielsen. That growth is being fed by the increasing availability and convenience of click-and-collect models and omnichannel experiences.

According to I.R.I., only 4% of omnichannel sales for snacks occur online. However, there is 35% growth in the category. And that’s despite 98% of all C.P.G. snack purchases occur in brick-and-mortar stores. Mr. Gagliardi said this is because consumers are still tied to that in-store model, even if they are now making purchasing decisions online first.

"It’s all about traffic, something Amazon knows, and that’s why it got into food retail.”

Mr. Gagliardi said it’s imperative for brands and retailers to create a seamless experience between online channels and in-store experiences because both feed each other. A positive in-store experience can lead to an online delivery purchase through a local grocery retailer, which then can be renewed automatically, thus driving sales.

With most major brick-and-mortar grocery stores announcing click-and-collect and various delivery options, Mr. Seifer said the line between physical and online shopping is blurring, and as a result, consumers are getting the best of both worlds.

“There is also a place for pure-play e-commerce groceries, but it looks like, as of now, consumers want a seamless experience between brick-and-mortar and e-commerce,” he concluded.

Bakery and snack foods still have a lot of room to grow online. According to Innova Market Insights, for the United States, just 1.9% of survey respondents in 2018 said they purchased baked foods online. That’s compared with 80% who said they still purchase these goods at mass retailers.

So, how can bakers and snack manufacturers create the growth they seek online? Mr. Gagliardi said brands should follow a “build, drive, earn” strategy.

First, build an online presence. Today’s shoppers often refill their baskets or carts with the snacks and foods they purchased the previous week. Mr. Gagliardi said it’s imperative to become their first choice. Next, he said companies need to drive consumers to their products by shortening the path to purchase. Companies should build their organic and paid search terms and work with e-retailers to create a retargeting strategy that branches into social media and other online channels.

Finally, food companies need to earn the awareness, consideration and loyalty of their consumers.

“You have to explore and find your best sweet spot for winning online,” Mr. Gagliardi said.