We use cookies to provide you with a better experience. By continuing to browse the site you are agreeing to our use of cookies in accordance with our Cookie Policy.
Home » Grain-based foods checkoff program taking shape

Of considerable concern on the eve of the 2019 IBIE have been persistently and increasingly weak trends in the demand for grain-based foods. A counterforce to worries about sluggish baked foods sales has been steadily building excitement over the prospective launch of an industry checkoff program. In addition to an IBIE year, 2019 appears to be shaping up as the year of the breadbasket checkoff.

In late spring, a steering committee of millers and bakers was finalizing documents to be submitted to the U.S. Department of Agriculture. After review by the department, the details of the proposed program will be published for a 60-day public comment period. Subject to the comments and possible changes to the program, the U.S.D.A. will determine whether the program should be launched for what is planned to be a three-year trial period, ahead of an industry referendum.

The idea of exploring a potential checkoff program for grain-based foods dates back many years. Interest emerged in 2013 when interviews were conducted with stakeholders in the industry to gauge their feedback of how well the Grain Foods Foundation (G.F.F.), with an annual budget of less than $3 million, was progressing in the pursuit of its mission. The interviews were conducted by Statler Nagle L.L.C. Jean Statler, a founder of Statler Nagle, had been part of Wirthlin Associates in the early 2000s, and in that capacity conducted values research toward what became G.F.F. More recently, Tom Nagle, a managing partner of Statler Nagle, conducted 55 interviews in 2016 across about 35 companies. Interest in a checkoff was expressed in 2013 and intensified in 2016.

Funded by industry, checkoff programs are designed to expand market share and increase revenue. The programs are overseen by the U.S.D.A., as authorized by Congress, and once approved, require industry-wide contributions for activities aimed at promoting that industry. 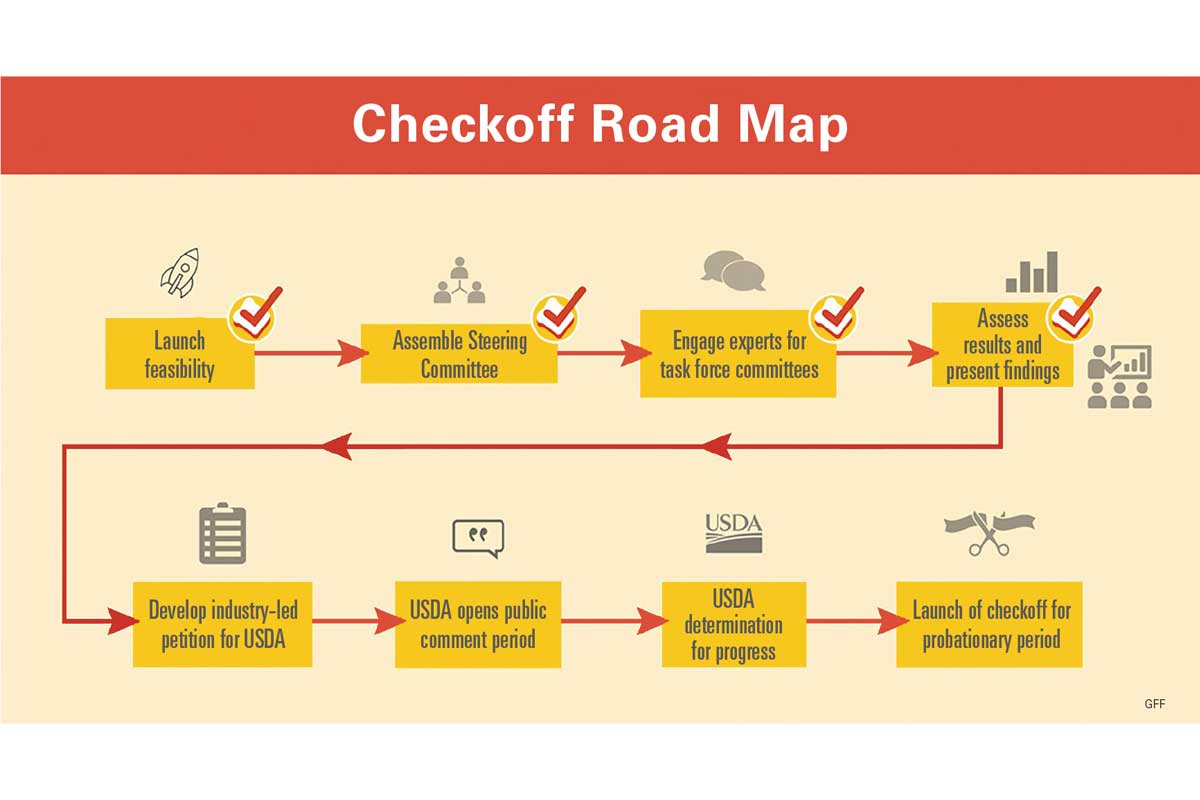 At the annual meeting of the American Bakers Association (A.B.A.), Christine Cochran, G.F.F. executive director, said a checkoff program was identified as a way to tackle a “challenge that would otherwise go unaddressed by any individual company.”

“We wanted to change the perception of bread to increase unit sales, and we wanted to produce scientific research that would support the category as a whole,” she said.

“Why (a checkoff program)?” she asked. “It’s a mandatory program that allows the industry to address a shared problem at scale.”

As agreed upon by the steering committee, an annual budget of $15 million is planned for the checkoff program, of which 85% will be paid by bakers and 15% by millers. To raise the necessary funds, 16¢ per hundredweight of wheat flour used to bake breadbasket products will be paid into the program. Bakers will collect the millers’ contributions.

Breadbasket products are defined under the proposal as fresh and frozen sliced bread and unsliced bread, rolls, buns, bagels, naan, pita and other flatbread, English muffins, and biscuits.

In industry-wide discussions about the program, the threshold for inclusion emerged as a point of concern.

“The vision was to rally a focused group of bakers and millers,” Ms. Cochran said. “We defined that as about 80% of the market. We weren’t quite sure what that was going to be, but we thought that was the right band.”

For their spend on the checkoff program, millers and bakers should expect a return on investment of between 5 and 15 times, Ms. Cochran said.

“The more mature the program is, the lower that number tends to be,” she said. “The dairy program tends to be about $5 (per dollar invested). The younger programs tend to be higher. Somewhere in there is where we expect our return to be based on historical averages.”

As an example of a successful checkoff initiative, Ms. Cochran cited the mustache campaign of the milk program or the “It’s what’s for dinner” campaign of the beef program.

Bumps in the road

Checkoff programs for other industries are not without controversy, and questions have been raised about aspects of the breadbasket program. In a townhall discussion during the A.B.A. convention, the mandatory aspect of the checkoff program did not sit well with Lawrence Marcucci, chief executive officer of Alpha Baking Co., Chicago.

“It appears that the industry is moving down this road,” he said during the townhall. “I’m kind of wondering how if I don’t necessarily agree with this and how it should be done, how do we say, ‘I’m not interested in that?’ Do I get dragged along? How do we say, ‘I don’t think that’s a good idea. I don’t want to do it.’ ”

The program will be subject to periodic referenda.

“We’ve been in the huddle for quite a few years, trying to figure out what is the right message from a consumer standpoint."

A number of bakers and millers spoke supportively of the program, including Allen Shiver, a past G.F.F. chairman and the recently retired president and c.e.o. of Flowers Foods, Inc., Thomasville, Ga.

“I remember a football coach in high school would say, ‘It’s time to break the huddle and run the play,’” Mr. Shiver said during the townhall. “We’ve been in the huddle for quite a few years, trying to figure out what is the right message from a consumer standpoint. Now, you can pull any I.R.I. numbers on our category, pick any time period you want, and see each category continues to trend down 7%, 8%, even more than that in some markets. We have such a great story to tell. Now is the time to get that message out.”

A few weeks later, insights into the shape a breadbasket checkoff program may take were offered by Mr. Nagle. He spoke in mid-May in an online townhall meeting about different elements likely to be incorporated any program ultimately launched.

A consumer-facing integrated marketing and communications program is what Mr. Nagle said is most generally associated with a checkoff program, and such a campaign with a broad message about breadbasket products is likely to be incorporated, he said.

A conversation about nutrition

Underpinning such a campaign and nearly all the checkoff messaging will be food science and nutrition research, Mr. Nagle said.

“This is important for any major food category program because it informs and drives a lot of important things that contribute to success,” he said. “It informs a national conversation about food and nutrition among opinion leaders and policy makers and all the people who shape the food and nutrition wisdom in the country.”

Also important is to provide science-based information to the retail nutrition community, which Mr. Nagle said is trying constantly to meet consumer needs around nutrition.

“When you go down the bread aisle in the grocery store today, you see a lot of science- and nutrition-based claims, or at least they purport to be science- and nutrition-based,” Mr. Nagle said. “A lot of the best-practice programs have engaged the retail nutrition community. There are a lot of nutritionists who work for retailers who are really good targets for these sorts of programs. Food science and nutrition research also informs the food service institutional feeding channel of the business, in terms of menu and product development and also their own marketing. In both channels, retail and food service, you see the consumer facing, they typically will be pleased to see the industry promoting its overall set of products to the consumer. They want the consumer to want your products.” 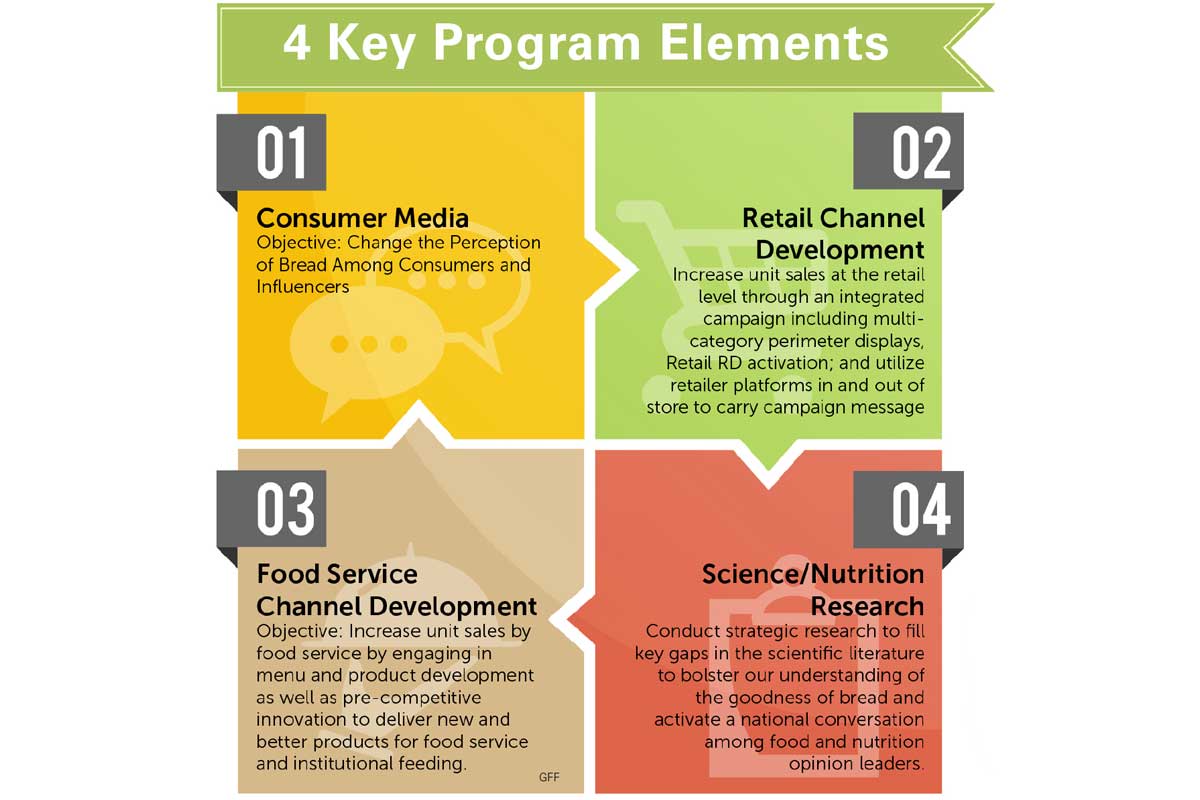 Understanding the importance of such interactions with nutritionists at food retailers and food service institutions requires realistic expectations for what a consumer-facing campaign alone will accomplish, Mr. Nagle said.

“I’ll bring up the ‘Got Milk’ fallacy,” he said. “I feel OK saying that since I spent 10 years on that program. [The fallacy is that] if you just run great ads and P.R., everything will go better, and sales will go through the roof. Even the milk folks didn’t experience that. In order to really drive bottom-line outcomes, you have to have a powerful consumer-facing message like ‘Got Milk,’ but you also need ways to drive your marketing program into the channels and get traction there.

“Some of the best programs are involved with menu and product development in the food service channels, showing people how their products contribute to better consumer-facing products and better outcomes with their customers. The dairy folks in Chicago have full-time staff at McDonald’s,” Mr. Nagle said. “They’ve had some of the best success in getting big food service players to think about their commodity group in more aggressive ways in terms of product development. And also reaching out to that retail nutrition community.”

To change attitudes, the objective is not to silence naysayers, Mr. Nagle said. Instead, the goal is to have a louder voice in public discourse. He said public discussion about milk was about 70% negative when the sector launched its public relations and advertising campaign. Five years later, discussion was 80% positive.

“Did that happen because they made all the activists go away and shut up?” he said. “No, it happened because the industry showed up and poured positive messaging through P.R. and a variety of other messaging into the public sphere. So, by the time they were done, the industry share of voice was just a lot bigger than the activists and the haters. They will never go away. Making them go away is not the goal. Making them irrelevant is the right goal and absolutely achievable.”

Having conducted research across the research and food service channels, Mr. Nagle said customers will be receptive to a campaign from the baking industry. Retailers perceive bread and grains as critically important and see opportunities to leverage fresh and local, tapping into the importance of sandwiches.

“They want a vision and elevated position for grain foods,” Mr. Nagle said. “They say things for which the answer is the program that you all are considering. They are focused on category leadership with a focus on invigorating sales. They are willing to experiment. They want innovation.”