Aeration is critical to cakes. Developed in the mixer, air bubbles in the batter provide much of the cake’s structure and volume. Aeration impacts a cake’s ability to rise in the pan.

“Without proper aeration, the product will not bake properly, greatly reducing the quality of its appearance and mouthfeel,” said Rod Gregg, executive vice-president, Hinds-Bock.

These precious air bubbles, however, can be knocked out of the batter by any turbulence that often occurs as the cake batter leaves the mixer and moves to other parts in the commercial cake process. Such a thorough understanding of how turbulence affects aeration has resulted in the creation of pumps and depositors that can protect the aeration so diligently created at the start.

The purpose of the mixing process for batters is to obtain a given density, which depends on the type of finished product being produced, said Terry Bartsch, president, VMI North America.

“The density varies according to the volume of air incorporated in the batter or in the dough,” he said. “For example, the density is higher for a muffin batter than for a chocolate mousse or a sponge cake.” 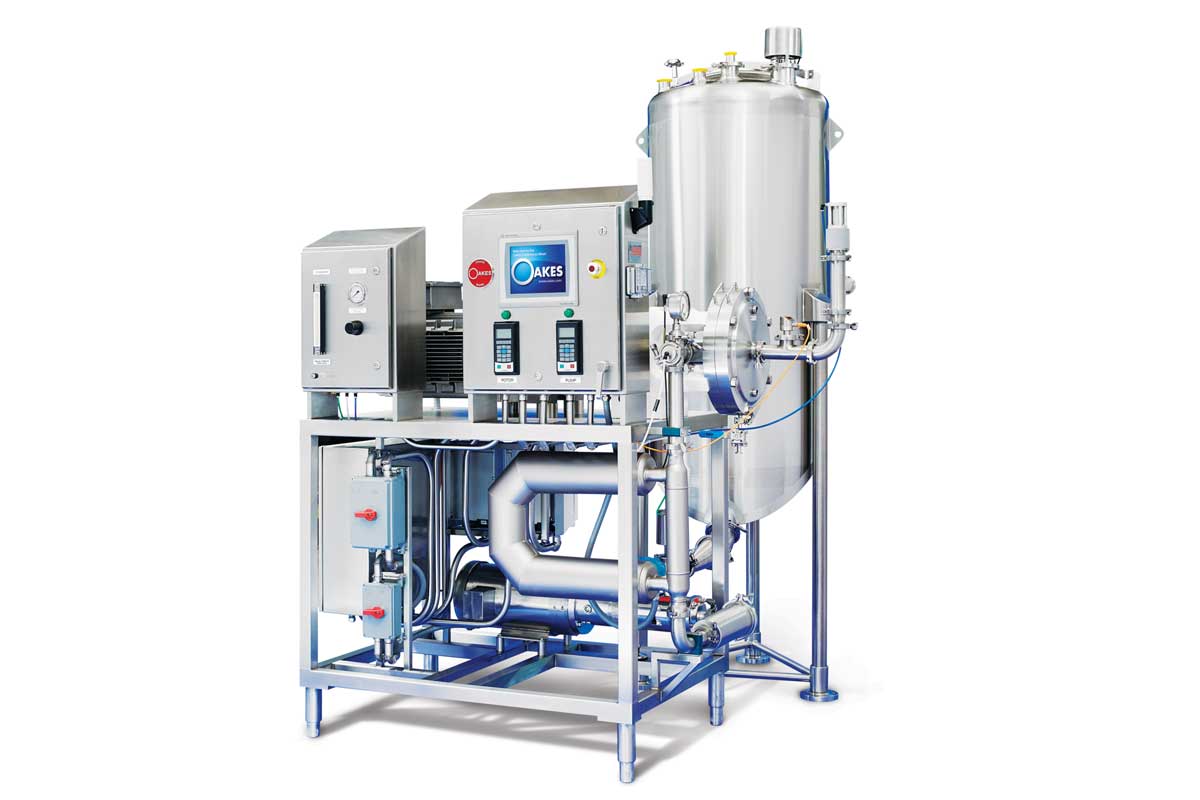 Bakers also refer to this density as a batter’s specific gravity, the ratio of a cake batter’s weight of equal volume compared with the same volume of water. It’s developed by incorporating air into the batter either by injecting it in a continuous mixer or through ambient air in a batch mixer. Each technology works differently to provide homogenous bubbles throughout the batter and create a satisfactory cake every time.

A mass flow meter measures batter density coming into the continuous mixer from the slurry mixer, and a mass gas meter precisely injects the correct amount of air based on the baker’s desired specific gravity.

To get optimal aeration in a continuous mixer, the chamber requires the proper back pressure.

“In order for the mixer to shear the air bubbles properly, it has to be under pressure to make it homogenous,” said Bob Peck, vice-president of engineering, E.T. Oakes. “That’s one of the secrets to the whole thing.”

Without this pressure, the batter will still aerate, but some of the air will escape back into the atmosphere. Bakers can find E.T. Oakes’ continuous mixer as well as its slurry mixer and holding tanks at the International Baking Industry Exposition (IBIE), which runs Sept. 7-11 in Las Vegas.

In batch mixing, bakers must first choose the right tool for the job.

“The whip is best for aerated or liquid batters, while the paddle is particularly suited for creamed batter, and the spiral allows the achievement of a structured dough,” Mr. Bartsch said.

The implements move through the bowl, breaking the batter’s surface and capturing air in the process.

“The amount of air you incorporate is really based on mix time and speed,” explained Damian Morabito, president, Topos Mondial. “As the implement breaks the surface, it captures air in the process, and the faster you do that, the more air you grab.”

Topos Mondial achieves this with its Topos T-750 double planetary mixer, which will be featured at the company’s booth at IBIE. The 350-liter mixer features two tools that spin and orbit in the bowl. An active scraper keeps batter from collecting on the sides.

With a little R.&D., bakers can discover the best tool combination, speed and mix time to obtain their target specific gravity. Optimum specific gravities are dependent not only on formulation but also temperature, mix times and speeds. Cakes with lower specific gravities tend to have higher volumes.

“Operators are always checking weight per liter to make sure they have the right aeration,” Mr. Morabito said. “If it’s not right, they can give the batter more time, whip it up a little more and get to the right aeration.”

Like pumps and piping, depositors can be an opportunity for batter to be compressed or experience turbulence.

Because specific gravity is such a delicate balance of variables, consistency is critical.

“Once you get it right and you have a recipe, keep all the parameters consistent: the ingredients, temperatures, ingredient scaling and water scaling,” Mr. Morabito urged. “Stay accurate and consistent, and you’ll be repeatable.”

And repeatability is key at the commercial level to create identical cakes throughout a production run. With recipe control, bakers can execute their process. Every step from starting up slow to ramping up to high and pausing to add inclusions can be programmed into Topos’ T-750 mixer for a repeatable process.

“A digital PLC-programmable mixer mixes right to the second,” Mr. Morabito said. “The speed and time are going to be dead-on because of the sophisticated controls.”

To help bakers hone in on each variable to achieve the desired aeration, VMI developed an equation to combine the parameters of planetary mixing. By considering the shape and diameter of the tool, the trajectory through the tank, and the speed of the rotation bakers can apply an optimal specific gravity or density to any capacity of product. With this equation, VMI can determine the exact speed variation a batter needs in the mixer to achieve emulsion while still maintaining aeration.

“The recipe programming will then ensure the repeatability of the optimal aeration process determined,” Mr. Bartsch said.

For continuous mixing, Tonelli’s Continuous Aerating Mixer (CAM) offers accurate control of air and nitrogen delivery as well as temperature through chilling and heating jackets. Flexibility is also built into the machine with a design that allows quick replacement of the mixing head to optimally mix the next batter.

The risk of the transfer

Once a batter is properly aerated, it still has to make it from the mixer to the pan and into the oven without losing any of that air. Otherwise, the baker will lose the volume and structure they spent time carefully developing, and finished product quality will suffer.

“It can come out of the mixing bowl perfect, and in the next step of the process — the transfer from the bowl to the depositor and the depositor to the pan — you don’t want to change that specific gravity,” Mr. Morabito said. “That’s the next trick.”

The transfer from the mixer to the depositor is the first risk to those delicate air bubbles. Batter can be moved a couple of ways, either being dumped out of the mixer into a hopper or pumped through piping into the hopper or directly into the depositor. 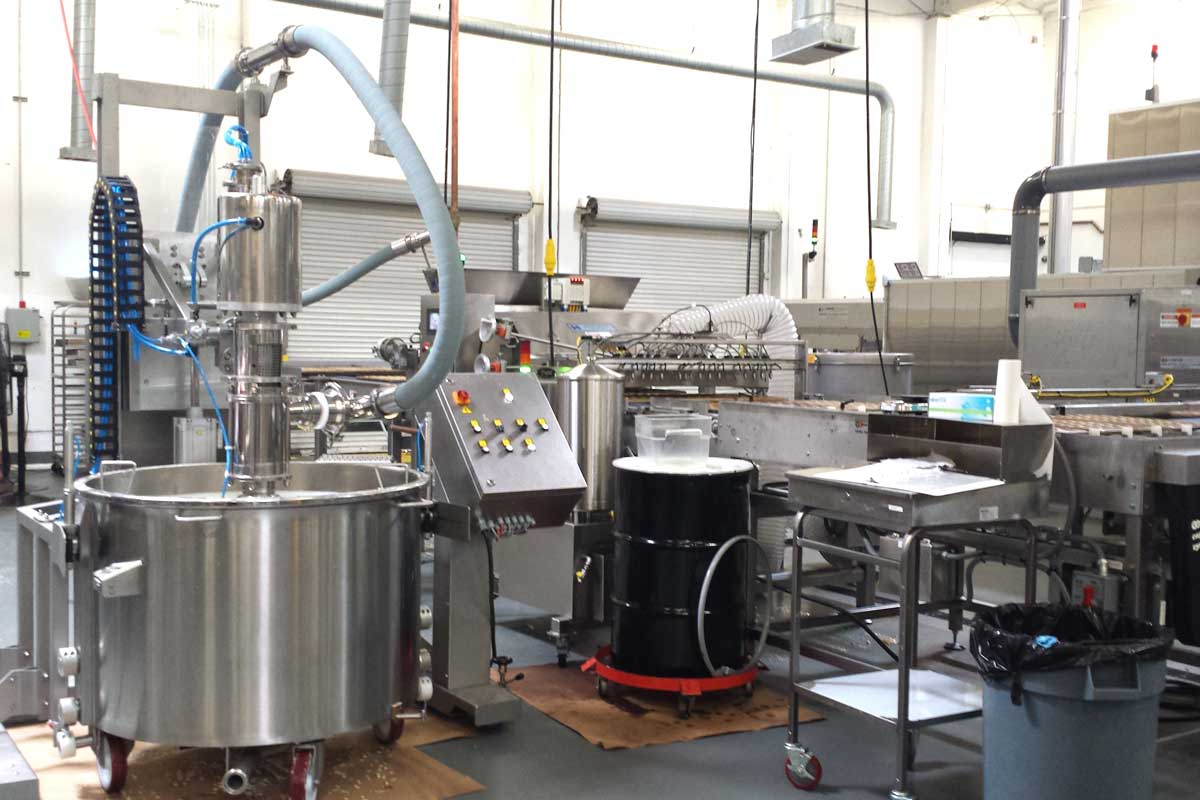 Raising and tilting the mixing bowl to pour batter into a hopper will have minimal impact on the aeration, if any at all, Mr. Morabito said. In this scenario, however, operators will need to use a long-handled spatula to fully empty out the entire bowl.

“Bowl scraping isn’t critical, but you want to get most of the batter down into the hopper,” he said.

Pumping the batter may be an efficient way to move it from mixing bowl to depositor, but that also puts pressure on the batter, which will de-aerate. To protect specific gravity, the journey must be as smooth and short as possible.

The less time batter spends in the pipe, the less chance it has to be de-aerated.

“Whenever you introduce a long flow path of pipe work, you risk the chance of compressing the product, resulting in the aeration being lost or completely eliminated,” Mr. Gregg said.

Handtmann designed its equipment to minimize the flow path from the hopper into the depositing pistons to maintain the characteristics the mixer has developed.

“At the same time, this helps us maintain consistent weights across the depositing manifold, which is critical not only to keep cost under control but also for product consistency in terms of baking height, color and finished product texture,” said Cesar Zelaya, bakery sales and technology manager, Handtmann.

Unifiller’s Hopper Topper transfer pump uses a suction movement to gently move batter out of the hopper into the depositor. It’s able to do this without compressing the batter and de-aerating it, maintaining product integrity.

If aeration is still lost after shortening the path from mixer into the depositor, operators can compensate by over-aerating at the mixer.

“If you know it comes out of the mixer at a certain specific gravity, and you know you’re going to lose some in the transfer and depositor processes, you can accommodate that loss so the specific gravity will be where you want it to be in the pan,” Mr. Morabito explained.

Today’s process controls and measuring enable bakers to harness these numbers and exert control over the aeration process. 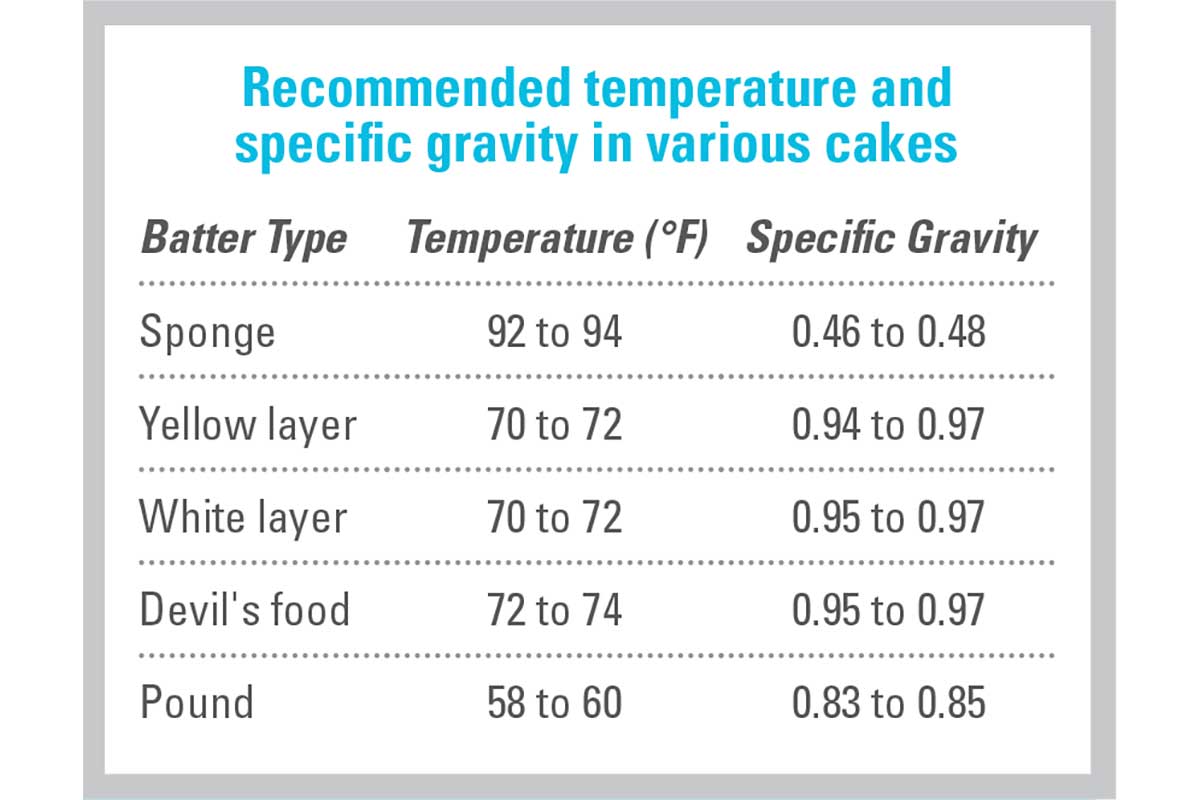 Another risk to batter during the transfer stage is unforeseen floor time.

“If you’re not consistent in the floor time, depending on the leavening agent, your aeration is going to be all over the map,” Mr. Morabito said.

While not all batters are sensitive to extra floor time, spongier cakes that don’t get into the oven on time will be lighter and airier than those that went through production efficiently.

The final risk to aeration comes in the form of the depositor. Like pumps and piping, depositors can be an opportunity for batter to be compressed or experience turbulence. Whether a piston depositor or a manifold, the latest cake depositors are designed to treat batters as gently as possible to prevent de-aeration.

“When depositing, key considerations for aerated products involve ensuring it doesn’t become deflated during the depositing process,” said Jon Cabral, marketing director, Erika Record. “Bakers should consider transfer methods and how the product is handled by the machine.”

Erika Record offers the MONO Confectionery Depositors, in which operators can adjust depositing speeds and gears to accommodate products with significant aeration.

To protect aeration, Hinds-Bock depositors have large port openings and the shortest possible flow path through the equipment.

The company will be exhibiting new designs of its Single Piston Bakery Depositor, also known as SPL-1, and its Six Piston Fully Automatic Muffin and Cake Depositing Line at IBIE. Both machines include recipe-driven user interface, flexibility to run a variety of sizes and are designed to roll in and out of a line for easy sanitation.

Repeatability is key at the commercial level to create identical cakes throughout a production run.

Hinds-Bock designed the SPL-1 for a compact footprint in addition to flexibility and easy cleaning. It can deposit a range of batters, including those with inclusions. The newly designed six-piston depositing line with integrated paper cup dispensing and multi-piston depositing aims to create production efficiencies for bakers looking to maximize their production rates with smaller footprint requirements.

Unifiller uses volumetric piston fillers designed to be very gentle on batters. Working volumetrically, these depositors don’t put a lot of pressure on the batter and protect air bubbles as the product is measured and deposited.

Some depositors use flow to their advantage. E.T. Oakes, for example, uses laminar flow in its pressurized manifold depositors to prevent de-aeration.

“Laminar flow is important as the batter moves through production,” Mr. Peck said.

These manifolds don’t have any open hoppers, and everything that gets metered into the manifold is immediately deposited out.

“There are no dead spaces,” he said.

At IBIE, E.T. Oakes will showcase a new design of this depositor with an improved laminar flow design.

“We made everything in the manifold with a spherical radii so no sharp corners, which is a really big issue,” Mr. Peck explained. “Everything is spherical for the best laminar flow possible.”

Whether producing an angel food or a pound cake, all batter needs aeration, and that aeration needs to be protected throughout the commercial baking process. Sophisticated mixer controls and gentle flow and depositing has empowered bakers to zero in on optimal aeration and preserve it for perfectly consistent cakes.

Mixing under pressure ensures homogenous aeration and no free air escapes back into the atmosphere.