We use cookies to provide you with a better experience. By continuing to browse the site you are agreeing to our use of cookies in accordance with our Cookie Policy.
Home » Slideshow: High-speed croissant line gives Gold Standard competitive edge

Everyone who walks out of the locker room can’t miss the all-too-familiar-looking sign above the production floor entrance at Gold Standard Baking’s facility in Pleasant Prairie, Wis. “Bake Like a Champion Today,” a takeoff on the legendary slogan used by the University of Notre Dame, almost begs bakers to reach up and give it a high-five before beginning their shift at the 200,000-square-foot facility.

Not surprisingly, that’s exactly what Jeff Dearduff, president and chief executive officer, Gold Standard, does when he checks on the Pleasant Prairie bakery’s current single-line operation that produces 720 croissants a minute, or about 3.3 million fully baked frozen products per week. For the past 15 months, Mr. Dearduff has been putting the pieces in place for Gold Standard to ratchet up the Chicago-based company’s performance to a championship level. It has involved drafting new players, instilling a winning attitude, developing a heightened level of discipline and recruiting a veteran team of coaches to execute it all.

“We have an aggressive growth plan and a dynamic marketing effort as this company looks forward,” he noted.

Gold Standard is hardly starting from scratch. Mr. Dearduff oversees an established, high-growth business that includes the Wisconsin bakery and the 187,000-square-foot Chicago facility with a Danish line and three croissant lines. In many ways, the plants provide a complementary combination of speed and versatility. Despite the croissant process’ complexity, the Pleasant Prairie bakery runs like a high-volume bun operation that cranks out three similar stock-keeping units for a dedicated number of food service and quick-service restaurant customers. Once fired up, it’s designed for nothing to slow it down. 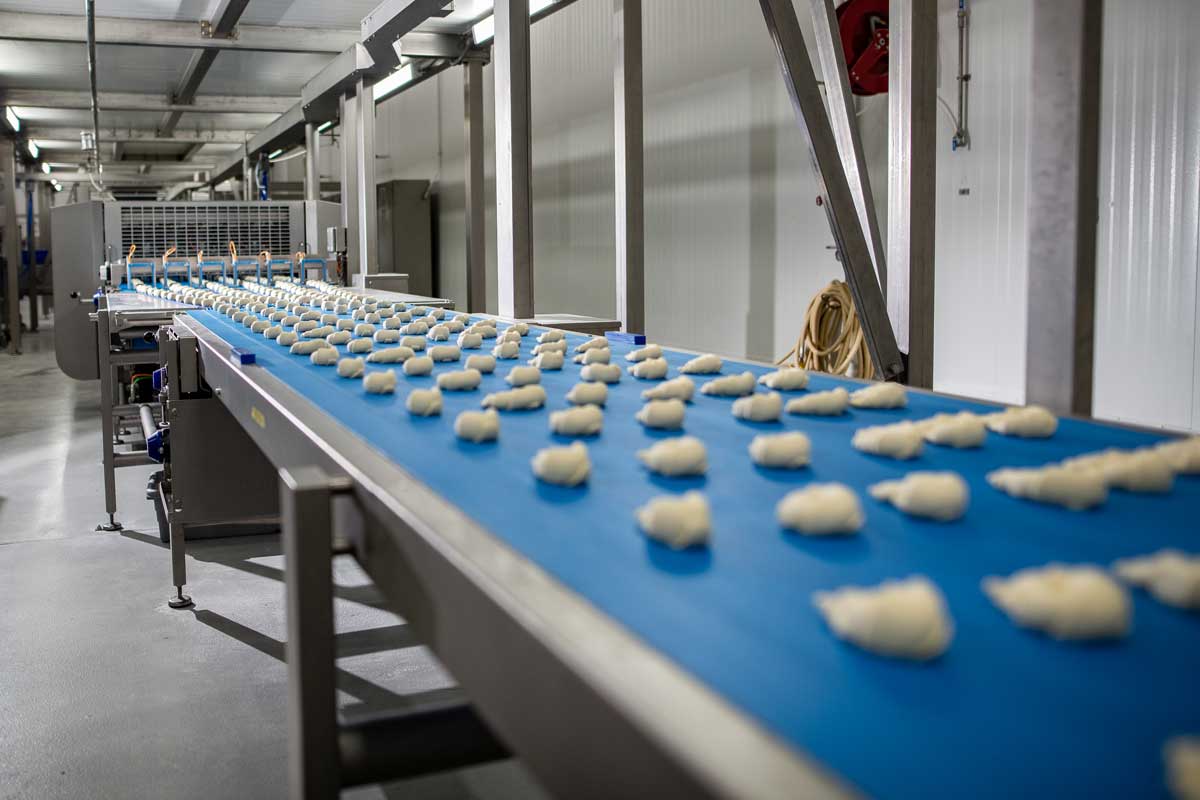 “This is a bakery with basically no changeovers,” Mr. Dearduff said.

Meanwhile, the plant on Chicago’s South Side turns out 100 different s.k.u.s of croissants, Danish and cinnamon rolls. Together, the two operations produce 13 million units weekly between Danish and croissants that allows Gold Standard to better serve its core base while venturing further into such channels as in-store bakery/deli, convenience stores, sandwich assemblers and co-manufacturing.

About 110 people work five to six days a week at the Pleasant Prairie operation while more than 300 team members work six days a week at the Chicago plant. During Baking & Snack’s visit in late July, the Wisconsin bakery just started firing up production for the week. Typically, the facility receives two daily truckloads of flour, which are stored in one of two Contemar, 100,000-lb nylon-sack silos with all ingredient handling operations controlled by an automated Shick Esteve system. A second enclosed silo serves as a backup with ample space to add silos.

Mixing and makeup occur in a temperature-controlled room set at 60˚F with space for two to three additional makeup lines when necessary. The production process begins with a 2,000-lb horizontal mixer by Shaffer, a Bundy Baking Solution company, that prepares four 1,700-lb doughs per hour. The 140-degree overtilt mixer comes with a glycol jacket and chilled water system to maintain dough temperatures at around 55˚F. Bulk flour is weighed in a 1,500-lb scale, while minor ingredients such as salt and sugar are added via an ergonomically friendly mezzanine dump station at the top of the mixer.

The dough then drops into a Shaffer dough chunker and onto a dual-belt vertical conveyor system to the Rademaker lamination line. Here, a fluffy 3.5-inch dough sheet enters an initial reduction or gauging station to reduce the thickness of the sheet before it is folded over butter or margarine spread evenly down the middle. Throughout the line, flour dusters provide a light coating before and after every gauging station to prevent the sheet from sticking. Along the line, a series of scrapers remove dough, fat and flour dusting that may build up regularly to ensure longer periods of uninterrupted flow of production without hourly cleaning.

After passing through another reduction station, a reciprocal conveyor or lapper folds the sheet to start the lamination process on a 90-degree conveyor below. The folded sheet moves through a third gauging station to a second lapper for additional folding and lamination.

The sheet then heads up an incline conveyor to the top of an overhead retarder that slowly reduces the dough’s temperature to 50˚F as it zig-zags down for 30 minutes. A cross-roller gently stretches the laminated sheet across the 1,250-mm (49-inch) blue belt with trimmers removing the edges and scrap tumbling into 50-lb tubs for reuse in subsequent mixing. Three consecutive gauging stations reduce the sheet to its final thickness before it moves through a laning unit with a circular “pizza” cutter. Six dough strips then enter a triangle die cutter and an aligning unit that precisely positions the pieces for the reversible belt curling unit. The dough pieces glide through the bending unit and a pinching unit that automatically closes the tips of the croissant pieces together, said Tom Barry, bakery director, Gold Standard.

“We have an aggressive growth plan and a dynamic marketing effort as this company looks forward.”

Finger conveyors spread and align the pieces along the conveyor before they drop onto 36-piece pans — the only size currently used on the line. From here, the pans leave the “raw” product makeup room and enter a CBF Bakery Systems step proofer for about 70 minutes in a separate department. The temperature- and humidity-controlled system includes two side-by-side proofers, where 12 pans at once slowly rise up one step at a time, then slide across and down each unit.

Freshly baked croissants next enter a Capway depanner and head to a Tecnopool enclosed spiral cooler set at 60˚F for 35 minutes prior to packaging. Meanwhile, the pans circle back through two CBF pan coolers that dramatically reduce their temperature as they re-enter the makeup area. Mr. Barry noted a Workhorse robotic pick-and-place pan handling system monitors pan flow to ensure that the line operates smoothly.

In the separate packaging department, the croissants travel to two, side-by-side LeMatic slicers and bulkpack systems that create 30-piece pillow packs. After Safeline metal detection, the pillow packs drop into sturdy cardboard trays that had been automatically created by an Ipak tray former. These trays are conveyed to a separate room, where five of them are manually placed into cases and palletized. A Wexxar case erector, Bel tape sealer and a LanTech shrinkwrapper assist in the process.

Throughout the day, the pallets are shipped to a nearby third-party freezer, which holds about 60,000 cases of inventory for the bakery’s key customers.

Certainly, there’s plenty of room to expand in the Pleasant Prairie plant, where up to four more production lines can be added. Under the current game plan, Gold Standard is open to a wide range of options for the multi-purpose facility as a part of its goal to double the company’s size organically over the next five years.

“Once we see our current lines close to being tapped out, we will be ready for whatever comes at us,” Mr. Dearduff said. “Although we currently produce croissants, Danish and cinnamon rolls, the future could lead us in completely different directions. We can use this building to house a bun line, bread line, pretzel line, frozen dough line or cookie line.” 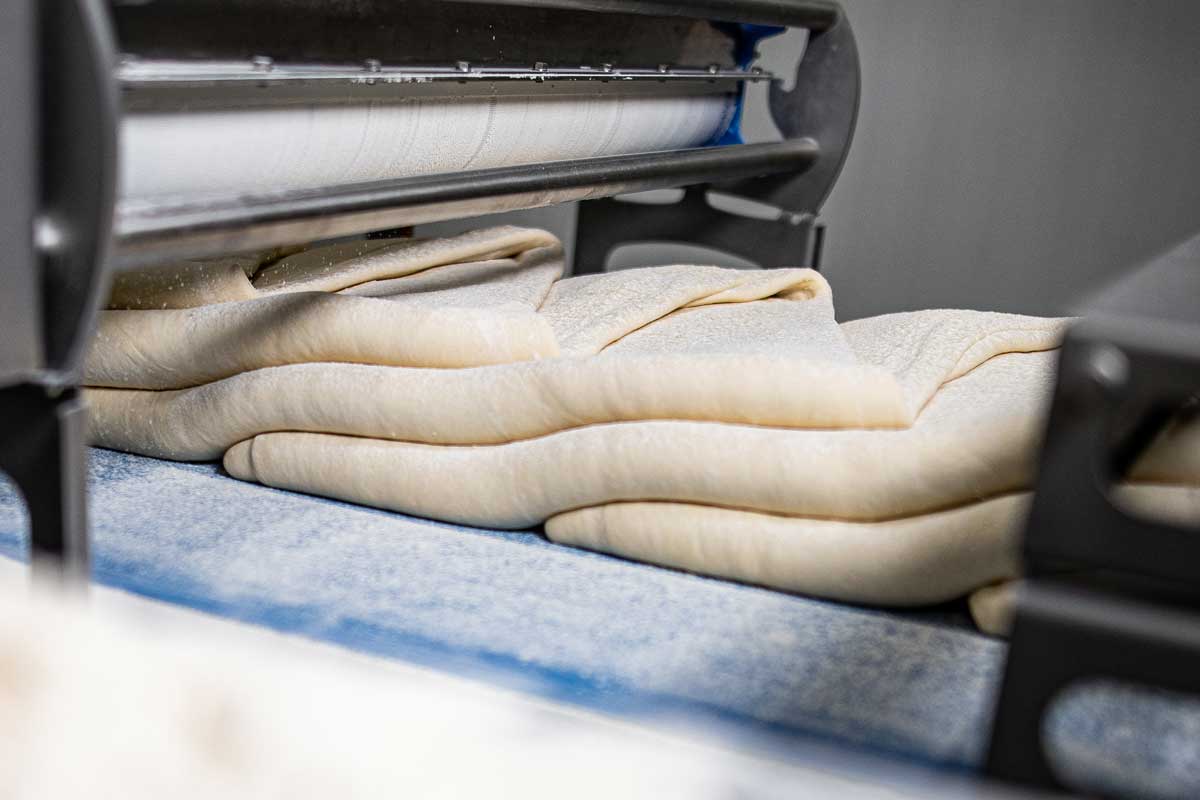 That’s a message the leadership team has for the industry.

“If somebody wants to get out of producing something, we can take on your equipment and run your product for you,” Mr. Dearduff added. “There are no guardrails around what we’ll consider doing.”

Such changes are all part of putting together “the new Gold Standard,” as Mr. Dearduff likes to say.

“Looking at the future, we are in a growth-based mindset,” he said. “We’re looking at any type of opportunity outside of our core, but we do have a core that we work on improving every day.”

That’s especially true on the newest high-speed line in Wisconsin.

“It takes fine-tuning to a new level,” Mr. Dearduff said. “It’s like planning to win the Indy 500 rather than just racing in it. You have to be perfect every step of the way to produce the amount of product that’s needed at the highest quality and the lowest cost.

“It’s not a victory lap yet. But we’re knocking on the door.”

And ready to seize every golden opportunity.

This article is an excerpt from the September 2019 issue of Baking & Snack. To read the entire feature on Gold Standard Baking, click here.