For a whole new generation of bakers, a little knowledge is proving to be a wonderful thing. Instead of sticking to the tried-and-true, they’re willing to explore something new. While following the traditional textbook when it comes to the hard-and-fast rules for mixing, bakers are also exploring what’s best for any given product. Sometimes there’s more than one way to get a better result.

“We’re seeing more bakers who are willing to embrace what’s new and different,” said Damian Morabito, president and chief executive officer, Topos Mondial. “The more established bakers are somewhat in-between, and the ‘new’ guys are coming in not as experienced, so they’re trying to gather their information through the web and anecdotally through suppliers.”

Unshackled from preconceptions about how and why things were done in the past, they’re listening to new ideas more than the old-school bakers would.

“A traditional baker frequently only knew what he learned and stayed with what he knew and wouldn’t reach out more because the pace of technology and information was slow,” Mr. Morabito explained. “It’s a generational development with younger people relying more on technology that’s moving at a much faster rate.”

Of course, it doesn’t hurt that there are more options available from digital controls for a better understanding of how the mixing process works, said John Hunter, sales account manager, bakery and ingredient handling, Bühler Group. 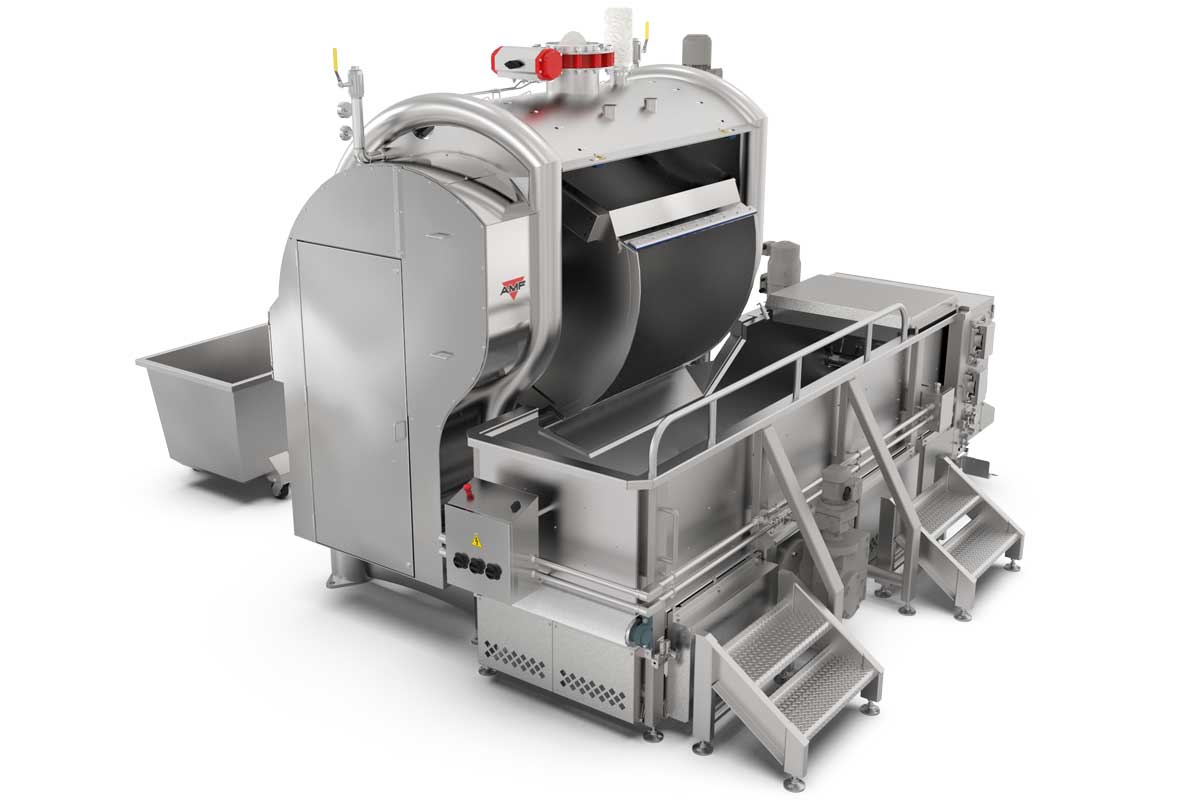 “There’s more openness to using different technology, especially with the tailoring of mixing to the product,” Mr. Hunter said. “They’re exploring multiple mixing processes in a bakery or multiple bakeries because of greater diversity of the product. We’re finding ways to better automate artisan processes, allowing for longer fermentations and use of vertical space with storage-and-retrieval systems, either for bowls or troughs. This new generation of bakers is looking at continuous mixing for bread and allowing for prehydration of ingredients before going through the final stage of the dough mixing process.”

Heat of the moment

“Using horizontal cooling channels on a horizontal mixer achieves this uniform cooling heat transfer while also increasing the stiffness and strength of the bowl and jacket,” he said. “An inherently higher moment of inertia in the horizontal jacket design accomplishes both of these objectives.”

Mr. Kesig added that a Peerless horizontal flow-style jacket directs the coldest glycol directly to the bowl area with the greatest dough contact and kneading forces.

“The temperature is maintained across the full length of the bowl sheet, thus eliminating any thermal gradients to optimize cooling,” he explained.

Marc Ferree, sales engineer, Shaffer, a Bundy Baking Solution, pointed out that bowl jackets have been around “forever,” and refrigerated agitators have been in use for more than a decade.

“However, the overall details of design of the jacket and agitator continue to be reviewed to make sure they offer maximum strength and dough cooling,” he said. “The cooling of dough during the mix cycle is most critical for downstream machining of dough and preventing early fermentation.”

Specifically, Shaffer’s triple-roller bar mixers with a refrigerated agitator and VerTech cooling jacket provide enhanced dough temperature control. The new VerTech design is engineered to distribute dough force over a larger area and results in 75% reduction of stress on channel material and 63% reduction of stress on weld joints. Moreover, Mr. Ferree said, the energy-efficient design provides the same heat transfer with up to 46% reduction in pressure over older designs, resulting in less energy to operate the glycol system. 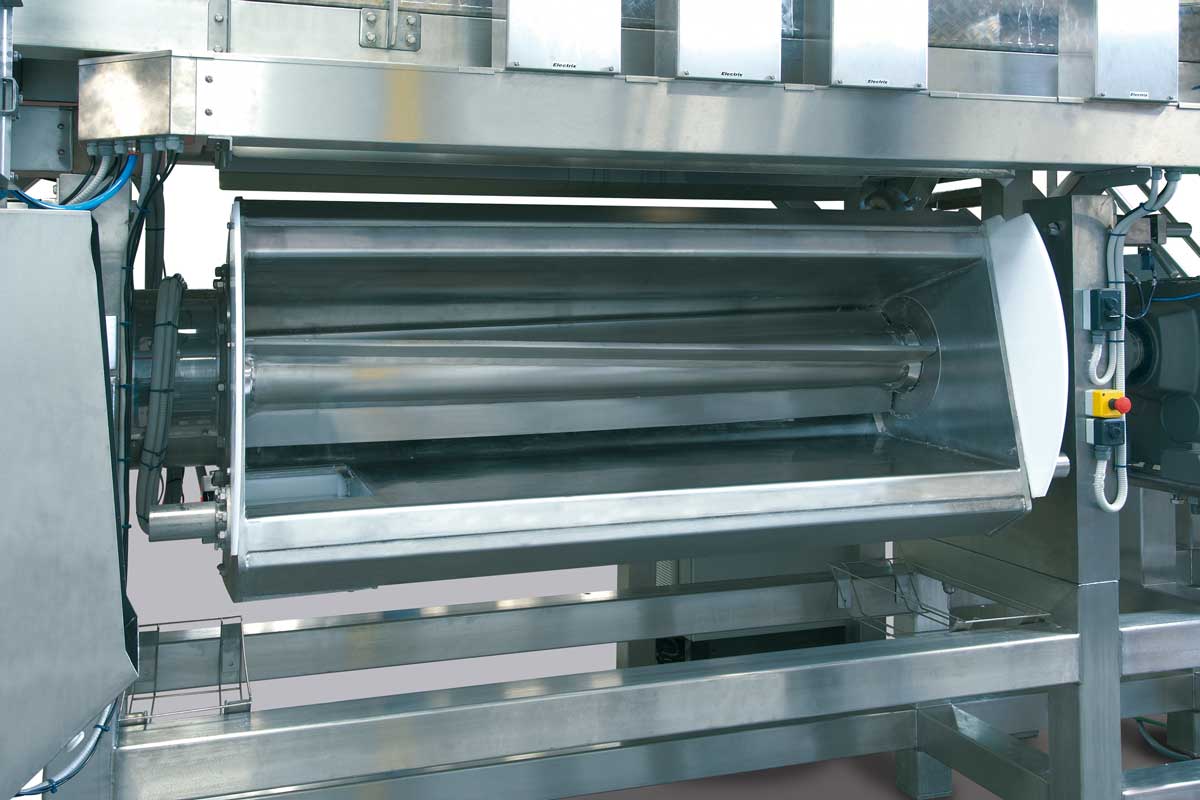 “It continues to surpass expectations on cooling efficiency, bowl strength and longevity,” he pointed out.

Based on double-tool technology, the Kneadster by VMI comes with larger tool diameter and synchronized rotation that prevents rises in dough temperatures, promotes stretching and aeration, and creates the necessary shearing action to properly develop from soft to stiff doughs.

“The mixer’s efficient integration of the ingredients decreases the total mixing time by about 30% and limits the increase of the final dough temperature by around 50% compared to a conventional spiral mixer,” said Terry Bartsch, president and c.e.o., VMI North America.

One way to avoid heat transfer is not to create it in the first place.

“Our whole mantra is, ‘If you properly configure the mixing bowl — the bowl shape, the RPM of the agitator and the proper roller bar diameter and roller bar clearances — you don’t make the dough hot,’” Mr. Morabito said.

Topos adjusts its mixers for dough absorption to achieve the proper kneading effect for soft doughs, which require higher RPM and longer mix times than stiffer doughs. A digital operator interface allows bakers to control the speed of the mix.

“With the three roller-bar mixer, it’s all about sheeting, folding and kneading the dough,” Mr. Morabito said. “Unless you have that action in the bowl, you’re just wrapping the dough around the roller bars, and it’s just going for a ride.”

Tools of the trade

Many small- to mid-size bakeries require versatile mixers because of their broad product portfolio. VMI’s SPI AV mixers come with a quick tool-release system that makes it possible to use a traditional spiral to make an Old World bread or a twisted spiral to produce yeast-raised donuts.

“VMI understands the impact on the texture of the finished product by offering different types of tooling with this range of mixers,” Mr. Bartsch said. “Depending on the mixers’ shape, diameter and mechanical movement, they will stretch, shear and aerate the dough in different ways. VMI makes it possible with the SPI AV to easily change out the spiral tooling for a paddle, a spiraled paddle or a whip for more liquid or less-dense products.”

“The tooling and kneading chamber for a bread dough will be different from the ones provided to produce a croissant dough,” Mr. Bartsch noted.

While following the traditional textbook when it comes to the hard-and-fast rules for mixing, bakers are also exploring what’s best for any given product. Sometimes there’s more than one way to get a better result.

Koenig’s line features a spiral mixer, a twin-twist mixer and a bowl hoist for supplying the lines with the mixed dough, all in different capacities. The twin-twist mixer comes with two tools with a specially adapted profile placed in a working angle with one another to increase the transfer of mechanical energy and shorten the mixing time. Koenig’s DW 240 twin-twist mixer in hygienic design “H” model also comes with a washdown frame and machine head that’s sealed and welded.

“These mixers obtain excellent results with wheat, pastry, cookie and wafer dough because air and oxygen are worked into the dough,” said Rich Breeswine, president and c.e.o., Koenig Bakery Systems. “The mixer is suitable for hearty, European-style rye and rye-wheat doughs.”

“The mixer has a redesigned high-speed developer for manufacturing highly developed dough at low temperatures and is proven to create more consistent color and height in buns and rolls,” observed Jim Warren, vice-president, Exact Mixing, RBS.

The company’s MX Continuous Mixer offers efficient mixing for cookies, snacks, batters, icings and pastes. It is also used for products where inclusions are a large portion of the recipe.

At the International Baking Industry Exposition (IBIE), RBS displayed its Hydrobond Technology that instantly hydrates dry materials and speeds up the continuous process allowing for the use of a shorter mixer with a smaller footprint, lower equipment costs and decreased energy costs, according to Mr. Warren.

“It brings liquids and a dry ingredient stream — typically flour — together quickly just before the main mixing chamber with little temperature increase,” he said. “These changes are enhancements to the process supported by continuous mixing, which offers reduced labor requirements, fewer electrical energy requirements, excellent data acquisition and recording, and a food-safe, enclosed process.” For pre-hydrating ingredients, the DymoMix from Zeppelin Systems can be combined with a CODOS continuous kneader or used as a stand-alone device to make products ranging from liquid sponge to starch blends to fat-and-sugar creams to improve transfer, metering and mixing characteristics in downstream processes.

“This level of micro-mixing reduces kneading time and total required horsepower for the same mixing throughput,” he said. “In many cases, it allows bakers to increase hydration of fresh products while maintaining the same quality of machinability and final texture, often lowering the unit cost in the process.”

WP Kemper and Zeppelin Systems announced a strategic partnership with the Zeppelin DymoMix and the WP Kemper Kronos mixer that pairs prehydration with a batch mixer to reduce mixing times by up to 40% with industrial capacity of up to 10,600 lbs per hour.

With the KroMix, bakers can add 2% to 10% more water to the dough without any effect on the next process step.

“This means the bakery can reduce its flour capacity, resulting in a cost reduction,” said Patricia Kennedy, president and c.e.o., WP Bakery Group USA. “Bakers can adapt this recipe, and with more water, achieve more taste in their products. This system provides consistent dough quality and greatly helps stabilize the entire process and minimizes the risk of equipment downtime.”

In addition to reducing flour dust, the KroMix provides greater control of dough temperature for a wide range of products, Ms. Kennedy added.

“The mixer knows exactly when the dough has the best kneading result by measuring parameters such as dough stiffness, supplied energy, dough viscosity and dough temperature,” Ms. Kennedy said. “The system calculates the time of the complete mixing process automatically.”

At IBIE, Bühler featured its ContiMix continuous dough mixing and JetMix hydration systems, which provides greater absorption and other benefits.

“To me, labor is the most important factor,” Mr. Hunter noted. “You’re using technology to make more consistent processing conditions instead of relying on an operator to determine if the dough is actually being mixed optimally. As a result, you’re getting greater predictability that improves overall product quality.”

This article is an excerpt from the September 2019 issue of Baking & Snack. To read the entire feature on mixing, click here.