We use cookies to provide you with a better experience. By continuing to browse the site you are agreeing to our use of cookies in accordance with our Cookie Policy.
Home » Picking up the pace of artisan bread production

Picking up the pace of artisan bread production

It was a big trend that stood out at the International Baking Industry Exposition (IBIE), held in Las Vegas last month: artisan bread production. It’s an area where consumers are pushing demand for crafted, fermented products that feel handmade.

At IBIE, show features such as the Artisan Marketplaces, Crafted by Puratos and the Bread Bakers Guild of America, gave bakers the chance to ideate artisan products that they could walk away with … and then visit ingredient and equipment exhibitors to discover how to bring them to fruition.

“For me, artisan is bread that looks hand-crafted and rustic and is made without dough conditioners and baked in radiant heat,” said Mikael Ljunggren, master baker, Sveba Dahlen.

Artisan — even artisan-like — is creeping into many facets of commercial bread production and foodservice. “An evolution has occurred slowly, in front of our eyes,” said Damian Morabito, president and chief executive officer, Topos Mondial Corp. “Even in fast food, the buns have become better across the board. It’s more of an artisan roll because they want to get away from the soft bun that used to simply soak up the grease of the burger,” he said.

The key to artisan production is taking the time for the extra steps. “It’s about the fermentation and the flavor development of the dough,” said Cesar Zelaya, bakery sales and technology manager, Handtmann, Inc.

To handle this kind of dough, process steps like pumping, which tends to degas the dough, no longer do the trick. And when artisan bakers are scaling up a traditionally handmade process, new technology can alleviate the physical toll it takes on a baker to transport that much dough. “Artisan bread is richer and needs to be handled with greater caution and less pressure or stress,” Mr. Ljunggren said.

Therefore, it’s important to look carefully at not only the equipment that makes up the bread but also those pieces that get the dough to where it needs to go. “Producing artisan-style bread requires the ability to use equipment that can accommodate doughs that have some extended fermentation with normally higher moisture content,” said Ken Johnson, president, Gemini Bakery Equipment.

Out of the mixer

Fermentation is the game changer in bread production. It’s the big consumer draw, and the extra steps required will affect how the dough is handled, especially for processes like sponge-and-dough.

“You don’t just push the ingredients to react with chemicals; you let nature do what it has done with bread for thousands of years,” said Bobby Martin, executive product manager, AMF Bakery Systems. “The longer fermentation time requires a system with containers that will hold a sponge for whatever period of time the baker needs.”

Fermentation time could be anywhere from a few hours to a whole day depending on the product, so flexibility is key.

It’s important to look carefully at not only the equipment that makes up the bread but also those pieces that get the dough to where it needs to go.

Transporting artisan dough out of the mixer and to the next stage of the process — whether it’s a fermentation room, makeup table or hopper of the divider — must be executed carefully and efficiently.

“You obviously always want to increase your throughput, but you have to watch the integrity of the dough and how you move it,” Mr. Zelaya said. “You want to maintain the characteristics, whether you’re running slow or fast.”

Traditionally, artisan dough has been mixed in smaller batches in vertical mixers. Today, these are designed with tools such as bowl lifts that aid in careful transport and discharge. “This automatically keeps an even amount of dough in the divider hopper and ensures maximum weight accuracy and texture quality,” Mr. Ljunggren said.

Various VMI mixers offer discharge options depending on the requirements of the product and process, said Terry Bartsch, president, VMI North America. “As a vertical mixer company, one means of transferring dough from the mixer to downstream is moving the bowl to a bowl lift feeding the processing equipment,” he said. “One advantage of using a bowl lift is the capability of rotating and scraping the bowl during the discharge process.”

Another effective way to move dough from the mixer to downstream is with a vertical mixer with a bottom discharge. “The mixers in this system have a trap door mount in the bottom of the bowl. At the end of the mixer cycle, the trap door opens and the dough is discharged onto a conveyor belt mounted under the mixing bowl,” Mr. Bartsch explained. “Dough is transported downstream by a conveyor system. The advantage of the bottom discharge systems is that dough is transported downstream automatically without the need of an operator.”

As artisan bakers scale up, many find themselves dealing with a lot more dough than they were used to, and the transport can become somewhat of a logistical nightmare. Automation is key to maintaining control over the process for a product intended to be consistently inconsistent.

AMF Bakery Systems developed the Automated Guided Vehicle (AGV), which was on display at IBIE, to robotically transport troughs anywhere in the bakery, whether it’s to the fermentation room or the hoist to the dumping station. 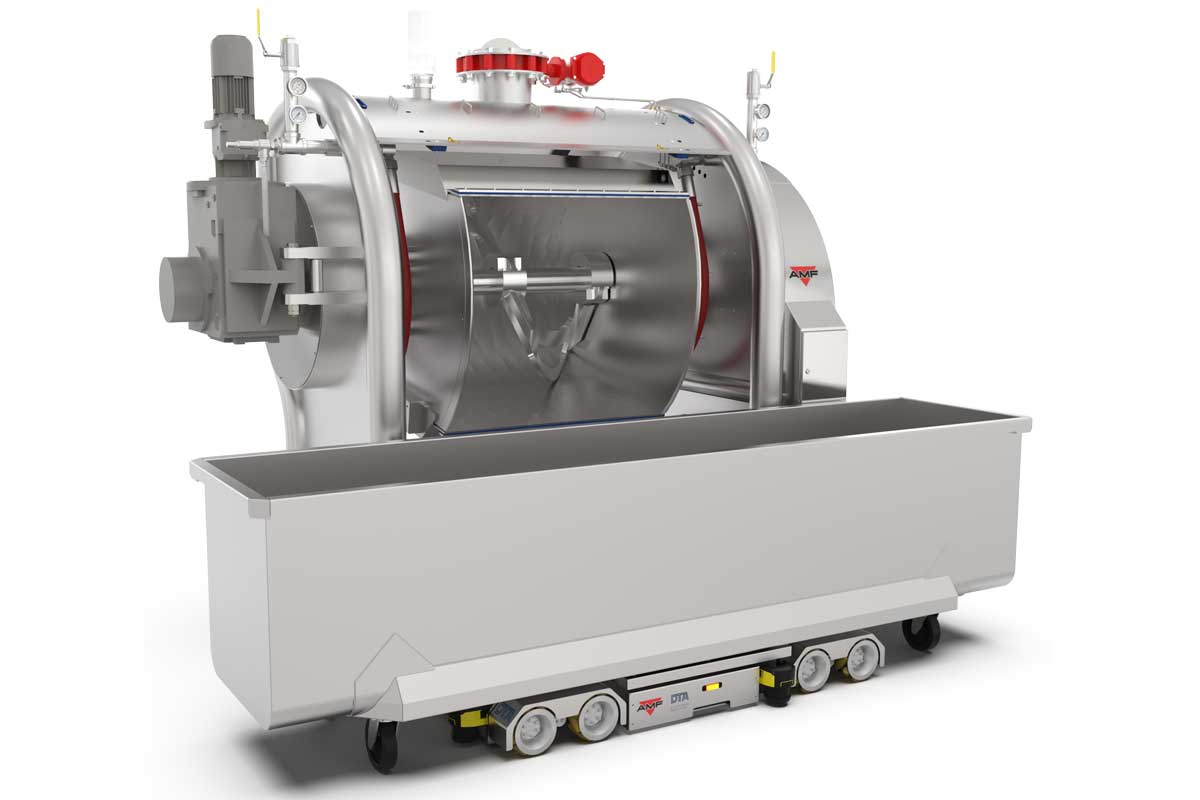 “This automatic system knows what trough was placed in which position at a specific time,” Mr. Martin said. This not only helps with the logistics of moving several troughs throughout the bakery, but it also allows bakers to easily monitor and control the fermentation time that may vary between products. At the specified time, the vehicle arrives at a trough based on the virtual “address” that’s been programmed in; it then attaches itself to the bottom of the trough and drives it to the designated location.

“This system offers a lot of flexibility because you can make a product with 12 hours fermentation of a sponge or a product with 48 hours fermentation time,” Mr. Martin explained. “Through recipe management, all you need to do is send the AGV to the proper spot when the sponge is ready. Wherever the mixers are and the areas where the dough troughs go, the AGV can pick up, rotate and move the trough.”

Similarly, VMI’s In-Line Mixing System shuttles vertical mixing bowls from the mixers to fermentation areas when required and then to a bowl lifting station, where the bowl can then be rotated and scraped to gently and efficiently dump the dough to the chunker or divider hopper. “Artisan bakers automating the loading of mixing bowls, moving them through the bakery and lifting them up will benefit from this automation,” Mr. Bartsch said.

Kemper equipment from WP Bakery Group also helps traffic dough through the system, based on individual production specs. “Bakers give us the parameters of how they make their dough,” said Ferdinand Kottier, director of sales, WP Bakery Group. “One of those is resting time, and that’s something we work with, depending on how much dough they’re processing per hour. We have systems to rest the dough in a kind of container that moves automatically through a railway system in a climatized box.”

In commercial production, moving dough of any type can start to look like a civic infrastructure with highways and byways, and it can get even more complex when dealing in artisan, especially when scaling up inside a smaller footprint.

With Topos’ smart conveyors, Mr. Morabito suggested that looking strategically toward the future can help. For example, the company built for a particular customer a system designed to accommodate four lines, while the bakery was still running only two. “The smart conveyors determine where the dough piece will go based on priority,” he said. “With the right information up front, and through smart engineering, we can work into the design to feed two, three or four lines in the future when they’re ready to scale up.”

The art of the chunk

In high-speed pan bread production, the dough often needs to be degassed, and it’s sturdy enough to take a beating from a dough pump or divider. But stiff, high-moisture artisan dough requires a bit more TLC; this is where the extra chunking step comes into play. “Using a chunker to feed the divider allows the dough to remain in the same state it was when it left the mixer,” said John McIsaac, vice-president of business development, Reiser.

Old-school artisan bakers may still be cutting the dough and feeding it to the divider by hand, but as demand for artisan products increases, Mr. Morabito is seeing more requests to automate this step. “They don’t want to be cutting dough out of a bowl or trough and putting into the hopper of the divider,” he noted.

However, bakers who are still hand-feeding can ease this process when using Handtmann’s smaller 608 divider series. “Those machines have the split top, which means the artisan baker can fill the dough easily in the hopper because you can open the upper part of it,” Mr. Zelaya said. 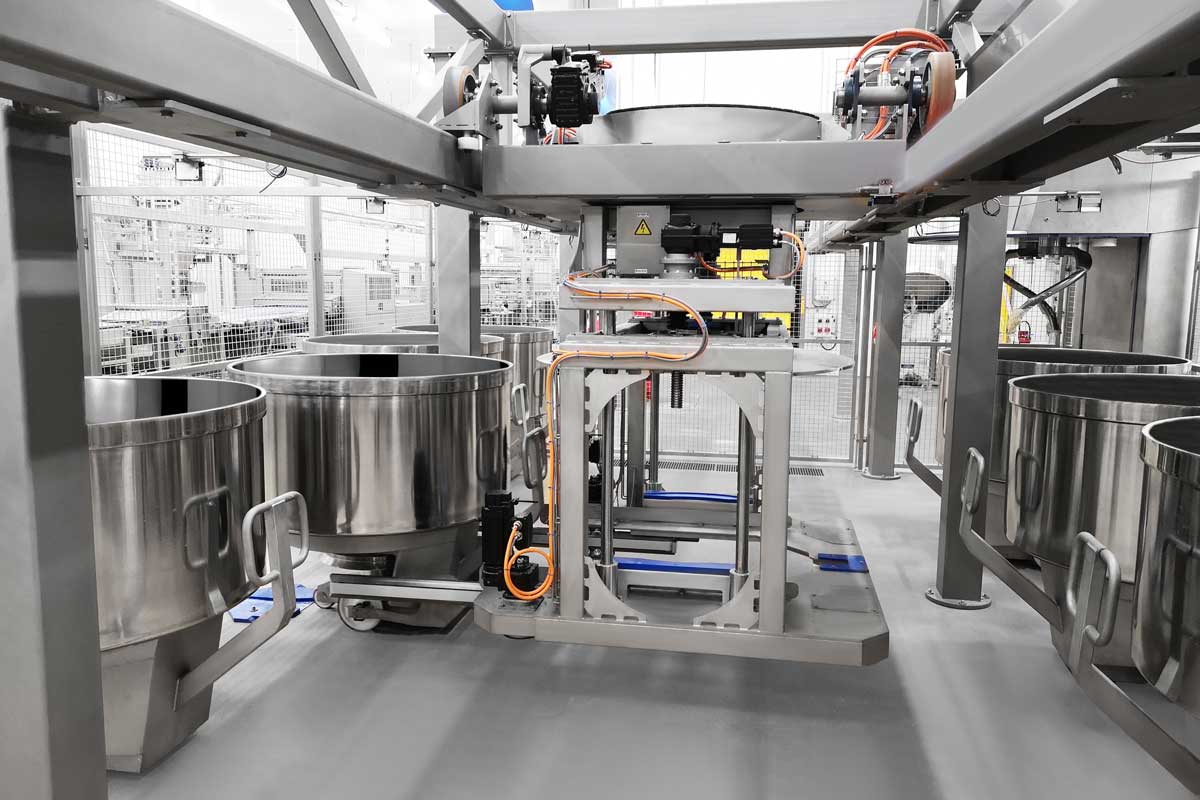 VMI also offers an intermediate hopper to chunk the dough before it goes to the divider. “Oftentimes the downstream equipment doesn’t have a big enough hopper to take the whole batch from our bowls, we can drop it into an intermediate chunker,” Mr. Bartsch said. After a star wheel rotates and cuts the dough into chunks, it heads to a smaller processing hopper with a 150- to 200-lb maximum capacity.

Because some artisan doughs can be much firmer, they can be a bit on the stubborn side, so Mr. Morabito stressed the importance of geometry. “The chunker has to be designed to let the dough settle down onto the blades at the bottom so it can give you a nice chunk each time,” he suggested. “And the chunk has to be sized appropriately for the throat of the divider so it will go down easily. If it’s too small for the throat, you’ll leave air pockets in the dough from the scaling process; if it’s too big, the dough won’t settle, which will also leave an air pocket in the scaled dough piece.”

In addition to geometry, having a proper oiling system is also key, according to Mr. McIsaac. “The FME textured surface really excels here in that it holds the oil well and allows the dough to flow to the Teflon-coated chunk cutter,” he said.

This article is an excerpt from the October 2019 issue of Baking & Snack. To read the entire feature on Dough Handling, click here.