Listen to this article:

Uncertainty. Merriam-Webster may disagree, but for the commercial baking industry, it was — certainly — the word of the year in 2019. Thanks in part to the on-again-off-again trade war with China and improved US employment rates drying up the candidate pool, it’s hard for wholesale bakers to remain fully optimistic when confidence can change at the speed of a Twitter feed.

Baking & Snack’s 2020 Baking Industry Confidence Survey — a triennial study conducted by Kansas City-based Cypress Research — hinted that such uncertainty is causing a bit of industry fatigue. Last year’s Equipment Trends Survey — one of Baking & Snack’s capital-related survey series on a three-year cycle — noted a lot of optimism and plans for capital investments, but the ups and downs of 2019 seem to have left businesses worn out. While the outlook is generally optimistic and gross profit margins are on the positive side of the ledger, respondents to this year’s survey indicated they’re expecting more of a status quo approach to investing in the coming year.

“The sentiment seems to be uncertainty today and more of that in 2020,” said Marjorie Hellmer, president of Cypress Research.

And while the same isn’t great, things aren’t bad, either. Finances are in good shape, the job market is healthy, and economists predict a ­recession-free 2020.

However, broader manufacturing looks slightly different, according to the National Association of Manufacturers (NAM) Q4 survey, which was released in December. Despite strong consumer spending and labor market growth, the NAM survey revealed weakened manufacturing activity and business confidence, with 67.6% of respondents reporting a positive outlook, which was steady from the previous quarter but a significant drop from 89.5% in the Q1 report, which published in March. Commercial baking saw a similar story last year. The 2019 Equipment Trends Survey revealed an overall positive outlook and bakers’ plans to invest in equipment that would support the longevity of their business. But as the year — and the trade war — wore on, attitudes started to shift. As we enter a new year with trade unrest at bay for now, Baking & Snack reveals how baking companies are holding steady amid uncertain waters.

Snapshot of the 2020 baking industry

Participating companies manufacture a variety of baked foods, including, but not limited to, pan bread, buns and rolls (35%); cakes, pies and sweet goods (32%); cookies and crackers (26%); artisan-style bread (19%); and salty snacks (10%). Represented job functions include corporate management or administration (28%), plant operations or production (15%), engineering and maintenance (14%) with technical/R&D, QA and marketing positions comprising the remaining fifteen percent. All respondents play a role in equipment purchasing for their companies from direct purchasing approval to influencing the decision-making process.

It is worth noting that survey fieldwork was conducted prior to the December 2019 announcement regarding “phase one” of the trade agreements with China.

In general, bakers closed out 2019 with a positive economic outlook. In the survey, 86% of participants said they feel the American economy is growing. However, they’re viewing the year ahead through a more critical lens; that number dropped to 77% when asked about optimism for the US economy in 2020.

Specific to the bakery market, though, they’re much more prudent. While 85% said the general outlook for US commercial baking was positive, only 28% predicted the outlook would be better for 2020 compared with 2019. That’s much lower than the 2017 survey, when 54% said their outlook was better for the year ahead than it was in 2016. This year, 66% expect the industry to stay the same, compared with just 41% in 2016.

“That spells fatigue to me,” Ms. Hellmer observed. 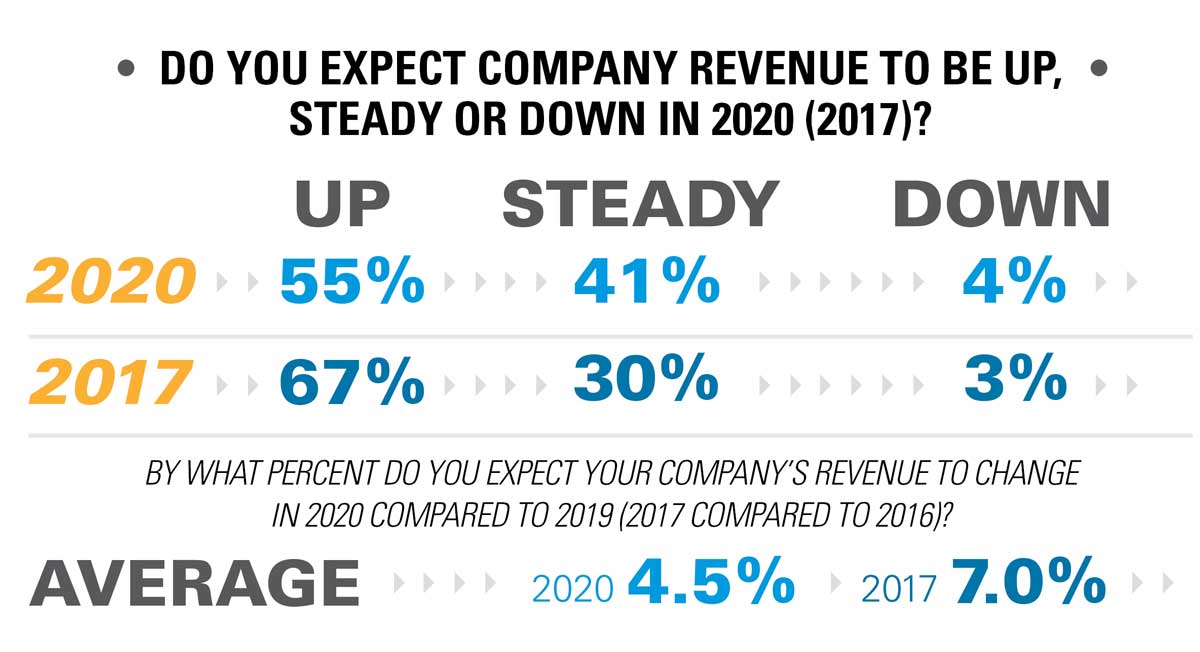 Size and scale could factor into how cautiously bakers are proceeding. According to the NAM report, large manufacturers (those with 500 or more employees by the association’s standard) are more jaded than small and mid-size operations. While NAM chalks that up to the possibility that larger manufacturers are more sensitive to global uncertainties, qualitive responses in Baking & Snack’s survey point to scale, noting that “lethargy” (as one respondent put it) from larger companies provides smaller operators better opportunity to introduce new products.

“There are huge opportunities for small, flexible bakery entrepreneurs,” Ms. Hellmer said. “Larger bakeries can’t get to market that fast when they’re mass producers. They’re more risk-averse because they may not get enough return for that risk.”

Steady as she goes

Uncertainty may have bakers feeling fatigued, but when it comes to their businesses, they’re moving along at a relatively steady pace.

Slightly more bakers closed 2019 expecting costs to be up than they did in the 2017 survey — 51% in 2019 vs. 46% in 2016. Meanwhile, 45% said they’d end the year with costs steady, which was a jump from 39% three years ago. And looking ahead, bakers painted a similar picture: Forty-nine percent expect overall company costs to be up, and 48% expect them to remain steady.

While a larger share of bakers reported higher company costs, according to the 2019 survey, the average cost increase was just under 2% compared with a 3% cost increase in 2016, reflecting that most companies are offsetting costs and keeping their heads safely above water. Although fewer bakers than the last survey cycle reported an expectation for company revenue to be up, there was a sizeable increase in the number of companies expecting revenue to hold steady rather than decline. They expected the average company revenue increase to be around 5% for 2019 and projected a 4.5% increase by the end of 2020. That’s not quite the roughly 7% revenue increases bakers expected during the last survey cycle, but it’s still high enough to maintain a generally positive outlook. Looking forward, 36% of bakers in the survey expect gross margins to be up by the end of 2020, and 54% expect them to remain steady. The average expected gross margin increase was almost 2%. It’s worth noting, however, that in the 2016 survey, respondents projected a 2.7% average gross profit margin increase for the coming year, which was nearly a full percent higher than the 2019 increase. The current decline from 2016’s bullish projection further highlights the climate of uncertainty, and bakers’ desire to play the cautious role of steady Eddie.

“Of course, the more companies that report, ‘Our profit margins are going to be up,’ the more this reflects a healthy industry,” Ms. Hellmer noted. “It means that companies are doing well in managing the cost of sales, allowing more dollars for operations, financing and other costs. The key is holding costs in line.”

In gauging industry confidence, the survey can also be used to understand how baking companies are making capital investments. Given that labor is one of the two primary factors driving industry uncertainty, there’s no surprise that it’s affecting bakers’ capital spending.

In this year’s survey, fewer executives than in 2017 cited plans to reduce or add employees, but the number of bakers holding their staff steady jumped from 39% to 53% for 2020. When asked if it was due to a lack of candidates, 40% of respondents confirmed this is the case, a stark indication of the lack of workers not only inside a bakery but also out in the field. Companies are holding onto employees to keep the workforce going.

“That’s part of the ongoing saga,” Ms. Hellmer said. “Many of these companies have gone through that hard struggle of automation thinning down their number of employees. Now, the only alternative they have left is to hold on to the people they have because the labor market is very tight and because of the broader uncertainty in the industry.”

But what about those capital investments? The survey results seemed more positive than the uncertainty might suggest. After all, 37% described their company’s financial position as “firmly in the black,” and 52% described it as “financially sound,” indicating continued industry stabilization.

Eighty-four percent of respondents made capital investments in 2019, and more than half of the bakers — 58% — actually reported increasing capital spending last year over 2018. What’s more, 86% of bakers noted plans for investments in 2020, which is a 7% increase over the 2017 survey. The next part of the story is what they’re planning to invest in.

“For 2020, it looks like smaller-dollar projects: upgrading or expanding existing facilities and not so much new buildings,” Ms. Hellmer observed. “There’s also a lot more fine-tuning.”

The bulk of capital investments is happening in equipment, and the numbers indicate that companies are more interested in refining their current operating conditions rather than seeking out new ones. Seventy-nine percent of participants noted bakery equipment as investment areas, and 57% — up from 40% in 2017 — identified plant upgrades. Additionally, facility expansion jumped from 31% to 41%, and new construction plummeted from 27% in 2017 to 16% for the upcoming year.

Of equipment spending, a whopping 73% of bakers indicated packaging at the top of the list, followed by makeup/dividing/depositing with 52%. Material handling and warehousing/distribution were tied with 46%.

It wasn’t long ago that fickle consumers were bakers’ biggest worry. Today, they are navigating a foggy path while the trade war with China awaits resolution and they seek new solutions for the shrinking labor pool. In the end, the ambiguity can be summed up by some written comments in this year’s survey: One respondent noted that there’s “nothing” to look forward to while another proclaimed, “2020 is going to be a great year.” We’ll just have to wait and see.