We use cookies to provide you with a better experience. By continuing to browse the site you are agreeing to our use of cookies in accordance with our Cookie Policy.
Home » The future of mixing tech

The future of mixing tech

Beauty may be in the eye of the beholder, but beautiful bread has always been in the hands of the baker. Whether a uniform pan bread made on a high-speed production line or an artisan loaf crafted in a smaller shop, dough development is a critical part of the process. And the mixer plays an integral role.

“Mixing is the most important step in the process,” said Patrick Nagel, key account manager, WP Bakery Group. “It determines final crumb structure of the products, and it influences performance and stability on the makeup equipment and consistency in the products.”

Much has changed in the industry over the past decade or so, and much of that has to do with the workforce seeing fewer “dough heads,” or old-school bakers who instinctively knew how to tweak a formula or process simply by feeling the dough.

“If you go back 10 years ago, there was a lot of ‘feeling.’ People touched the dough,” said Bobby Martin, executive products manager, AMF Bakery Systems. “There’s still some of that today, but as we move toward the future, we’ll have fewer people who will master that technique. It takes time and experience to make the distinction between a good dough and a bad dough.”

Fortunately, advances in mixer technology are helping bakers ensure that the dough going into the oven is as good as the bread coming out the other side.

Let’s start at the very beginning. For bread, every good mix starts out as flour, water, salt and yeast. It’s how those ingredients come together that’s so important.

“Mixing can affect the dough rheology because this is the first place in the process all the ingredients are combined to start the dough development,” Mr. Martin said. Sometimes, the process begins before the first step, and that involves premixing, such as with Bühler Group’s Jet Mix.

“It can prehydrate the flour prior to entering the mixer,” said Kevin Knott, key account manager, Bühler Group. “That gives you a much more homogenous mix and helps increase the amount of water absorption with the flour. It can also reduce the mixing time.”

“For developed doughs, we recommend Roller Bar Mixing technology. Bakers prefer them because of their efficiency in mixing and reduced mix time to make a batch of dough.”

“Via Rapidojet, all dry ingredients are fully hydrated within five minutes,” Mr. Schwenger said. “Gluten development and all mixing tasks are completed after only a fraction of a second of mixing time.”

Zeppelin Systems USA’s DymoMix comes with some broadened applications. “With DymoMix, we can pre-hydrate flour or the entire dry blend of a bread or roll product to feed either a batch mixer or a continuous mixer, reducing the overall kneading time and energy required, reducing the dough temperature, and increasing the hydration level of the dough and the finished product to increase yield,” said Joe Cross, engineering and process manager, Zeppelin Systems USA.

“Through the three-mixing-zone principle, it is possible to add more water to increase dough hydration while still getting a dough that feels dryer on the surface,” Mr. Nagel said.

WP Bakery Group partnered with Kemper for its KRONOS single spiral mixer, which, Mr. Nagel said, offers shorter mixing times as well as high dough quality and consistency from batch to batch. This can lead to better dough development in the mixer and down the line.

When the ingredients come together, it sets off the chain of events toward gluten development.

“At mixing startup, you’re dispersing the ingredients, and as they come together and you create the dough mass, you have to knead it to develop the gluten,” said Damian Morabito, president and chief executive officer of Topos Mondial Corp.

The sequence of ingredients can also impact dough development.

“Am I going to delay my salt addition until the end of the mix?” asked Andrew McGhie, director of sales, Shaffer, a Bundy Baking Solution. “Am I mixing the dry ingredients first and then adding the liquids? Or am I adding some of the liquids early and some late? All these things can affect how the dough develops and the final texture of the product.”

To create a good bread dough, bakers must understand the difference between mixing and kneading.

“Our mixer is uniquely configured to properly knead the dough and not mix it,” Mr. Morabito said. “For proper gluten you want to knead the dough. Kneading is defined as stretching, folding and developing gluten. When the dough runs at too high an RPM, it can rip and tear. You don’t want the dough to wrap around the beater and go for a high-speed ride.”

Mr. Morabito observed that, for example, in a 12-­minute mix, the dough should be kneaded for ­roughly six minutes.

Topos’ configuration of its mixer bowl provides a proper RPM and imparts appropriate kneading. Mr. Morabito suggested that the kneading action, when done properly, is much gentler on the dough and recalled a visual demonstration he once made.

“I took a nickel out and put it on the bumper on the edge of the mixer and said, ‘We’ll make your whole dough, and we won’t knock the nickel off.’ We weren’t anchored to the floor, and that nickel never moved.”

“For bread, there are typical horizontal parallel bars, which we call Y-and-Y,” Mr. Martin said. “There’s also a breaker bar adjustment that we can play with to get it closer — or further away — from the agitator bar, depending on the type of dough.” 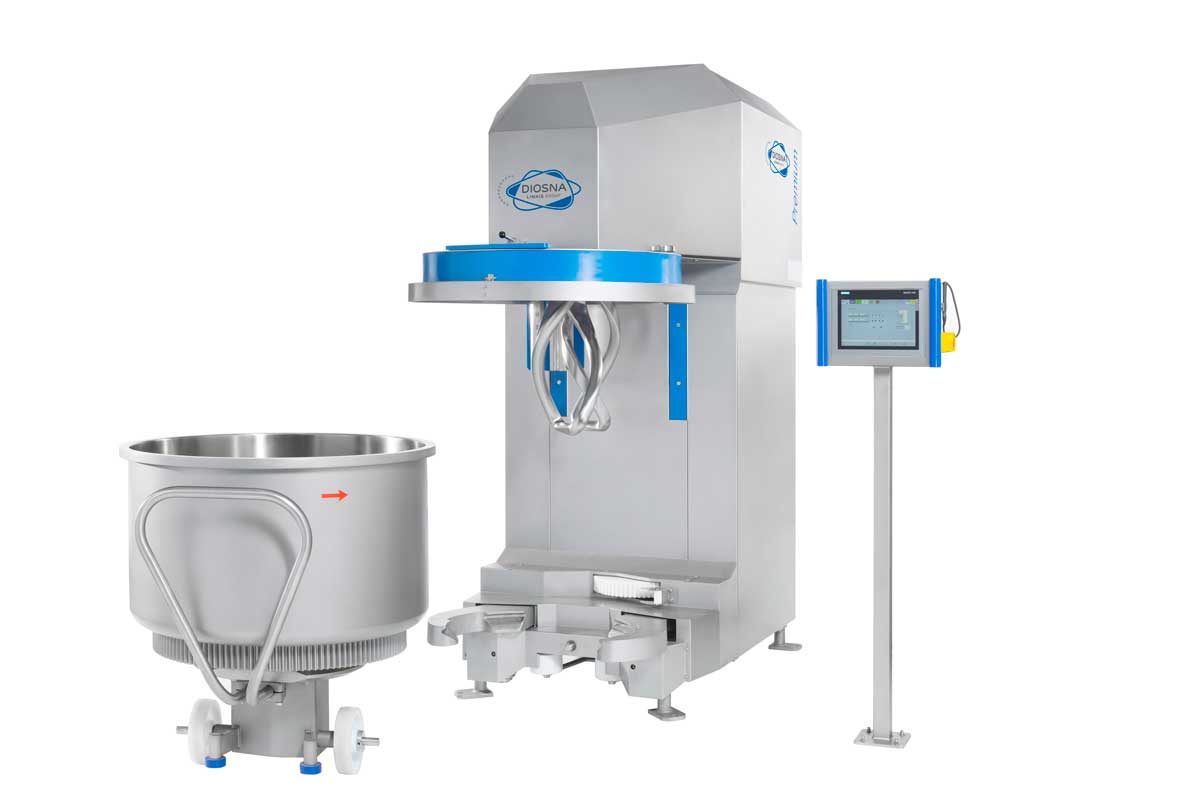 Diosna also placed a focus on kneading in the design of its Wendel mixers, which feature rotating bowls and two counter-rotating wendel kneading attachments. “These attachments rotate in opposite directions and are inserted from above to achieve higher efficiency, reduce dough mixing time and the aw-value,” said Enrico Gamma, general manager, Diosna USA and Canada.

“That creates the particular type of rheology we need,” he said. “The kneading and gluten development affect makeup and determines how effective the proofing will be.”

Additionally, Bühler Group offers batch and continuous mixers, and Mr. Knott has observed many bakers choosing to go the continuous route for its ability to control the kneading action.

“I have seen a trend toward continuous mixing for higher throughputs and flexibility and to control the amount of kneading,” Mr. Knott said. “With a continuous mixer, you have close control over the energy.”

The Codos System from Zeppelin Systems USA also focuses on gently kneading dough in a continuous mixing system that maintains a constant dough temperature and touts an approximate 30% reduction in energy use.

It’s important to note, though, that energy is not the only factor that bakers should seek to maintain.

For the baking process in general, control is the name of the game. For bread dough, that’s especially true in terms of time, temperature and energy, and it starts at the mixer. While bakers must consider how mixing affects dough rheology, some suppliers may argue that modern mixing technology can inherently eliminate that concern.

“The whole concept of measuring properties of dough was, frankly, an attempt to make the process more stable,” said Jim Warren, vice president, Exact Mixing, Reading Bakery Systems (RBS). “In the case of continuous mixing, we’ve done that. Now, the continuous mixer controls the ingredients, the recipe, the temperature and the mix time. The goal of continuous mixing is not to make your product better. The goal is to make the best product all the time.”

Mr. Warren chalked that up to the fact that, in a continuous system, ingredients go into the mix together.

“You’re not adding 1/8 of a pound to 2,000 lbs,” he said. “It’s all one stream, so there’s no question about a continuous mixer’s ability to finely distribute micro ingredients.”

For bread, dough development is a staged process that requires precise control, especially from stage to stage.

“It takes energy to knead the dough,” Mr. Morabito said. “And if you graph that energy, it starts to peak up and take more as the dough is kneaded. When you hit that peak, many mixer suppliers have meters to measure the energy going into the dough. Once you hit the peak, that’s when you’re fully mixed and need to stop.”

When bakers can exert control over the dough, it becomes more consistent, and the benefits go far beyond the mix. “The higher elasticity and extensibility of a dough made in a Diosna Wendel mixer and the makeup of this less sticky dough means it will be easier and more secure,” said Ronald Falkenberg, master baker and sales and application manager, Diosna USA and Canada. “The proofing range will be much higher and the baked products more consistent with better volume because of the hydration increase.”

When it comes to controlling the dough, Mr. Cross noted that continuous mixing creates “unparalleled” consistency.

“CODOS starts with Zeppelin’s expertise in dosing of dry and liquid ingredients, and from there, the equipment is built around the ability to make small changes to production parameters and allow for changing raw ingredient specifications such as day-to-day variations in flour quality,” Mr. Cross said.

“When properly configured, the dough rheology is developing the extensibility and stretching and forming of the dough, and that means you have to develop the gluten within it to do that,” Mr. Morabito said. “And that all goes back to proper kneading.”

According to Mr. Schwenger, the Rapidojet ­technology will impact dough rheology almost immediately thanks to the instant hydration.

Although many bakers are ramping up their throughput, some are actually turning toward smaller, more frequent batches.

“There’s a trend to smaller batches because they’re easier to control dough development, and the producer has more control and flexibility in the next process step,” Mr. Nagel suggested.

Temperature is another critical factor that requires a watchful eye, especially in an automated artisan process.

“Bakers need a more controlled process for this type of bread produced in a semi-industrial setting,” Mr. McGhie said. “They need to have some automation and the ability to control the process to get a consistent outcome.”

This article is an excerpt from the April 2020 issue of Baking & Snack. To read the entire feature on mixing, click here.