We use cookies to provide you with a better experience. By continuing to browse the site you are agreeing to our use of cookies in accordance with our Cookie Policy.
Home » Pandemic pushes e-commerce back into spotlight

Pandemic pushes e-commerce back into spotlight

Not long ago — mere months, in fact — online groceries were on the radar but nowhere near hitting their stride. Of course, Amazon’s 2017 acquisition of Whole Foods was the game-changer that accelerated the click-and-collect trends for retailers such as Target and Walmart. But when the coronavirus (COVID-19) was declared a pandemic, traditional consumers quickly shifted their shopping method.

Stay-at-home orders across the country allowed brick-and-mortar food retailers to remain open as essential businesses, but still, many consumers are choosing to purchase food from home. This “new normal” is no doubt changing the retail landscape, especially for fresh products that weren’t previously favored as remote purchases, but it also comes with a new set of challenges.

As people settle into new eating and purchasing habits, baking and snack companies will have new retail roads to navigate.

When the pandemic hit, Nielsen data showed, unsurprisingly, a massive rise in e-commerce for CPG products that ranged from household cleaning items to nonperishable foods. In fact, the research firm called it “unprecedented” as the week ending March 14 showed a 91% increase over the previous year for CPG sales online vs. in store purchases at 45%.

Food Business News reported that, according to research from CivicScience, consumers ordering more food online nearly quadrupled from 11% on March 1 to 41% on March 22.

With around 40% of Americans urged to stay home starting in March, CivicScience’s survey asked participants how concerned they were about being in public spaces. In the three-week study, the number of people “very concerned” went from 17% to 53%, while those reporting “not at all concerned” plummeted from 30% to 9%.

Much of this increase has come from relatively new or first-time users of online grocery platforms. And the shoppers aren’t the only new players to this game. Small regional retail outlets that could not sustain enough foot traffic to keep their doors open during stay-at-home orders shifted their business to online-only, said Anne-Marie Roerink, president, 210 Analytics, during an April 6 International Dairy-Deli-Bakery Association (IDDBA) webinar. 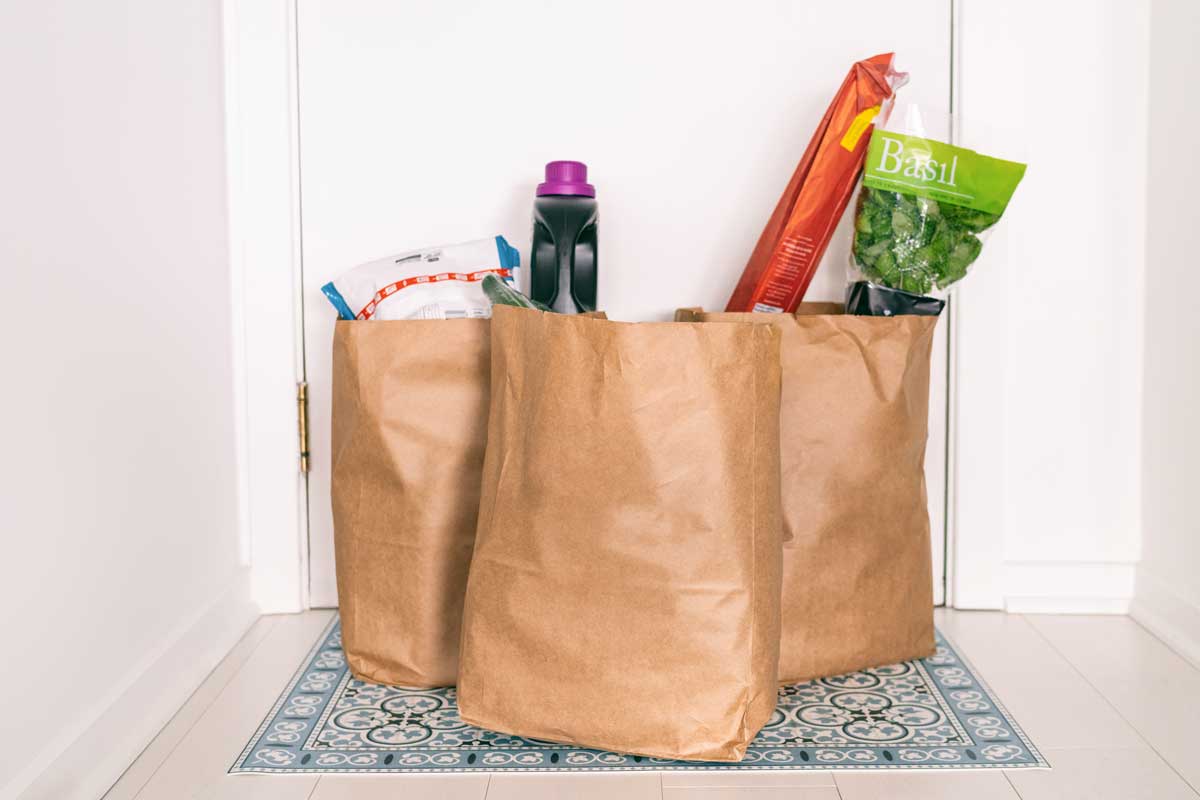 CivicScience also discovered a correlation between online shopping and a concern about being out in ­public. Out of 702 respondents who indicated they are shopping online for groceries more, 56% said they were “very concerned” about being in public spaces.

Despite Nielsen’s reported $8.5 billion CPG sales increase — online and in store — COVID-19 is rapidly changing how Americans live their day-to-day lives, and that’s reflected in sales data for certain categories.

As the pandemic wears on, IRI data suggests that total store sales may no longer be elevated by the runs on non-edible products such as paper goods and household items.

She indicated that at the end of March, IRI data showed an almost 67% increase in dollar sales for food and beverage e-commerce over the same time the previous year.

“Click-and-collect is the difference maker,” she said, noting that this type of fulfillment directly from the retailer for in-person pickup accounted for 77% of food and beverage online purchases. About 23%, she noted, were for local delivery or shipping.

“When we’re talking about fresh food, it’s retailer-driven,” Ms. Parker said. “That’s not to say that Instacart or Amazon Prime aren’t important — they are — but in the grander scheme of things, folks are looking for the store to fulfill their needs because there’s a trust factor, especially with fresh food.”

The pandemic is not only a health crisis but also an economic one. While the far-reaching financial effects are yet to be fully realized, early indicators can be seen in how brand loyalties are shifting across several categories.

AlixPartners, a management consulting firm specializing in go-to-market strategies, recently released a consumer products pulse survey that included more than 1,000 consumers 18 years and older. In that study, 17% of respondents indicated they tried different brands for bread and other baked products, and 20% said they had tried the private-label versions. While out-of-stock was the primary driver, 30% said cost was also a factor. Economic fallout from the stay-at-home orders will likely drive that number up even further in the weeks ahead.

56% of young people, 43% of middle-aged people and even 25% of those 55 or older have increased their online grocery shopping.
- AlixPartners

In IDDBA’s April 16 webinar, Ms. Parker noted that more than a third (34%) of consumers said they plan to spend part their CARES stimulus money on everyday essentials including groceries, though it may not be an immediate boost to the food and beverage sector as people will put that money first and foremost into paying rent or mortgage and adding it to savings.

Much of the motivation to shop online has come from COVID-19, but where and how consumers shop can have multiple factors. For online grocery purchases, AlixPartners broke down the numbers by income. While 57% of respondents who reported using Amazon had an annual income of $100,000 or more, those who made less than $50,000 a year dominated Walmart Grocery at 41%.

Age also appears to be a factor with online purchasing: AlixPartners noted that 57% of consumers ages 18-34 have increased their online shopping during the COVID-19 pandemic.

During a SNAC International webinar, Ms. Lyons Wyatt noted this demographic is purchasing snacks across all channels. However, e-commerce, with a smaller base, has seen some big wins, even before COVID-19 hit. In the 52 weeks ending Dec. 29, 2019, traditional grocery saw 2% growth. As the largest channel in the snack category, that’s a sizeable gain. On the flip side, e-commerce experienced 32% growth for the same 52 weeks, and that was nearly two months before shelter-in-place.

As the value propositions at grocery, mass club and dollar stores gain importance with a massive recession waiting in the wings, those retailers can leverage click-and-collect as consumers get used to buying from home.

“And the delivery sites like Instacart and Shipt grew 58%,” Ms. Lyons Wyatt said. “And a multi-category sites like Amazon Prime or Amazon Fresh saw overall 22% growth.”

Data from IRI during a comparable timeframe supports the assertions that fear over the COVID-19 spread lured more shoppers to online platforms. And for those first-timers, much of their future behavior is riding on that first experience.

As the panic-buying for the non-consumable household items abates, food purchases could potentially reclaim the front seat in the near future, especially if that initial experience was a positive one.

The problem has been with the rush to purchase by consumers across the country shopping from home. Food Business News reported data from Apptopia that mobile apps like Instacart, Walmart Grocery and Shipt more than doubled in downloads during the first half of March and that the Mercato platform saw a 1,200% increase in its retailers’ account registrations from February to March.

Surges like that are sure to cause serious bottlenecks. To control it, some platforms such as Peapod, owned by Ahold Delhaize, which operates Stop and Shop stores, added computer server bandwidth to handle the traffic, according to Food Business News.

On the manufacturing side of things, commercial bakers and snack producers have their work cut out for them with increased demand coming from myriad channels and facing even more potential workforce shortages as the virus extends its reach across the country.

For the time being, year-over-year purchasing data could become moot in this time of unprecedented uncertainty as medical, business and manufacturing communities work to flatten the virus’ curve and resuscitate the economy.

Until then, e-commerce, with its potential to ­skyrocket, remains the channel to watch.