We use cookies to provide you with a better experience. By continuing to browse the site you are agreeing to our use of cookies in accordance with our Cookie Policy.
Skip To Content
Home » Slideshow: Company makes pretzels in its own ‘unique’ way

Slideshow: Company makes pretzels in its own ‘unique’ way

When it comes to pretzel-making, the Spannuth family has a history that they proudly claim as unique. On UniqueSnacks.com, consumers can relive the lighthearted tales of how Spannuth pretzel-makers may have — but probably not — influenced history from back in the days of Napoleon and Beethoven to the discovery of its signature Sprouted pretzels and Shells within the last decade.

Officially founded as Unique Pretzels in 1921, the Reading, Pa.-based company will celebrate its centennial with a commemorative tin that highlights the family’s legacy and a 4-minute video that takes viewers down memory lane and explains what makes the business so different from others in the snack industry.

“Why did we get incorporated as Unique?” asked Justin Spannuth, vice president and chief operating officer, in the video. “I have no idea, but what a neat challenge. It is a name to live up to. It doesn’t allow you to settle. You have to say, ‘What will make it stand out not for one year or two years? What will make it stand out for a long time? What makes it almost impossible to duplicate?’ There’s a lot of things that make us unique, for sure. The ability to make things that nobody else can make is really cool.”

As a member of a family-owned company, Justin Spannuth represents the sixth generation involved with the pretzel business along with his brother Bill, who’s vice president and chief financial officer. Their father William Spannuth comes from the fifth generation and is president of the company while several members of the seventh generation are now involved.

Justin Spannuth noted that the Splits, however, are a “completely different animal.” They require precise front-end controls and a strict, standardized process. He added that it took two years before the bakery figured out how to produce the Splits on the newer Reading Bakery System (RBS) mesh oven, which features a hybrid of convection and radiant heat. Even the humidity and ambient temperature inside the plant can impact product quality. 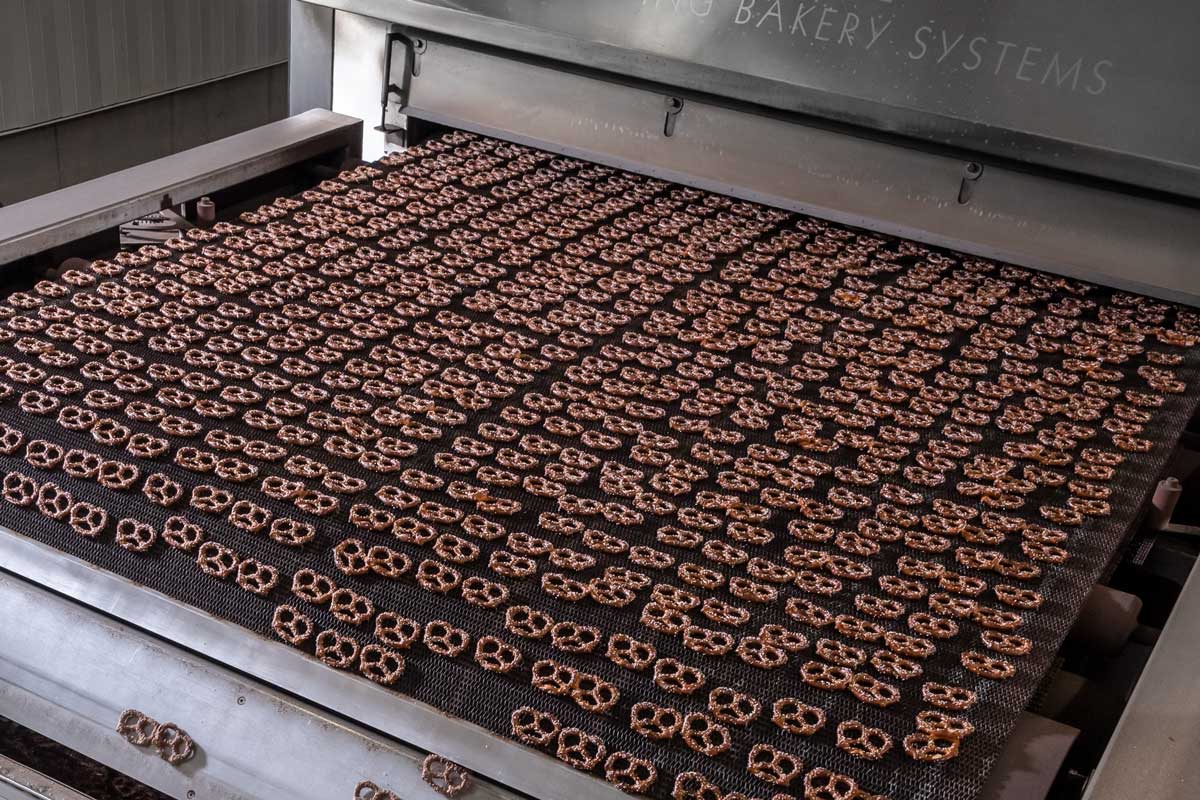 Overall, production runs on three, 8-hour shifts five days a week. Every couple of weekends, however, the bakery will run for 12 straight days, followed by sanitation and maintenance, to build inventory on its top-selling items.

Built in 2013, the newer 73,000-square-foot facility houses a single high-speed pretzel line that cranks out Original Splits and Shells, as well as sprouted items.

Adding production of a new snack variety could happen if the volume warrants bringing it in-house.

Upgrading ingredient handling is also on the agenda. The facility currently has two, 90,000-lb flour silos — one for each production line. Oil, salt and other minor ingredients currently come in totes with the option to graduate to bulk systems after installing the additional lines. 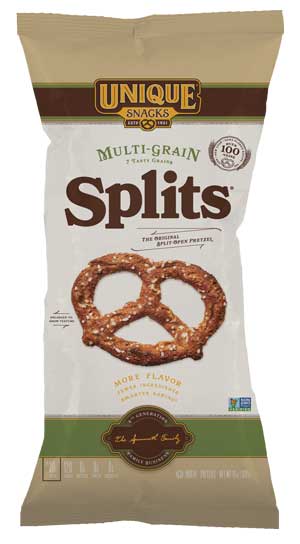 “There is no pretzel in the market like it,” Justin Spannuth said. “It’s 100% whole grain with no added sugar. Because we add no sugar, you know the seed was germinated and has that breakdown from a complex carb to a simple carb. In doing so, that pretzel digests more like a vegetable. It’s more like the carbs you find in a carrot, not the carbs found in flour or grains that people consider ‘carbs.’ ”

On the newer RBS production line, a Peerless 800-lb. horizontal mixer develops smaller batches of the stiff pretzel dough. After it’s dumped into troughs, the dough is manually chunked before it’s loaded into the hopper of the extruder and band-cutter that forms the classic twisted-shaped Splits.

The RBS pretzel line also produces a dough sheet for cutting and creating its Shell products.

After the proprietary makeup process, the Splits pretzels enter the proofing chamber followed by a caustic bath with a slightly higher pH for an extended period to generate the distinctive texture and eventual color of the pretzels during baking.

“The proof time, temperature and humidity are all key factors, and the percentage of caustic and dwell time under the bath are major elements,” Justin Spannuth explained. “Another major element is the dough set-up time. The baking process is so sensitive. Our Splits product is absolutely the hardest pretzel in the world to make.”

For instance, on a batch containing 1,000 lbs of flour, less than of a pinch of yeast might change the product’s characteristics. That’s why Justin Spannuth described the Splits as often imitated and never duplicated.

“The typical pretzel is very easy to make,” he added. “Our Shells products, which are innovative with great flavor, are also simple to make.”

“Sometimes if our pretzels are over-split at the end of oven, that means they’ve likely picked up too much moisture,” Justin Spannuth said. “If you can’t bake it out due to hitting your color parameters, there’s going to be too much moisture in the dryer, and the product will shrivel and become extremely hard.”

After kilning, which dries out and “cures” the pretzels during cooling, they travel to multi-headed Yamato scales and Hayssen vertical form/fill/seal baggers and Lock metal detection by conveyor. Unique Snacks offers larger 16-oz bags for Splits and Shells, 10- to 11-oz bags for all its pretzels and 2.1-oz packs for c-store and single-serve.

Currently, the company is pursuing SQF certification for food safety that was delayed due to restrictions caused by the pandemic, which also promoted heightened food- and worker-safety protocols. In addition to checking people’s temperatures and other safety procedures, the company bought sterilization sprayers and purchased PPE from local companies who shifted their business models to making masks in response to a downturn in their businesses.

Unique Snacks also hired 20 temporary employees to relieve line operators if someone felt too ill to come to work.

Moreover, Unique Snacks provided employees a $2 raise during the first 10 weeks of the pandemic and purchased meal kits, as well as soaps, sanitizers and paper goods from local restaurant suppliers whose businesses had experienced a downturn.

For Justin Spannuth, it’s just one of the many ways in which the snack producer has become a leader that supports the local community. Make no mistake about it, he added. That’s just part of why this snack company is unique in so many ways.

“We really try to be everywhere, so our employees are proud knowing that the products they make are everywhere,” he said. “Our strength of support is supplying products to nearly every local event and charity, as well as sitting on committees and chambers of commerce of our local family business groups.”

Heading forward, Unique Snacks is looking for new ways to expand its market presence. Justin Spannuth pointed out its direct-to-consumer business is projected to top the $1 million mark this year.

And who knows what the next humorous milestones — or new snacks in addition to pretzels — will emerge as the company enters its second century of business?

Only history — and family lore — will tell.

This article is an excerpt from the October 2020 issue of Baking & Snack. To read the entire feature on Unique Snacks, click here.