We use cookies to provide you with a better experience. By continuing to browse the site you are agreeing to our use of cookies in accordance with our Cookie Policy.
Home » Bakers earmarking more capital spending in 2021

Now that 2020 is over, baking industry executives are looking to spin the wheels and leave last year in the dust when it comes to investing in the future of their companies and their operations.

For the past five years, various iterations of the annual survey have reflected a steady, if not accelerating, growth sentiment when it comes to capital spending. Despite the detours, speedbumps and everything else that has happened during the past 12 months, most baking executives involved in determining their companies’ capital spending expect the long-term growth trend to continue.

Many of them also plan to put the pedal to the metal as they hit what they hope will be a more open straightaway going forward.

“If you look at last year’s capital investment projections and plans, the industry was in a growth period before the pandemic,” noted Marjorie Hellmer, president of Cypress Research, the Kansas City, Mo., firm that has conducted Baking & Snack’s capital spending studies for more than two decades. “What the data are showing this year is a continuation of that growth trend and an acceleration of investments amid companies whose priorities include expansion and identifying additional options to generate more profit.”

Specifically, the 2021 study outlines projections for even higher levels of investment in 2021 than 2020 spending.

Bakers reported that in 2020, their companies spent an average of 8.4% of annual revenue on capital projects. Ms. Hellmer said bakery manufacturers have earmarked an average of 10.8% of company revenue for 2021 capital investments, which signals a clear pent-up demand for upgrading and expanding their operations. 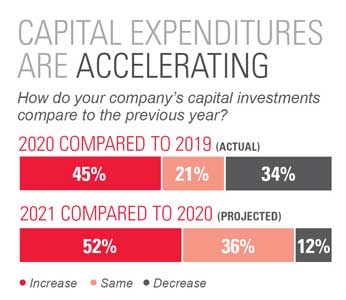 But let’s look at another key data point that further highlights this acceleration in this exclusive industry study in partnership with BEMA. In the current survey, respondents were asked how companies’ actual 2020 overall capital investments compared with 2019.

Despite the 2020 pandemic and its impact on the economy and bakery operations, the survey revealed that 45% of mid- to large-sized baking companies actually increased their capital expenditures over 2019 levels while 21% held them steady and 34% decreased spending.

When asked for 2021 projections compared to 2020 investment levels, the percentage of those planning to boost their spending rises to 52% while 36% plan to keep investment levels the same. However, here’s the kicker. Only 12% expect to decrease their 2021 capital spending plans from 2020 levels, compared to 34% who expected a decrease in 2020 from their 2019 levels.

These findings suggest that baking executives have drawn a new map for navigating success for their companies after a tumultuous year.

On many other levels, these numbers aren’t surprising. Many bakeries have had to raise overall capital spending to enhance safety protocols during the pandemic while others, particularly bakeries serving retailers, needed to invest to meet capacity for the surge in supermarket and eating-at-home sales. Meanwhile, bakeries that serve foodservice and in-store bakeries with frozen baked goods have had to pivot toward new retail or even direct-to-consumer and other online opportunities. Those shifts required further capital investments for their operations.

As a result, these trends suggest that executives see a need for greater capital spending in 2021. This is also due, in part, to the reality that many bakeries were unable to add equipment for myriad reasons, ranging from safety regulations that prevented outside technicians from entering facilities for installations to a backlog of orders, especially for packaging equipment.

Nevertheless, as the economy recovers, especially within the travel and foodservice industries, there could be an even greater amount of investment flowing into equipment spending toward the second half of this year as the traditionally conservative baking industry sees the roadway to profitability open up further.

“It’s good to see this level of planned capital spending in the baking industry,” Ms. Hellmer said. “During the last decade, the story has been struggle, struggle, struggle to reinvest. We’re in a really healthy period of expansion.” 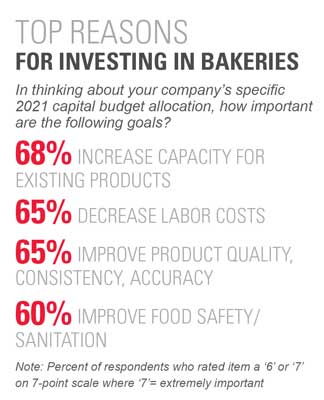 Cypress Research has analyzed insights from 174 baking professionals involved in equipment-related purchases for their companies. The research firm, which has been conducting capital investment surveys for more than 20 years, focuses on bakery manufacturers and screens out all industry vendors, suppliers and those not employed in a bakery setting.

“It’s one of the most targeted studies we do in the baking industry,” Ms. Hellmer explained. “We have to target very specific decision-makers and influencers within these companies at both the plant and corporate levels who are involved in capital investing plans. That is a very select group.”

To obtain a clear picture of significant capital spending, the survey also eliminates commercial bakeries with less than $10 million in annual sales and focuses on those mid-size and larger regional, national and multinational baking and snack companies.

Additionally, 2021 marks the first year Baking & Snack has partnered with BEMA, which sponsored the industry study and provided an additional layer of equipment-based expertise for this annual industry-benchmarking survey.

“It is a tool that has long been used by our association’s members to help gauge the future of the equipment business, and it’s one of the best industry tools we have for looking at the future of capital spending,” Mr. Brown said.

During the past year, the association launched its BEMA Intel platform aimed at compiling comprehensive data that help bakery manufacturers and suppliers understand the health of the US baking industry on a regular basis.

For more information on the capital spending survey and BEMA Intel, visit www.BEMA.org.

This article is an excerpt from the February 2021 issue of Baking & Snack. To read the entire feature on capital spending survey, click here.