CHICAGO — Cupcakes and donuts packages bearing the Oreo brand loom on the horizon as Mondelez International, Inc. moves to become a major player in the cakes and pastries market, said Dirk Van de Put, chairman and chief executive officer. With recent acquisitions, the company is poised to become the world’s third largest cake company, he said.

During a July 27 conference call with investment analysts, Mr. Van de Put discussed Mondelez’s recently announced agreement to acquire Chipita, a European maker of cakes and croissants. He described the attractiveness of the cake category and steps the company already is taking to make the sector a meaningful part of Mondelez’s future.

Mondelez in late May announced plans to acquire Chipita for about $850 million. A year earlier, Mondelez completed the acquisition of Give & Go Prepared Foods Corp., a supplier of baked foods to in-store bakeries.

“We are also increasing our foothold in adjacent categories like cakes and pastries, where we are now realizing the potential of acquisitions like Give & Go in North America,” Mr. Van de Put said during the July 27 call.

“This is a $65 billion category, growing at or above the rate of our core snacks categories,” he said. “It also has attractive profitability. Both cakes and pastries typically have a higher net revenue per kilogram than cookies. It is a close adjacency to our core biscuit capabilities, and it is a fragmented category, which provides a clear opportunity for a company with the right brands and capabilities to gain a leadership position. The No. 1 and No. 2 players have a market share below 10%, and following the acquisition of Chipita, we will be the No. 3 player. And finally, we believe we can add value and premiumize the category by leveraging our brands.”

With Give & Go, Mondelez already “expanded from our core cookies into cupcakes, donuts and more,” he said. Other Mondelez brands also will be leveraged with opportunities in the company’s new categories, he said. 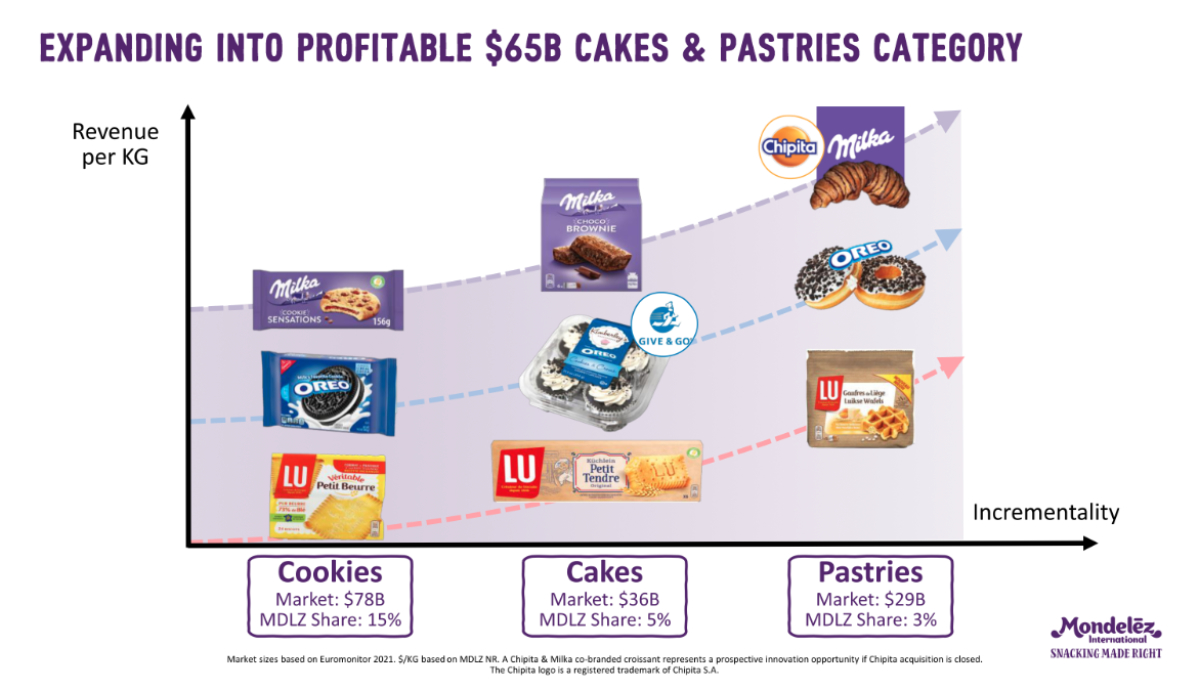 “That includes the well beloved Petit Beurre biscuit reimagined as a soft cake,” he said. “And recently, the brand is expanding even further into waffles in the highly incremental pastries space.”

“Milka has now expanded into soft cakes like brownies and will soon expand into croissants through the Chipita acquisition,” he said. “And you can imagine we will do the same with Cadbury in the countries where Cadbury is our main chocolate brand. We firmly believe that the leadership position in the cakes and pastries category can contribute to an accelerated growth rate for our company. And between our core brands and recent acquisitions, we have the tools to succeed.”

Speaking specifically about Chipita, Mr. Van de Put said the company has $600 million in sales with annual growth in the high single digits. Its portfolio of brands is led by 7Days, and the company’s sales are centered in Europe and emerging markets but with strong potential to expand its presence in many other geographies.

“The portfolio is predominantly prepackaged croissants, which give us greater exposure to the breakfast or pre-lunch consumption occasion,” Mr. Van de Put said. “We have clear revenue synergies with Chipita including distribution and co-branding, and we believe there is other attractive innovation in the pipeline. We also expect to realize efficiency opportunities.”