Strike weighs on Mondelez US 2021 results

Hangover effects from a work stoppage in the company’s third quarter weighed on North America results in the fourth quarter and for the full year. 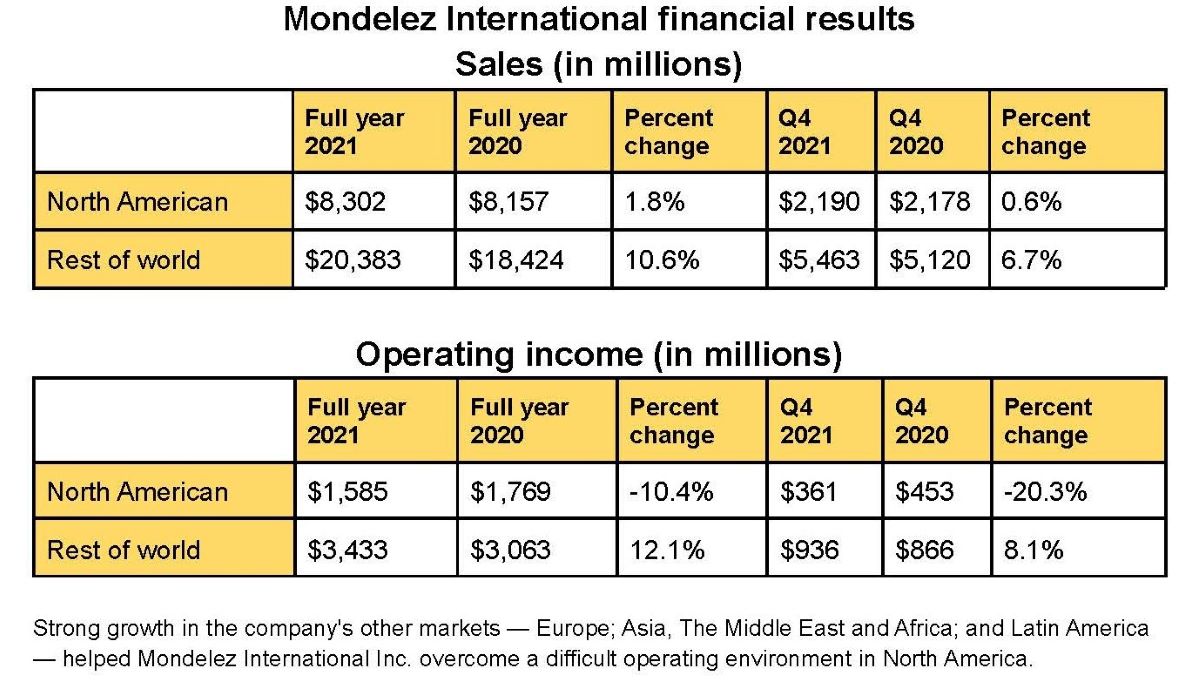 While the company was able to mitigate the third-quarter effects of an Aug. 10-Sept. 18 strike at Nabisco plants, management had warned that the stoppage took a toll on inventories. Efforts to rebuild inventories have been hampered by supply chain difficulties.

The effects of the strike, global inflation and supply chain challenges were the subject of extensive discussion in a Jan. 27 management conference call with investment analysts. One analyst noted that the limp sales results in the fourth quarter appeared at odds with robust demand during the period indicated in Nielsen retail data.

Mr. Van de Put said Mondelez has not been able to fully resupply customers during the period and noted that sales in 2021 were strong relative to 2019.

“Demand remains very robust, but our growth that you see is impacted by supply chain constraints and phasing of some of the price actions,” he said. “And so in between those is our inventory, of course. And if you look at North America, we grew or we were flat for the year, let’s say. But for a two-year CAGR (compound annual growth rate), we’re at 4%, which is still quite strong.

“If you look at the last quarters, we had the strike in Q3, which left us with low inventory levels. And although improving, it’s going slower than you would normally expect because of all the supply chain disruption that everybody is experiencing. And so we think that we will still continue to see on shelf effects from the strike throughout Q1.”

“Those external manufacturers are facing labor challenges, and we expect also that we will continue to see some pressures in that area, at least for Q1,” he said.

He noted that price increases announced for Jan. 1 were not yet reflected in 2021 results but will be helpful in the new year.

“As we look at Q1, we expect the top line in North America to improve,” Mr. Van de Put said. “The margins will also improve, but it's going to be sequentially.”

The fourth quarter was not without positives in North America.

“The pandemic continues to fuel the desire for comfort and indulgence, benefiting our categories and trusted brands,” Mr. Van de Put said. “And overall, as we found in our State of Snacking Survey released last week, the tendency for daily snacking is up for a third consecutive year. And although 70% of global consumers report concerns about inflation, it has done little to date to change their grocery shopping behavior.”

Looking forward, Mondelez should benefit from consumers’ continued proclivity to eat at home, Mr. Van de Put said. He cited data indicating 60% of US adults do not intend to eat out more in 2022 than they did in 2021.

“This positions our core biscuits and chocolate portfolios well as they are skewed toward in-home consumption,” he said.

“We also grew our presence in the premium biscuit space with double-digit growth led by Tate’s, which we successfully transitioned to direct-store delivery,” he said. “Additionally, we expanded our presence in close-in adjacencies, such as baked snacks with the successful integration of Give & Go.”

Both Oreo and Chips Ahoy! enjoyed strong sales growth in the fourth quarter, he said.

While non-US markets enjoyed sales and earnings growth, the Mondelez executives said the challenges of inflationary pressures were not limited to North America.