We use cookies to provide you with a better experience. By continuing to browse the site you are agreeing to our use of cookies in accordance with our Cookie Policy.
Skip To Content
Home » Pro Tip: Electrostatic interactions help understand protein functionality

Like magnets, positive regions repel one another and are attracted to negative regions, and the opposite is also true. The electrostatic forces on a protein are most commonly measured by using a machine to obtain the zeta potential, typically measured by dispersing protein in water. These machines apply a positive or negative charge at one end of a plastic tube and measure how fast particles move towards that side. This quantifies how strong the charge on the protein is. 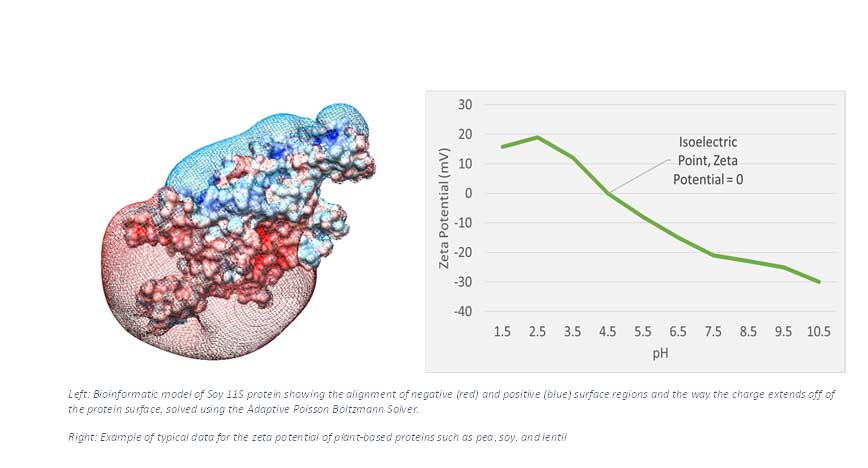 As the pH of the solution is changed, the zeta potential becomes more or less positively charged above and below the protein’s isoelectric point, or where the zeta potential is 0. This is an important point for product developers. For example, plant-based proteins such as lentil and pea are used as emulsifiers because the proteins attach to the surface of oil droplets. For the emulsion to remain stable, and prevent the oil droplets from coming together, the zeta potential must be highly negative or positive, which can be accomplished by changing the pH of the emulsion. When the charges on a protein’s surface are the same, the proteins attached to oil droplets will tend to repel each other, adding to emulsion stability.

In baking, these repulsive forces are part of the changes seen during proofing. As the pH decreases during fermentation, the disulfide bound glutenin proteins become more negative and repel each other, slightly weakening the gluten matrix. This is part of the reason that dough becomes more prone to collapse during fermentation and requires emulsifiers to help stabilize the rising dough!