BOICEVILLE, NY. — Bread Alone Bakery has reopened its Boiceville Bakery & Cafe as an 8,000-square-foot net-zero energy facility. According to the company the facility is the first commercial bakery in the United States to operate on 100% renewable energy, without fossil fuels.

Bread Alone said the new facility is a “revitalization” of the company’s original bakery that first opened its doors in 1983. Nearly 40 years later, the facility now will operate as both a commercial bakery and cafe. It will supply Bread Alone’s four Hudson Valley cafes as well as its New York City farmer’s markets.

The bakery features a 366kW on-site solar array that will allow Bread Alone to renewably produce all energy on-site that it consumes. The renewable energy will be to power the fully electrified building, including Heuft electric ovens, induction stovetops, air source heat pumps and engineered air flow. In addition, Bread Alone said it will bake bread in its original Andre Lefort wood-fired brick ovens, fueled by renewable scrap wood. 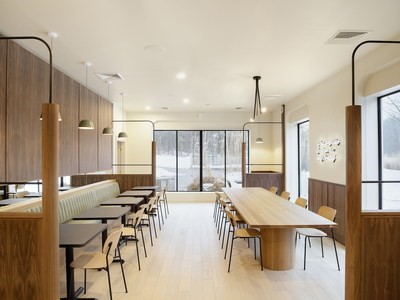 “This net-zero, carbon neutral project is a response to the call for action, and we hope it is an inspiration to others to take actions of their own,” said Nels Leader, chief executive officer and founding family member of Bread Alone. “Bread Alone has committed to the simple but ambitious purpose of creating equity for our people and minimizing harm to the planet. This project is an exciting milestone in pursuit of our purpose.”

Bread Alone said the Boiceville bakery will bake with grain that is grown and milled in the region and will cook with ingredients from regional producers. Meanwhile, the company will continue to bake organic bread for wholesale distribution across the northeast region at its headquarters in Kingston, NY.