We use cookies to provide you with a better experience. By continuing to browse the site you are agreeing to our use of cookies in accordance with our Cookie Policy.
Home » Stellar Snacks offering an upgraded pretzel experience

LAS VEGAS – Stellar Snacks made its debut at the Winter Fancy Foods show held Feb. 6 to 8 in Las Vegas. The branded line of pretzels is the brainchild of Elisabeth Galvin, owner of Delyse Inc., a private label manufacturer of snacks, including pretzels, for the retail and commercial transportation categories.

The new line has four varieties — simply stellar, bold and herby, Maui monk, and sweet and sparky — and are formulated with vegan butter. A few of the varieties are sweetened with monk fruit extract.

“This will help make us one of the biggest manufacturers of pretzels in the country,” Ms. Galvin said during an interview at the show. 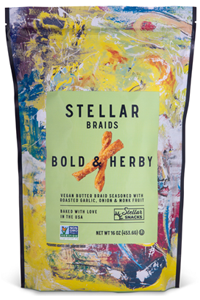 Stellar Snacks packages feature the works of young artists.The Stellar Snacks launch is Ms. Galvin’s effort to move into the consumer packaged goods space and offer a snack brand perceived as premium and better-for-you. Differentiating the brand from competitors is the use of vegan butter in the formulation, the fact that the products are seasoned on the line during processing as opposed to post-processing and the packaging, Ms. Galvin said.

Ms. Galvin’s daughter, Gina, is a part of the business and played a role in prototyping, refining the formulation, and developing the packaging. A recent graduate of Loyola Marymount University, Gina would provide samples to classmates and then collect their feedback. The feedback led to the final formulation and contributed to the decision to offer consumers a snack perceived as better-for-you.

“I think when you look at the trends, people like to have a better-for-your product during the pandemic,” Elisabeth said.

The line made its debut at Whole Foods Market in Florida in November and is being rolled out to other retailers like Central Market/HEB, Mariano’s, Ralph’s, Cost Plus and CVS. Elisabeth said she was particularly pleased the line is being merchandised in CVS’s better-for-you section of stores. The section was launched in 2015 and is now nationwide. It is intended to be a curated selection of better-for-you brands that makes healthy eating on-the-go convenient and affordable, according to CVS. 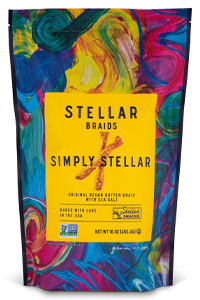 Helping Stellar Snacks standout on store shelves is the packaging, which features the works of young artists.

“It was my daughter’s idea,” Elisabeth said. “She wanted to put artists on the bags, and we tested it and got an overwhelming response.”

Consumers who scan and follow a QR code on packages will be taken to a gallery of artist’s works on Instagram.

“It’s different,” Elisabeth said. “It promotes artists people may have never heard of and it gives our customers a unique opportunity.”

Next steps for the new brand are to continue adding distribution and the launch of two gluten-free stock-keeping units. Additional varieties and snack applications are in development, Elisabeth said, but the priority is getting Stellar Snacks into more stores.