WASHINGTON — Already in decline before COVID, on-premises dining in recent months accounted for less than a fifth of all restaurant traffic, said Hudson Riehle, senior vice president of the National Restaurant Association, Washington.

At the US Department of Agriculture Outlook Forum Feb. 24, Mr. Riehle offered insights on changes in the restaurant business. He participated in a panel that examined consumer eating trends and the price outlook for foods for 2022.

While an increase in food delivery “gets a lot of discussion and is very important to various operators,” it is drive-thru that has been the greatest beneficiary of the flight from eating within restaurants, Mr. Riehle said.

“Part of the reason the off-premises market has been able to do so well in the pandemic environment has been a greater focus on technology,” Mr. Riehle said.

Before the pandemic, about 5% of restaurant orders were digital. Since then, the figure has moved as high as 20%, he said. 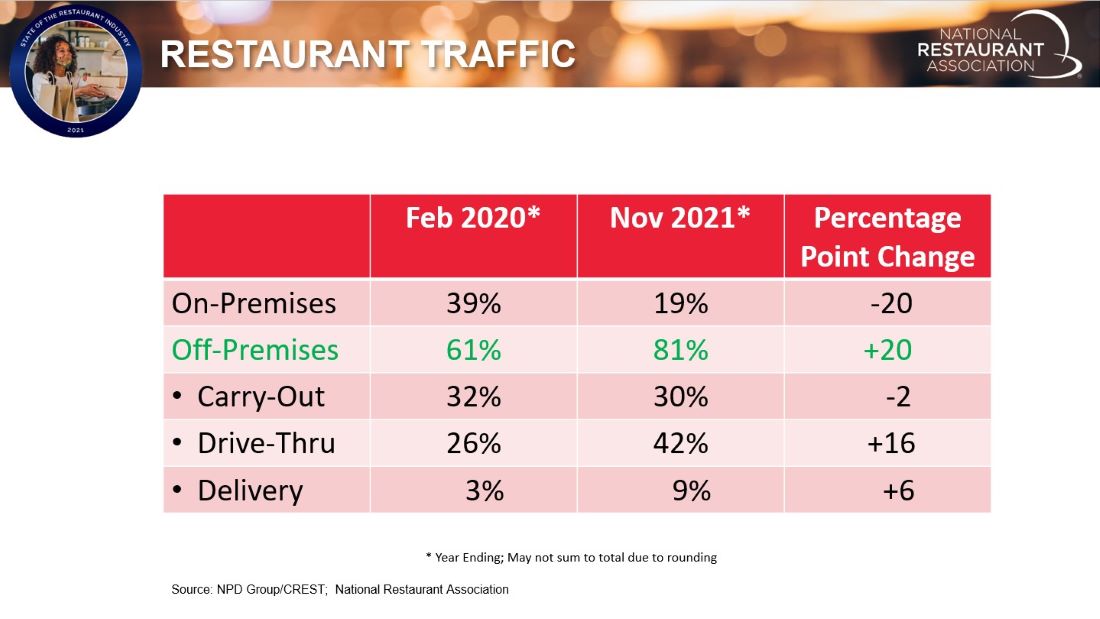 Recruiting employees was the single largest challenge facing restaurant operators in December 2021, cited by 61% of survey respondents, Mr. Riehle said. Food costs were second, at 20%. He said hourly labor costs rose 8.6% in 2021, by far the highest level in the last 10 years, when annual hourly earnings of restaurant employees rose between 1.5% and 4.4% per year.

“For 2022, the industry will continue to improve, but it’s very important to remember that 2022 will definitely be another year of transition for the restaurant industry,” he said.

Among reasons for his caution, Mr. Riehle noted nonfarm employment is still down 3.6 million jobs from the start of the pandemic. He described overall employment as a key metric for predicting the outlook for restaurant sales.

“The reason that’s important for the restaurant industry is because when somebody is employed, they have less time for at-home meal preparation and also have additional income to support restaurant spend,” he said.

Similarly, weak trends in travel and tourism are a factor holding back the recovery in restaurant business, Mr. Riehle said.

In the absence of external factors such as the emergence of another variant, supply chain difficulties will ease in the second half of 2022, predicted Andrew Harig, vice president of tax, trade, sustainability and policy development at FMI — The Food Industry Association, Arlington, Va.

“(Barring such factors), we’ll see supply chains start to catch up and we’ll see some of the shortages ease and some of the pressure on the industry and on consumers, relax a little bit,” Mr. Harig said. “That will set the stage for inflation to follow suit. It’ll lag a little behind.”

It would be an understatement to say such relief would be welcome, Mr. Harig said. He called 2021 one of the most difficult years the consumer-packaged foods business has ever faced.

“In some ways, even more difficult than 2020,” he said. “We saw three factors in play. Those, I don’t think will surprise anyone — COVID, supply chain disruptions and inflation. And each of those three factors are lingering into 2022 and looks like they’re going to present, at least for the first half of the year, some ongoing challenges.”

“It’s incredibly difficult to get enough people to fill jobs and when you get them, to keep them,” he said.

On the input cost side, Mr. Harig said challenges extend far beyond the realm of just ingredients.

“This isn’t just in the commodity level,” he said. “This is also areas you wouldn’t expect like packaging, that is an aspect we often take for granted. When we get our products, it comes wrapped for food safety, freshness, different reasons. We often don’t think about why that is and how that product gets there, but packaging has been a huge challenge for us.”

The food sector has been the subject of elevated scrutiny because of higher prices, but Mr. Harig said food price inflation is not an outlier in the current economy.

“I would say that if you look at inflation at the economy, generally, food is actually pretty on par with where we’re at,” he said. “People feel it more, right? Not everyone’s out there buying a TV or buying a car. Pretty much everyone’s going to the grocery store. They tend to feel food price inflation in a way they don’t feel other categories…

“We understand the impact it has on consumers. I think it should be apparent and clear, this is an economy-wide problem that everyone has to deal with and supply chains, broadly that have been impacted, not-specifically food.”

Higher prices have not prompted consumers to “trade down” to lower price options, Mr. Harig said. Such shifts may yet occur, and some preliminary signs have emerged that it will, he added.

“The weekly market baskets are staying pretty consistent,” he said. “Based on some January data we’ve seen from industry partners who do this work, we’re starting to see changes in that consumer market basket. There’s been a slight decrease in chicken breast sales. It’s the ‘canary’ that lets us know we’ll see behaviors. For January and February, as we get good data in, we’ll see good changes in consumer behavior that reflects the impact of inflation and people trying to adjust for it.”

Food prices in aggregate will rise 2% to 3% in 2022, and 3.5% to 4.5% for food away from home, said Matthew MacLachlan, an economist with the Economic Research Service, USDA, Washington.

“In 2021, we observed high inflation in food and mostly across food categories,” Mr. MacLachlan said. “Price increases were largest for meat and they increased more than any other categories. Prices didn’t decrease for any product category.”

Over the past five years, food prices have risen a total of about 11%, slightly less than housing and transportation but slightly more than medical care and the average for all items.

Offering background on the food price picture, Mr. MacLachlan noted that prices for food at home and food away from home moved in lockstep for decades but diverged about 15 years ago.

“Following the financial crisis of 2008 and 2009, food at home prices have grown more slowly than have food away from home prices,” he said. “Now, during the pandemic, the growth rate has somewhat converged with food at home prices increasing at a faster rate than the recent average.”